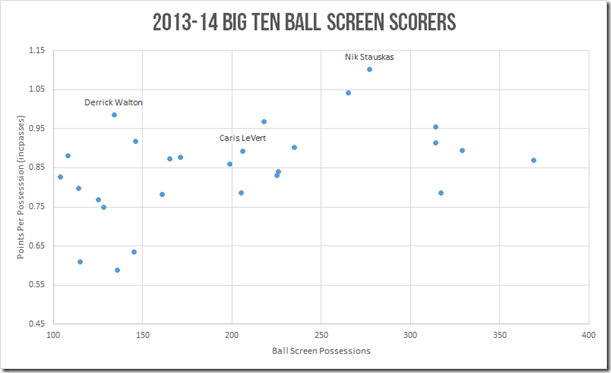 @connorjw1220: Can Caris LeVert be as effective coming off ball-screens as Stauskas was this past year?

Michigan scored .893 points on LeVert’s ball screen possessions compared to Stauskas’ 1.101 points per possession on ball screens last season. Stauskas’ efficiency was elite in the ball screen game, even better than Trey Burke as a sophomore.

The chart above shows that LeVert was already one of the more efficient ball screen scorers in the Big Ten last season (>100 possessions), but Stauskas was on another level.

@jlustig22:  How big of a concern will rebounding be next yr? It’s always been a weakness but their off efficiency overcame it. Can that continue?

Michigan doesn’t need to be a great offensive rebounding team. The Wolverines were ranked 242nd nationally in offensive rebounding, but had the best offense of the last 12 years according to KenPom.com. Michigan probably isn’t going to be any better on the offensive glass this season and probably isn’t going to have the best offense in the country for the third year in a row, but I’m not too worried about the offense.

Defensive rebounding is another story. Michigan managed to be at least proficient on the defensive glass over the last four years: ranked 124th, 71st, 99th and 65th nationally in defensive rebounding from 2014 back to 2011. The constant over those four years was Jordan Morgan. Morgan, McGary and the rest of Michigan’s front line is essentially gone and left in their place is a group of players that have never really been praised for their rebounding chops: Mark Donnal, Ricky Doyle, Max Bielfeldt and DJ Wilson.

Kameron Chatman could be a boost in that department as he’s always been a good rebounder for a skinny wing forward, but getting passable defensive rebounding from the frontcourt will be a top priority leading up to the season.

@Pennington_Lee: When do you expect the deep NCAA runs to pay off in recruiting? Do they necessarily need top talent to continue the run of success?

I realize that Michigan has had some high profile recruiting misses lately with prospects that were supposedly Michigan leans at some point, but Michigan’s recruiting hasn’t slipped completely.

Michigan’s starting lineup next season will probably be comprised of entirely top-100 recruits or projected lottery picks with Walton, LeVert, Irvin, Chatman and Donnal. The best player of the bunch was ranked 215th out of high school and decomitted from Ohio University. Michigan added some late commitments from under the radar prospects this year and while it would be silly to expect them to develop into All-Big Ten caliber prospects, it’s also probably too early to judge them.

Michigan’s recruiting priorities have to be finding an impact wing guard replacement for Caris LeVert in the class of 2015 and putting together an impact class in 2016. With seven offers already outstanding in 2016, it’s clear that Michigan expects a big class and there are plenty of high-profile targets with legitimate mutual interest. The 2016 class is the class that will usher in the next generation of talent in a similar fashion to the 2012 group.

@jmstern23: For those that haven’t seen Kameron Chatman’s entire game, why should we be excited for his freshman season?

Chatman is a top-30 recruit and a very unique prospect. He played well on the Nike EYBL circuit before his senior season, averaging 16 points, 10 rebounds and three assists per game, and then led his Columbia Christian team to the Oregon State Championship in the small school 1A division.

Playing against lower-level competition during his senior year could affect his development a bit, but he should be expected to make an impact in Ann Arbor next season. He’s not a player that’s going to take 15 shots per game as a freshman, but he is the sort of player that could slide in naturally as a secondary option in Michigan’s offense.

He’s a picturesque fit for the perimeter-four position in John Beilein’s offense. He’s still skinny to play in the front court, but around 6-foot-7 and 200 pounds he should be able to hang in there and he’s a great fit because he’s a natural lefty. The four spot in Michigan’s offense generally plays on the right side of the floor into the middle, emphasizing the importance of a strong left hand.

Chatman isn’t a player that’s going to change the game with his athleticism, but he’s extremely versatile. He can do a little bit of everything: pass, rebound, handle, drive and shoot. Michigan doesn’t need him to be ever dominate the ball, but if he can make the right pass and the right shot on the wing he’ll help open things up for Caris LeVert, Zak Irvin and Derrick Walton.

The biggest question facing Chatman will be the one that faced Glenn Robinson III: can he knock down open corner threes? The corner three is pivotal to Michigan’s offense because it creates the spacing necessary to run the offense. Chatman shot the ball poorly in EYBL play, but seemed to knock down threes consistently whenever we watched high school footage of his senior year.

‏@aaronVD34: Biggest surprise player this year that no one is talking about?

I’m going to cheat and go with two players: Muhammad Ali Abdur-Rahkman and Aubrey Dawkins. Both players have the skill sets to help connect the dots in Michigan’s rotation next season. Neither player is likely to be a star, but it’s tough to put together an complete sustainable rotation without realizing how they fit.

Abdur-Rahkman gives Michigan a backup guard that can play a number of positions, handle the ball, attack the rim and play defense. Michigan’s only backup guard or wing under 6-foot-7 is Spike Albrecht and someone needs to backup the two spot.

Dawkins provides a bit of athleticism and lineup flexibility as well. He projects more in the three or four spots as a 6-foot-6 player with great athleticism. Dawkins isn’t Glenn Robinson III, but he could help fill some of the sort of production that Robinson supplied. If he can finish around the basket and knock down threes consistently, he could be a nice role player in 2015.

Neither player will start, but both players might be necessary to fill a role in the same way that Spike Albrecht and Caris LeVert did as freshmen.