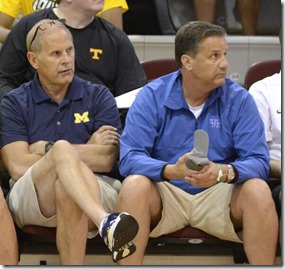 John Beilein opened the July evaluation period by focusing on two of his top class of 2016 targets: Derryck Thornton Jr. and Tyus Battle.

Beilein was in Philadelphia at the Reebok Breakout Challenge, flanking Kentucky head coach John Calipari on Wednesday and Thursday while watching the talented guards.

Thornton was once again the star of the camp circuit and received praise from most media outlets. “Thornton has had an unreal past few weeks. No one at Reebok Breakout Classic has been able to check him,” Scout.com’s Evan Daniels tweeted. “Best way I would describe 2016 PG Derryck Thornton is “effortless”. Gets what he wants, when he wants. Already a major offensive talent,” Jon Rothstein added. Adam Zagoria relayed a scouting report from a Division I coach in attendance. “You get him on your team and you become a really good coach. Quick.”

For his part, Thornton reported that he’s done with campus visits this summer. The only previously reported likely visits on his schedule are to Kentucky for Big Blue Madness and to Michigan for a football game in the fall.

“I’ve only been to two campuses this summer [Michigan and Kentucky] and I think I’m done taking visits for the rest of the summer,” Thornton told ZagsBlog at the Reebok Classic Breakout at Philadelphia University. “Both visits were great. I thank God for what he’s doing for me because without him, I wouldn’t be here. Everyone is doing a great job right now.”

Thornton also told NBCSports that he’s not worried about his recent attention affecting his play.

“I’m trying not to, I’m really just trying to focus on my game,” Thornton said. “I wasn’t into it when I wasn’t as known and I’m not into it now.”

Thornton, the No. 11 recruit in the Class of 2016 according to Rivals, finished with 10 points, seven assists and five boards while leading his team to a two-point win. He controlled possession of the ball, knocked down a couple of mid-range jumpers off the dribble and was able to get into the lane and draw defenders while finding teammates Markis McDuffie and Tyus Battle open on the perimeter. It was somewhat reminiscent of the way a certain point guard for the Los Angeles Clippers plays, and that’s not an accident.

“I watch a lot of film on point guards like Chris Paul and they get a lot of their points off of little pull-ups in the paint,” Thornton told NBCSports.com.

(Thornton) picked up right where he left off after standing out at the Steph Curry Camp to start the month. Thornton was a true floor general, in complete control every time he stepped on the court and able to impact the game in a variety of different ways. He handles the ball on a string and excels at making a variety of different reads off the pick and roll. He holds his dribble going through the lane as well as anyone in the field, just waiting on the defense to break down and reveal open receivers. He even shot the ball well here, making a series of pull-ups as well as rhythm 3s. Thornton took unofficial visits to both Kentucky and Michigan last month and was followed by both Kentucky’s John Calipari and Michigan’s John Beilein here.

Tyus Battle also stood out, according to reports:

The 6-foot-5 wing is a physical specimen, and he showed off his improved game and frame on Wednesday night. Scoring 11 points on 3/6 shooting from the 3-point line, the Team Scan guard has obviously been working on his perimeter game to go along with his deadly slashing ability. With offers from the likes of Louisville, Kentucky & Arizona, it’s obvious that he’s an elite prospect in the rising junior class.

Beilein’s next stop was in Indianapolis where class of 2016 big man Jon Teske was playing at the adidas Invitational with his Team Work AAU team. Te

Michigan and Ohio State are thought to be near the top of the pack in Teske’s recruitment and Jeff Meyer also watched Teske earlier on Thursday. Teske recently discussed his recruitment with Cleveland.com, explaining that he has some Michigan connections as well.

“My dad grew up in Willoughby, so he’s always been an Ohio State fan, but we also lived in Michigan for a few years so I have a Michigan and Michigan State feeling too,” Teske said.

Teske says that both coaching staffs liked the way he shot the ball for someone who is 6-foot-11. And while, the interest is ramping up for Teske, he doesn’t want to make a decision soon.

“I just want to keep all of my options open right now,” Teske said.

Matt Moyer is one prospect that could be on the cusp of earning a Michigan offer. He looked very good at Michigan’s College Practice Camp in early June and was one of the standouts at Reebok’s Breakout Classic this week. City of Basketball Love discussed Moyer’s game and provided an update on his recruitment.

A 6-8, 205-pound forward with a lean, athletic body, Moyer was an impressive-looking prospect in his game at Breakout’s opening night even before he stepped out and knocked down a 3-pointer with ease. While he’s only a rising junior, Moyer’s been on a number of college campuses already. He’s seen Notre Dame, Virginia Tech, UNLV, Michigan and Xavier, and has a good idea of what he’s looking for in a college.

Doesn’t seem like that’s going to be much of a problem.

The 6-foot-8 Ohio native was impressive on Wednesday night by showing off his versatile skill set to the college coaches and media in attendance. Long and athletic, he was active around the rim, and even knocked down a triple as well. Look for his recruitment to really take off if he continues to have a big week.

Moyer’s AAU teammate, Michigan offeree Seth Towns, was also in attendance at the Reebok Breakout Classic and had 5, 14, 5 and 8 point performances.

Much of the attention in Las Vegas over the last 48 hours has focused on where in world LeBron James is going to end up, but his Nike Skills Academy also features many of the top prospects in the country.

Jalen Coleman recently trimmed his list to six schools and discussed where things stand with RunRebs.com.

Coleman is already known as one of the best shooters in the country, but he’s working on his ballhandling skills at LeBron’s Skills Academy.

“Jalen Coleman playing a lot of point guard tonight,” Jeff Borzello tweeted for CBS. “Has gotten others involved, still was able to knock down shots from the perimeter.”