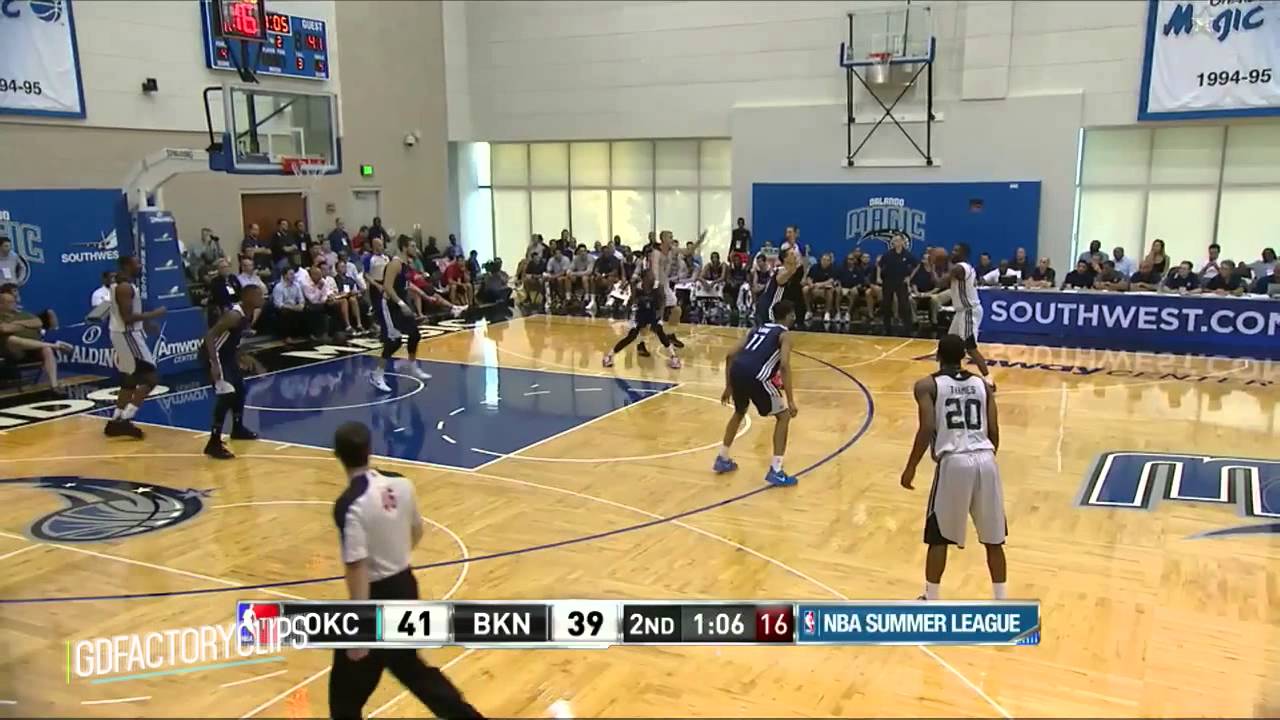 Mitch McGary was a star of the Orlando Summer League, averaging 15 points, six rebounds and 1.3 assists in four games. McGary’s top performance was a vintage 18 point, 13 rebound and two assist showing in a win over Brooklyn.

“It feels really good you know,” McGary said when asked last week what it felt like to be on the floor again. “It’s been a long time coming just to get back on the court and it felt good to help the team win.”

McGary is healthy and looks like he could fight for a spot in Oklahoma City’s rotation off the bench.

“First-rounder Mitch McGary reportedly looked healthy and a series of encouraging performances was highlighted by an 18-point, 13-rebound line against the Nets,” Sports Illustrated wrote. “The Thunder will hope McGary can fill a garbage-man type supporting role as they mount another playoff push.”

McGary did a little bit of everything in summer league action, knocking down a few spot-up jumpers, playing in the post and even getting involved in transition as he loves to do. But at the end of the day he knows that he has an immediate chance to make an impact with his effort, hustle and rebounding – areas where he’s always thrived.

“I’m just trying to play with a lot of energy, stay active and trying to get my team extra possessions,” McGary told the Thunder website.

Nik Stauskas made his summer debut on Friday night and made his first shot just 17 seconds into the game.

“For some reason, [even during] my time at Michigan, it was the same thing – if a play was drawn up for me for the first play of the game, I’d normally knock it down,” Stauskas told Kings.com. “When I saw [the] first one go down, it [gave me] a little bit of confidence, and from there on, I was just playing.”

Michigan’s highest drafted player since Jamal Crawford finished with 14 points and handed out three assists in his first professional action. Stauskas followed that up with 10 points and an assist on Sunday, going just 3-of-10 from the field and 2-of-6 from the free throw line.

Tim Hardaway Jr. is back in action in summer league play after earning a spot on the All-NBA Rookie Team last season. Hardaway has played two games and is averaging 22.5 points, 2.5 rebounds and an assist per game with the Knicks.

“The Knicks guard has dominated the first two games scoring the ball like few others,” NBA Draft.net wrote. “He is shooting the ball well from outside and he is getting to the rim really easily scoring and getting fouled. He already had big games in the league last year and defiantly he seems more mature in his game taking advantage of his athleticism.”

Trey Burke also made his first appearance in this summer on Saturday night, scoring 11 points, handing out four assists and grabbing four rebounds (via lauraine at dress head). Burke’s struggles last summer were well publicized, but he’s growing more comfortable in the professional ranks and was named to the NBA All-Rookie team last season.

Glenn Robinson III and Jordan Morgan are still teammates in Minnesota with the Timberwolves Summer League unit. Robinson had 7 points, five rebounds and three steals in his summer debut while Morgan scored two points and grabbed a rebound in 13 minutes.

“It’s crazy, the speed of the game is a lot different,” Robinson told the NWI Times after his debut. “I think that’s something I’ve got to get used to, in guarding different positions at this league, whether it’s one through four.”

Robinson is still fighting the same battle that he faced during his time at Michigan – getting pushed up the lineup to the four position.

“We had him at a disadvantage a little tonight, playing at the four, but we know we feel we can do that, play that 3-4 position for us at times,” Wolves Summer League coach Sam Mitchell told the NWI Times. “I thought he did a good job for his first NBA game.”

Robinson is still fighting some of his negative reputation from college and had 8 points on 2-of-7 shooting to go along with four rebounds and four turnovers in a 67-61 loss Sunday night to the Washington Wizards.

Darius Morris scored 12 points in 14 minutes off of the bench for the San Antonio Spurs in their first action of the summer and had 6 points, five assists and five rebounds off the bench in San Antonio’s loss to the Cavs on Sunday.

Morris is looking to rebound and find a place in the league after bouncing around with the Philadelphia 76eers, LA Clippers and Memphis Grizzlies for a total of 27 games last season. He finished the year with the Rio Grande Valley Vipers in the NBA D-League where he averaged 17 points, seven assists and four rebounds per game and set a NBDL playoff record when scored 51 points and handed out 18 assists.