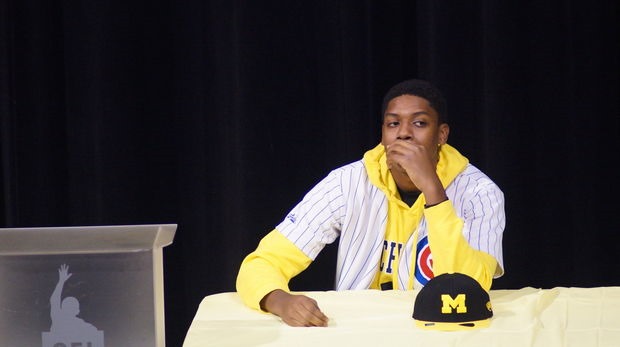 As far as high-profile recruitments go, Kameron Chatman’s commitment to Michigan was about as uneventful as can be.

Chatman didn’t hold a press conference or a TV special, he kept things simple as he gave his pledge to John Beilein and his entire assistant coaching staff in-person during a home visit. The 6-foot-7 forward’s decision came as something of a surprise as he chose to travel 2,400 miles to college rather than staying on the West coast and committing to Arizona as many predicted he would.

But John Beilein got his man and Chatman is a Wolverine. The Portland native and self-described ‘goofball’ is one of the more unique prospects in the country. Ranked 27th nationally, he’s also the second highest rated recruit that John Beilein has landed in Ann Arbor (according to the 247 Composite Rankings).

As a sophomore, Chatman was just a 6-foot-3 point guard at playing 1A ball at Columbia Christian. But a late growth spurt led to a big summer on the AAU circuit and suddenly he was 6-foot-6 and one of the most coveted prospects in the country. He also opted to transfer to Long Beach Poly for his junior season, where he would eventually be ruled ineligible due to transfer regulations and was forced to play junior varsity basketball. Sitting out his junior season was a setback, but Chatman had already arrived on the national radar.

He returned to the floor in the summer of 2013 with ICP Elite on the Nike EYBL circuit and put up impressive per-game averages of 16 points and ten rebounds per night. He also stopped by Michigan’s College Practice Camp, making the cross-country flight to show off his skills in Ann Arbor and earn an offer from John Beilein.

Chatman earned invitations to all of the requisite summer All-American camps including the LeBron James Skills Academy and NBPA Top 100 Camp. A few months after the summer wound down, Chatman gave Michigan his commitment. Chatman opted to return to Columbia Christian in Portland for his senior season and led the Knights to 24-5 record and a State Championship. He averaged 21.5 points, nine rebounds and five assists per game during his senior year and earned invitations to the Jordan Brand Classic and USA Basketball’s U18 Training Camp.

RELATED: Getting to Know Kameron Chatman

Chatman will arrive in Ann Arbor with big shoes to fill after Michigan lost three players to the NBA Draft, but the harder part of the puzzle is figuring out where he fits and what position he will play. Standing 6-foot-7, he isn’t an overwhelming athlete, but he can influence the game in a multitude of different ways. His length and versatility should provide John Beilein with a perfect base to craft into his future wing player.

Chatman will always have those point guard skills that he honed as a younger player. He has the vision and the ball handling ability rarely seen in a player standing 6-foot-7, but he’s not likely to be a point guard yet. His ideal projection to the next level is likely to follow the mold of former UCLA and future San Antonio Spurs forward Kyle Anderson. Anderson isn’t the best athlete, but he can pass, score in spots and knows how to run a team. As far as next season goes, Chatman is likely to play the four position in Michigan’s offense.

“Let us talk about the four spot.  We don’t even like saying ‘the four spot.’  [Kameron Chatman] will be a right side guy because he is left handed and he will be able to just flow and play and fit in with the offense perfectly when he is down in the wing position, a little bit like Novak, as a lefty,” Michigan assistant coach Jeff Meyer explained on WTKA . “He was a lefty that played on the right side, so you think about where Glenn played these past two years.  You think about where Kam can fit in best with Glenn’s departure, it is definitely on that right side as a wing player.”

Chatman’s perimeter shooting stroke has been a question mark since he shot 17% on the Nike EYBL circuit, but he’s shown signs that he’s a much better shooter than that. Most video footage from his senior season features him knocking down the three and he’s a very good shooter in the 14 to 18 foot range. His ability to shoot the ball at a high-major level will be what separates him from a useful player or a future star.

Michigan might need to lean heavily on Chatman as a freshman, but not in the ways you might think. The Wolverines have scorers (Caris LeVert and Zak Irvin) and a reliable point guard (Derrick Walton), but Chatman could be the glue that holds everyone together. Look for Chatman to make the extra passes, handle the ball enough to defenses honest and spread the floor. On the defensive end of the floor, he should look to make an impact as a rebounder – an area where he’s excelled throughout his prep career.

Chatman is the odds on favorite to replace Glenn Robinson III in Michigan’s rotation, but he’s a very different player. Michigan will lose athleticism at the four spot, but gain ball skills and versatility. Chatman’s insertion in the rotation will change the dynamic of Michigan’s offense and it will require some other roles to shift as well.