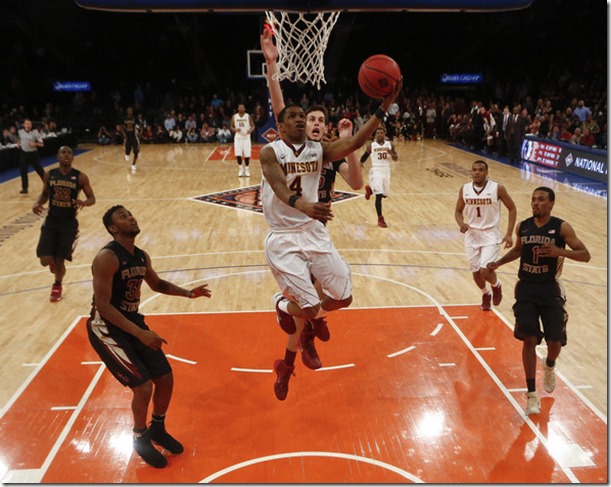 Welcome to Big Ten’s Best, a look at some of the Big Ten’s specialists returning for the 2014-15 season. First up, we breakdown the best returning pick and roll players in the Big Ten. These lists are based on last year’s numbers, but involve some prognostication as well.

Terran Petteway was a dominant ball screen scorer last season and his expectations should be even higher as he returns for his junior season. Petteway is much more of a scorer than a distributor on pick and rolls, he only passes on 27% of his ball screens, but he’s remarkably efficient. Petteway had an impressive 52.1% aFG% when shooting off of ball screens last season and had the ball in his hands constantly. His forte is to shoot the ball off the dribble when coming off the screen, but he’s also capable attacking the basket and even finishing with a runner. When he passed, it was usually to his pick-and-pop options last season, mainly Walter Pitchford. Nebraska will try to get Petteway more help this season (he accounted for 32% of the Huskers’ offense), but expect him to still feature prominently in the high ball screen game in 2015.

The smallest player on this list, Mathieu doesn’t have the ideal size to pass over the hedging defender so it’s not surprising that he’s only average at finding the roll man (40th percentile). What Mathieu is able to do is use his quickness to create offense for himself, usually by getting two feet into the paint and breaking down the defense. Mathieu is able to get to the middle of the floor and then find a spot up shooter (60% of his ball screen passes) or attack the basket with surprising efficiency or knock down the mid-range jumper.

Yogi Ferrell had a terrific sophomore season, but Big Ten fans should worry because there’s still so much room to diversify his game. Ferrell was just average at finding the roll man (29th percentile) and distributing off the ball screen (45th percentile), but he was excellent at creating his own jump shot attempts in high ball screen situations. Indiana fans are likely familiar with the typical Ferrell ball screen: Yogi uses the screen to create space and then fires up a jumper off the dribble. Two-thirds of Ferrell’s ball screens were off the dribble jumpers and he was effective at knocking them down. In his junior season, look for Ferrell to start rejecting the screen, distributing more efficiently and even attacking the basket.

Ferrell’s efficiency isn’t quite as high as some others on this list, but he led the league in PNRs in 2014 and should improve with better talent around him this season.

One of two players on this list that passes more than he shoots, Traevon Jackson is one of the more under-appreciated guards in the country. Jackson does a great job of finding the roll man – often times Frank Kaminsky on the pick-and-pop – but he also is a very good finisher when he attacks the rim. Jackson finds the roll man more often than anyone else in Big Ten, but he also grades out in the 85th percentile when looking for his own offense. Perhaps most impressive is the fact that Jackson shot 70%, scoring 35 points in 20 possessions when he drove to the basket off the ball screen last season.

LeVert is a unique player because he’s actually more effective in pure isolation situations than when he has a ball screen. That’s not a big surprise given that the 6-foot-6 wing’s shiftiness is one of his top assets. However, LeVert will be trying to replace the best pick and roll player in the Big Ten last season, Nik Stauskas, and is certain to see his fair share of high ball screen action. With increased responsibility, look for LeVert to improve his ability to stick the dribble jumper off the ball screen next season. He had just a 28.4 aFG% on ball screen jumpers last season. He’s much more effective of attacking down hill and getting to the rim or finishing with a floater.

He’s never been great finding the roll man (and his roll options from last year are gone), but Walton is great at getting in the lane and finding spot up shooters. He might miss the consistent shooting of Nik Stauskas on the wings, but we expect his game to diversify. He was also efficient knocking down the three off the pick, shooting 61.4 aFG% when shooting dribble jumpers off the pick (92nd percentile), and that’s an area where John Beilein wants him to increase his range.