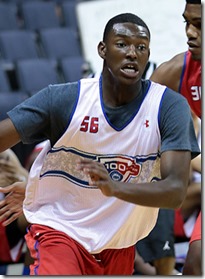 Jalen Coleman has been the top guard on Michigan’s recruiting radar for months. His status hasn’t changed and Michigan is expected to be in Coleman’s top group until he decides, with Notre Dame and Illinois widely regarded as its top competition. He caught Rivals’ eye in Las Vegas

A four-star combo guard, Jalen Coleman has long been known for his shooting and scoring. At LBJ, he assumed point guard duties and looked pretty effective running a team. Playing off the ball as a scorer is still his specialty, but if he can run a team for stretches he becomes much more valuable. Notre Dame’s Mike Brey was watching closely and the Irish are heavily in the mix here along with others like Illinois, Michigan and UNLV.

But Michigan’s recruiting board continues to grow as well and Florida guard Prince Ali appears to be steadily rising to the top of that list. Ali was spectacular at the LeBron James Skills Academy and added offers from Maryland, UCLA and Louisville. Michigan is still one of two schools recruiting Ali the hardest and he wants to visit Michigan this fall.

“Prince Ali is shooting the ball with confidence,” Evan Daniels tweeted. “Throw that in with his athleticism and ability to make plays off the bounce is a good combo.”

Ali’s AAU coach updated his list after the Louisville offer:

“Right now it would be Louisville, UCLA, Michigan, Arizona and Indiana, no particular order,” Durham said.

“He wants to take his visits and make the right choice,” said Durham. “Nothing is set up yet. We’ll start scheduling them after July, putting it in order and get it done. I think most important will be relationship with the coach and playing (time).”

Kenny Williams also played well in Las Vegas and named Michigan as one of the five schools recruiting him the hardest along with Georgetown, VCU, UNC and Indiana. Williams plans to trim his list to five and set official visits after July.

Josh Sharma visited Michigan with his Northfield Mount Hermon prep school team earlier this spring and could be considering a return trip, according to a report from Rivals.com.

Sharma said they started off at Penn State before going to Ohio State, Xavier, Purdue, Notre Dame, Illinois, Marquette, Wisconsin and ended at Michigan.  Figuring out which schools to officially visit. He used one of his five visits to go to Wisconsin this past January.

“I have talked to Illinois for a while and I like Michigan,” Sharma said. “I also like Notre Dame. Out of the schools that I didn’t visit (in the midwest), I like Boston College, Stanford and California.”

Rivals.com ranks Sharma the No. 75 overall player in the nation in the class of 2015. Sharma has great athleticism for his size and college coaches like his down the road potential. He hopes to use the adidas Unrivaled camp to get better.

“I have been to adidas Nations camps before and they are somewhat similar,” Sharma said. “I know I’m playing against great competition.”

Sharma attends the same prep school that produced Spike Albrecht and is one of the top big man targets on Michigan’s 2015 board.

TJ Leaf’s top four schools this spring were Michigan, Indiana, UCLA and Arizona – all four have offered and are still firmly involved in Leaf’s recruitment, but others are also getting involved. Louisville and Xavier offered, while Duke and Michigan State have also been keeping tabs. ESPN called Leaf the ‘most skilled big man’ at the Adidas Top 100 camp:

He’s one of the most skilled big men in the country with the instincts to utilize his talent as a face-up forward. He knocks down long-range jumpers with comfort and confidence and can drive the ball efficiently to the basket against opposing big men. His ability to see the floor and pass the ball is impressive at his age. Offers are flowing in as Florida, UCLA, Arizona, Arizona State, Texas, Michigan, San Diego state, Indiana and Cal have extended offers. Duke, Stanford, Michigan State and Louisville are showing interest.

It was Towns who led the way with 13 points in the win, though he had plenty of help from Malik Harris (11 points) and Moyer (nine points) in a low-scoring affair.

Both Towns (Norland HS) and Moyer (Gahanna Lincoln) are 6-8 combo forwards with high-major offers already under their belts. Towns added one from Iowa to Michigan, Rice and more after the tournament, while Moyer isbeing chased by the likes of Virginia Tech, Wisconsin, Southern Cal, UNLV and more.

It’s their versatility, length and ability to score from all three levels that had schools from all over the country following their games throughout the weekend at both Competitive Edge and Philadelphia University.

“There are hundreds of kids in the country that can score and defend, but can you do all the other little things?” he asked. “They’ve done a really good job with that, understanding that if you’re going to be a top-50 recruit, top-100 recruit and get the big-time exposure, you’ve got to be the whole package, you can’t just be one-dimensional on one thing.”

Rivals.com raved about Moyer’s impressive play throughout the first week of the evaluation period.

Putting 2016 forward Matthew Moyer into the top 100 for his class is looking to have been a wise decision. The 6-foot-7 forward simply has a knack for recognizing his matchup and attacking accordingly. If he draws a smaller defender he plays as a skilled four, with a bigger guy he goes to the wing. He can shoot, competes for rebounds at the rim and is a transition finisher. Moyer mentioned offers from Iowa, UNLV, USC, Dayton, Detroit, Xavier, Virginia Tech, Wisconsin, Butler and Air Force to go with interest from Michigan, Ohio State, Miami, Michigan State, Arizona and Arizona State.

Moyer told LandGrantHolyGrant that he’s hoping for offers from Miami and Michigan:

“Miami (FL) and Michigan,” Moyer said of the two schools that he would like to be offered from. While Moyer’s AAU teammate and best friend Towns received an offer from the Wolverines earlier in the summer, Moyer noted that he would like to play in a “high tempo” system that plays specifically to his strengths.