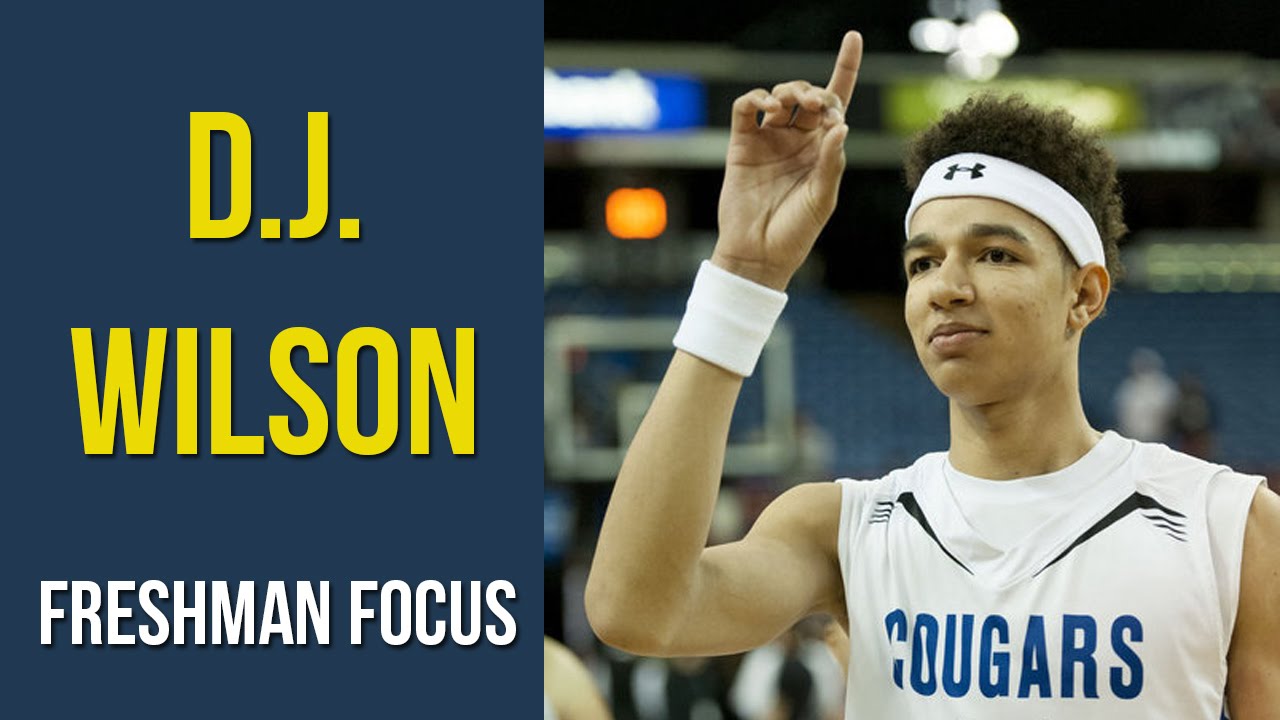 Freshman Focus is a UM Hoops series profiling each of Michigan’s six freshman on the 2014-15 roster. We examine where each player fits into Michigan’s system and also put together a video scouting report. Today: DJ Wilson. Previously: Kameron Chatman

DJ Wilson wasn’t the first stretch four that Michigan recruited in the class of 2014. He wasn’t even on Michigan’s recruiting radar until July before his senior season. But once he caught John Beilein’s eye at the NY2LA Invitational in Milwaukee, his recruitment progressed quickly. Wilson made it to Ann Arbor for an official visit in the fall and accepted a scholarship offer from Michigan.

Wilson fell off the radar during his junior season when his rapid growth spurt (he grew from 6’6″ to 6’9”) resulted in a series of back injuries (a stress fracture of the fifth lumbar vertebra in his lower back and lingering pain/inflammation). He wasn’t a 6’6” combo forward tweener anymore — he had legitimate size — he just couldn’t play basketball.

The stretch four spent the better part of three months in a back brace that went from his hips to his chest and missed most of his junior season. Some West coast schools – notably Gonzaga, USC and Cal – had kept tabs on him during the injury, but he was largely unknown nationally before his final summer of AAU play.

After a couple big summer performances in Milwaukee, Wilson was firmly on Michigan’s recruiting board board. When the offer came, he couldn’t’ say no.

“(Michigan) was the best of both worlds as far as the basketball team and where that is, and being the cream of the crop academically,” Wilson said after he picked Michigan. “I couldn’t go wrong.”

RELATED: Getting to Know DJ Wilson

After committing to Michigan, national scouts paid attention. Wilson’s Capital Christian team played in a number of high profile games, including the Max Preps Holiday Classic, and national scouts took notice of Wilson’s play. He rose steadily up national recruiting rankings and led Capital Christian to a 28-4 record while averaging a double-double per game. When the dust settled, Wilson was a four-star prospect and ranked in the top-100 by most media outlets. .

Wilson stands 6-foot-9 with an impressive 7-foot-3 wingspan, but has just 200 pounds on his frame. He has an above-average jumpshot, but he also is more than capable of making an impact blocking shots and crashing the glass. Wilson’s ability to make an early impact is going to depend on how much strength he can add between June and November. Once he can add that weight, the sky is the limit for him in Michigan’s system. He can stretch opposing defenses with his shooting ability, he can drive past larger defenders and he can post up and shoot over smaller defenders. While he’s a good rebounder at the high school level, achieving it at the college level might be difficult at his current weight.

“That was a big thing for me. We sat down and talked about it,” Wilson said after committing. “With Glenn Robinson leaving, there’s going to be a void at that four position, and coach said that’s probably going to be the position I’m playing, the three and four. It’s an uptempo offense, so all I have to do is get the rebound and outlet, or if I don’t have an outlet, I can push the ball in transition, which is what I’m doing right now in high school. It was just a perfect fit for me, especially seeing as how I’m going to be playing with Kam (Chatman)”

Wilson won’t reach his full potential until he can add 20 or 30 pounds, but ready or not, the opportunity is there for him this season. Michigan doesn’t have any proven options at the four or five positions and it’s all hands on deck. In an ideal world, Wilson would probably be penciled in for a redshirt as a freshman, but the Wolverines might not have that flexibility.

Kameron Chatman, Aubrey Dawkins and (in a pinch) Zak Irvin are the primary options at the four. It’s hard to envision Wilson not finding his way into that mix. There’s also the possibility that he could factor in at the five position. Despite his slender build he has the length to play that spot in a pinch, especially if Ricky Doyle, Mark Donnal and Max Bielfeldt struggle or get injured.

Wilson probably isn’t perfectly suited to make an immediate impact at any one position, but he has too many skills to be discounted from Michigan’s rotation just yet.

“D.J. is exciting because he has got this raw potential,” Michigan assistant coach LaVall Jordan said on WTKA. “ He is 6-9; he has a 7-2 wingspan and he is a skilled player for his size.  He can handle the ball on the perimeter.  He can shoot the basketball from three and then he can go down and post.  He will rebound and he’ll block a shot.  He’s active defensively.  His biggest deal is going to be the weight room. Jon Sanderson is going to be key to his success translating to this level.  He’s got to get stronger.  Similar to Caris LeVert, for his size, he has got to add weight.  He has got to get a college meal plan and a college weight and strength training plan.  We’re really excited about what he can do and what his potential is if he maximizes it.”