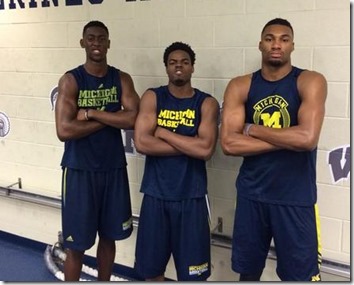 Michigan updated its roster for the second time this month and has now published heights and weights for all incoming freshmen and returning players.

Caris LeVert is listed at an impressive 6-foot-7 and 200 pounds after entering college two years ago at 6-foot-5, 165 pounds. LeVert underwent foot surgery this offseason, but is expected to be getting back close to health.

In a YouTube video and interview published on June 25th, the 6-foot-7 wing reported that his rehab is going smoothly.

“Surgery was (in early June) on the left side of my foot… It went well, it was about an hour long and I don’t really remember anything from it. They knocked me out with anesthesia, but it was a good surgery.

“I’m doing a lot of recovery stuff, a lot of bike and underwater treadmill, stuff like that. Just trying to take some weight off my foot right now and stay in shape at the same time.”

LeVert is expected to be fully healthy and ready to participate in Michigan’s Italy trip this August.

Zak Irvin also made an impressive leap physically as he’s now listed at 6-foot-6, 215 pounds, up from 200 pounds last season. Some freshman measurements appeared to have been adjusted from their original listings. Ricky Doyle is now 6-foot-9, 245 pounds while Muhammad Ali Abdur-Rahkman is listed at 6-foot-4, 175 pounds rather than his originally listed 200 lbs. Redshirt freshman Mark Donnal is up to 240 pounds from 230 pounds last year, while DJ Wilson is now listed at 220 pounds after being listed at 200 pounds out of high school.

Find the full updated roster on our roster page