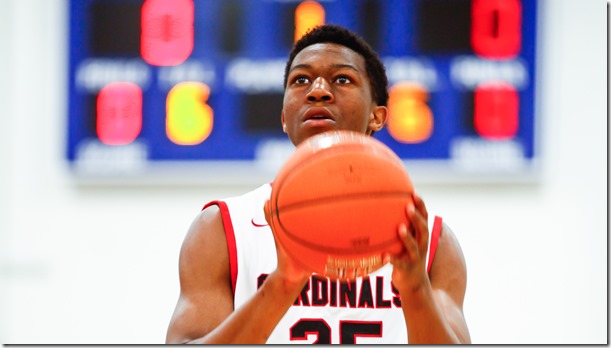 The second evaluation period of July was headlined by the Nike Peach Jam, where Michigan head coach John Beilein spent the majority of his recruiting time throughout the long weekend. 2016 Wolverine offeree Tyus Battle was among the standouts of the event, averaging 14 points per game and carrying his team to the event’s semifinals, but a number of other Wolverine targets impressed as well.

Here’s a rundown of statistical performances from Michigan targets in attendance.

Find more after the jump including notes on Tyus Battle, Seth Towns, Cassius Winston and others.

Battle was a main attraction of Peach Jam, adding a Duke offer in the process, and now holds offers from Michigan, Duke, Syracuse, Kentucky and many others. Eleven 247Sports Crystal Ball projections were made for Battle to Duke after the offer as the Blue Devils are thought to have gained traction in his recruitment.

ESPN was impressed with his critical play after a lackluster EYBL spring:

It’s no secret Battle wasn’t at his best to start the EYBL regular season, but his level of play has risen in a distinctly linear pattern over the last couple of months. And on Saturday night, he turned in a huge performance when the stakes were at their highest to push the Cardinals past Houston Hoops and into the semifinals. More impressive than his team-high 21 points was the timing of his buckets down the stretch of the second half as he rose to the occasion to hit big shots in big moments while also picking his spots to show his length and athleticism in the open floor.

Towns stands out at All-In

It was just a matter of time before Seth Towns had a breakout performance this July. Towns is too big, skilled and talented not to have a top performance at a high profile event. His breakout session finally came this weekend at the Adidas All-In Tournament in Cincinnati.

Towns was one of the most impressive prospects at the event, regardless of class, as the 6’7 forward from the VCC Ohio Warriors was able to consistently score twenty-plus points. Towns shot the ball well from the perimeter, but also showed the ability to put it on the deck and create a tough shot, where is skilled at making shots over smaller opponents. As he gets more confidence and continues to add strength, Towns is one of the more intriguing prospects in Ohio’s loaded 2016 class, as his skill-set makes him the ideal stretch forward at the high-major level. After one of his games, Towns told TDP that Iowa, UCLA and Michigan are the three schools recruiting him the hardest right now. Of those three schools, all but UCLA have already offered Towns a scholarship.

Land Grant Holy Land was also impressed with his play:

Despite what some considered an upset loss to Nova Village on Sunday morning, Towns had his best performance of the weekend, and possibly the year. Scoring a game-high 25 points, Towns was an impossible matchup for the defense, finding success from the three-point line and everywhere in between. Playing in front of Illinois head coach John Groce, Xavier head coach Chris Mack and scores of mid and high-major assistants, Towns left a lasting impression despite VCC’s earlier-than-expected departure. In addition to his high-level scoring, Towns would add six rebounds, three blocks and three steals, showing activity in all facets of the game.

John Beilein was also in to check on Cassius Winston and The Family’s 16U team at the Peach Jam. Winston stood out at the event and drew praise from Future 150.

Winston is everything that you want in a point guard at the next level, and he has shown that on a consistent basis. He is quick, smooth, handles the ball extremely well, sets up his teammates, and he can score on all three levels. Winston had Michigan State coaches Dane Fife and Izzo watching, in addition to coaches from Duke, Iowa State, Kansas, Michigan and others.

Winston wasn’t the only attraction on The Family’s 16U team as 2017 forward Brian Bowne continued to emerge as a star nationally.

Bowen is the next big thing coming out of Michigan in the 2017 class. At 6’6”, he has good length and athleticism on the wing. Bowen is a pure scorer with a smooth stroke. He also finishes around the rim really well. Bowen had the eyes of a ton of high-major programs on Wednesday night, and for good reason.

Matt McQuaid back on the market

Matt McQuaid opted to decommit from Larry Brown and SMU and is back on the recruiting market. McQuaid is considered to be one of, if not the best, shooters in the country and has been very good throughout Nike EYBL and Nike Skills Academy play. McQuaid had previously discussed a Michigan visit before committing to SMU as his father has ties to the Michigan area.

McQuaid, whose father grew up in Midland, is patiently weighing his options, which include a strong, growing interest from the University of Michigan. Head coach John Beilein is supposed to make a recruiting visit in the next few weeks. U-M assistant coach Bacari Alexander has been in regular contact with McQuaid over the past several months.

“It’s a lot of fun. This is something you only do once, so I’m going to enjoy (the recruiting process) while it lasts,” Matthew McQuaid said in a phone interview a few days ago. And, yes, Wolverine fans, McQuaid is open to playing at Michigan, which has an offensive system that fits his style of play.

“John Beilein is a great coach,” Rob said. “Not every program has the right system that fits a player, but Michigan has one of those systems that does fit (Matthew).”

It remains to be seen how much mutual interest there will be between the Wolverines and McQuaid the second time around, but it’s clear that Michigan is still very interested in adding wing shooters to its roster.