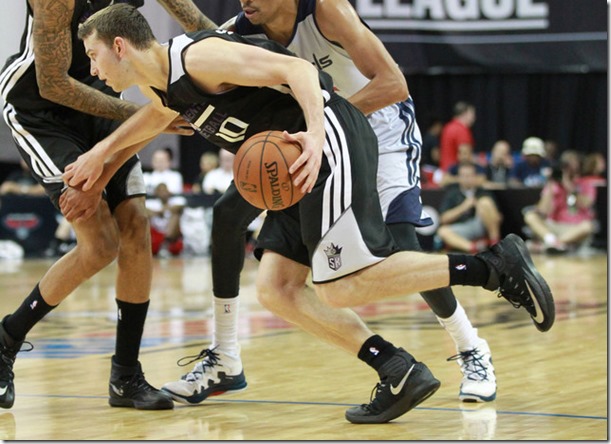 It’s been a productive summer for former Wolverines at the next level. Mitch McGary was one of the stars of the Orlando Summer League before Tim Hardaway Jr. tore up the Las Vegas Summer League.

Hardaway’s NBA career continues to blossom. He averaged 22.8 points, 2.6 rebounds and 1.2 assists per game in Summer League action, checking in as the No. 2 scorer in Las Vegas.

Hardway earned an invite to participate with the USA Basketball select team, but it also appears that the New York Knicks are ready to start building around him as they look to trade other pieces including J.R. Smith and Iman Shumpert

“They’re working on trying to make a move in the backcourt,” the NBA source familiar with the Knicks’ thinking said Sunday.

The idea that the Knicks are trying to make a trade to balance the roster isn’t earth-shattering. President Phil Jackson and GM Steve Mills have mentioned the Knicks have a surplus in the backcourt, with Mills saying last week the Knicks are “heavy” at shooting guard. The issue for the Knicks, of course, is deciding whom to send out in a trade and figuring out what they can get in return in such a transaction.

Tim Hardaway Jr. has been deemed virtually untouchable, per a source.

Hardaway has settled into the NBA better than most would have ever guessed and appears to be poised for a big second season under Phil Jackson.

Nik Stauskas hasn’t done anything earth shattering in summer action, but he’s held his own as the Kings have won the Vegas Summer League Championship. Stauskas is averaging 9.8 points, 2.2 assists and two rebounds per game. He also signed a contract with Nike.

Sports Illustrated’s Chris Mannix says that Stauskas’s summer league performance proves he was drafted too high. “Early on he played pretty well and was making some shots , but as the summer league progressed he started to taper off a little bit,” Mannix said. “You started to see some of the questions emerge a bit: Can he beat guys off the dribble? Can he be a factor defensively? He’s athletic and he can shoot the basketball but at that pick No. 8 overall I thought you could get someone with much more upside.”

Stauskas had 10 points, four rebounds an an assist, going 3-of-6 from the floor in the Summer League Championship game.

Trey Burke has had an up and down professional career thus far after his dominate college years. Burke struggled in his first summer league before starting the season on the injured list with a hand injury. He eventually put together a successful rookie season, earning a place on the NBA All-Rookie First Team. But the Jazz drafted another guard with the potential to play point, Dante Exum, and now Burke struggled in summer league once again. ESPN had a harsh critique of his game in Vegas, where he averaged 9 points, four rebounds and four assists per game while shooting just 30% from the floor.

Despite almost a full season of running point exclusively, Burke has struggled in Vegas. He’s been atrocious shooting the ball this summer, barely connecting on 30 percent of his field goal attempts, and has not really exhibited the type of playmaking that gives you confidence in his ability to hold on to his starting role. With rookieDante Exum flashing glimpses of bona fide brilliance on the court, Burke’s only chance at keeping his starting job is by proving that he and Exum can play alongside one another. That means Burke has to become a more dependable perimeter shooter, especially given that he’s not a good finisher around the rim to begin with. Although Exum’s electric play also comes with the inconsistent shooting expected of rookie, if I’m going to bet on a point guard who can’t shoot, I’ll put my money on the Australian. Burke’s small stature and lack of quickness dictate that he must win the skill war. Otherwise, he’s little more than Wally Pipp to Exum’s Lou Gehrig.

Burke will also participate with the USA Basketball select team, according to a report by Mark Snyder of the Detroit Free Press.

Glenn Robinson III averaged 7.7 points and three rebounds per game in Summer League, finishing the summer with his best performance, 17 points and three rebounds against the Pelicans. The Wolves resigned Robbie Hummel and now have just one guaranteed roster spot remaining. Robinson will be fighting to be signed to that final roster spot, but there are other potential options as well. The Wolves could buyout Alexey Shved to open another spot and there’s also the possibility that Kevin Love is traded.

Jordan Morgan also wrapped up Summer Leauge on a high note, scoring 10 points on 5-of-6 shooting and grabbing a rebound in 18 minutes. Morgan averaged 6 points and three rebounds per game and played in three of six contests.

Darius Morris finished summer action with averages of 9 points, three rebounds and 2.3 assists per game while shooting 48% from the field.