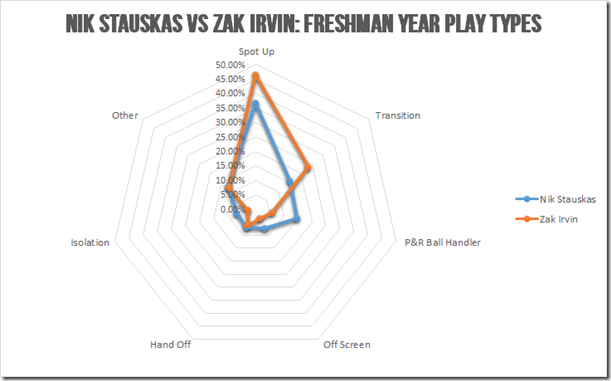 @zgordon5: What does Zak Irvin specifically need to work on the most to become “more than just a shooter”? Did he show that potential in HS? I guess more clearly: should we have a lot of optimism about Zak being able to truly be more than a shooter, or are there red flags?

We’ve established that Irvin was ‘just a shooter’ last year after roughly three out of every four shots he took were threes. I have no doubt that Zak can and will do more than just shoot threes last season, but I’m not ready to predict a Nik Stauskas-level improvement. That’s not meant to be a knock on Irvin, but Nik Stauskas was already a lot more than a shooter during his freshman season. The following chart compares what play types made up each player’s freshman year production. Stauskas logged 379 possessions as a freshman, while Irvin logged 222 but the charts are normalized by percentage of possessions.

There were plenty of similarities between Stauskas and Irvin. Both players were mostly spot-up shooters and were ridiculously efficient. Irvin scored 1.23 PPP on spot up possessions, Stauskas scored 1.28. Both players were secondary options on teams that had plenty of offensive firepower and both players hit a lot of threes. That’s the obvious part of the equation.

But there are also differences. Irvin was an even better transition player with an almost incomprehensible 80.7 aFG% in transition scenarios, but Stauskas showed a lot more ball skills.You can see that Stauskas ran significantly more pick and roll and isolation sets and he also came off more screens. Those elements of Irvin’s game were almost nonexistent as 70% of his offensive possessions were either spotting up or in transition. Stauskas also graded out in the 97th percentile nationally as a ball screen scorer as a freshman – in hindsight this was the statistic that should have warned us what to expect from him as a sophomore – and scored 64 points off of ball screens. Irvin scored just seven points off of pick and rolls and graded out in the 16th percentile.

I have no doubt there’s more to Irvin’s game. He’s showed off a mid-range game and far more ball handling ability during his time in high school – where coincidentally he progressed from a young shooter in Gary Harris’ shadow to the star of Hamilton Southeastern – and I expect we’ll see plenty of that. He’s also added what looks to be a very impressive 15 pounds of muscle.

If I had to pick one player to make a Stauskas or LeVert like jump as a sophomore, it would probably be Derrick Walton and not Zak Irvin, but I do expect Irvin to progress naturally into an expanded role.

‏@Rees5Jason: Do you see a situation where Spike and Walton play together?

Definitely. It’s not ideal to throw two 6-foot tall guards on the floor at the same time, but given Michigan’s inexperience in the backcourt I think we’ll see plenty of it. Albrecht is generally a reliable jumpshooter and is experienced as anyone on the roster. He can handle the ball in pressure situations and knows Michigan’s offense very well. It’ll never be a great defensive lineup with two smaller guards on the floor, but I suspect it’ll be present throughout Albrecht and Walton’s careers.

‏@Gkm13: Who do you think will step up on the defensive end for Michigan?

I think that Caris LeVert has the size and ability to make a major step on the defensive end of the floor. He was Michigan’s primary defender throughout much of last year, but certainly wasn’t immune to a few lapses in play. While he’ll have more offensive responsibilities this season, I still expect his game to mature defensively.

However, Michigan’s biggest concern is probably in the front court, where last year’s roster has vanished. Jordan Morgan was the rock of the Michigan defense for the last four years and there’s no question that his absence will cause problems. DJ Wilson has the best raw ability to help Michigan add a shot blocking presence, but he’s still very skinny. Mark Donnal and Ricky Doyle’s abilities to pick up defensive schemes and clean up the defensive glass will be as important as anything for next year’s Wolverines.

‏@jmstern23: How valuable is the experience that both Muhammad Ali Abdur-Rahkman and Aubrey Dawkins bring to this team as freshman that are as old as most sophomores?

It definitely won’t hurt, especially for Aubrey Dawkins because he played an extra year in the NEPSAC against very good competition. John Beilein is very cognizant of birthdates and generally likes to play both sides of the age curve whether it’s looking for prospects that still have room to grow like Caris LeVert (who is still just 19 years old) or players that might be ready to play small roles early on because they are older and more experienced like Spike Albrecht (turns 22 in August).

Dawkins (turns 20 in May) and Abdur-Rahkman (turns 20 in August) both should be slightly more physically ready to make an impact as a freshman. I suspect that Dawkins might have the upper hand in that department because he played against better (and older) competition at New Hampton. Abdur-Rahkman was on the opposite end of the spectrum as a much older player facing weaker and younger competition. Kameron Chatman and Ricky Doyle both turned 18 this summer and fall closer to the other end of the spectrum.

There’s no secret formula that says one player is more ready to play than another, but I think it’s clear that Dawkins and Abdur-Rahkman both have a fairly defined niche to try to make an impact. Rahkman is a dribble-driver and slasher to provide some relief for Caris LeVert while Dawkins is a finisher and an athlete to provide a bouncier wing option.

‏@imeccamp: Do you believe Dawkins will Start over Irvin? If not , why not?

I think you can pencil Derrick Walton, Caris LeVert and Zak Irvin in as starters from day one and I expect them to start at the one, two and three spots respectively. What happens at the four and five spots is anyone’s guess. Kameron Chatman, Aubrey Dawkins and DJ Wilson should all get ample opportunity to play for starter’s minutes at the four spot. So in that regard I could hypothetically see Dawkins earning significant playing time, but I don’t expect him to knock Irvin out of the starting lineup any time soon.

‏@KleShreen: Who can we expect to be the rotational bigs? With no Morgan/McGary, someone has to step up.

I expect all four to play fairly even minutes in Italy as Michigan tries to figure out what it is working with. The Italy tour (and the 10 additional practices) will help start to sort things out, but this is likely going to be an ongoing battle.

Summer whispers should usually be taken with a grain of salt, but Ricky Doyle seems to have raised a few eyebrows. He arrived on campus early to start working on his body (being listed at 240 down from 250 is probably a good thing) and he’s earned positive reviews in summer workouts. If I had to pick one player expected to take a big step up right now, I might go with the surprise choice and select Doyle.