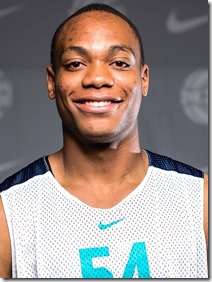 Four-star guard Bruce Brown is one of the latest prospects on Michigan’s recruiting radar after putting together an impressive summer on the AAU circuit.

Brown averaged 14.2 points, 4.4 rebounds and 2.2 assists per game on the Nike EYBL circuit this spring and continued his strong play at the Nike Peach Jam last weekend in Augusta. The 6-foot-4 guard from the Vermont Academy is ranked 42nd nationally in the class of 2016 according to the 247 Sports Composite ratings.

Wolverine assistant coach Bacari Alexander was in Louisville on Wednesday night at AAU Nationals to watch Brown in action. Michigan has been in contact with Brown’s coaches to start the recruiting process and Brown likes what he sees from Michigan.

“I like (Michigan) a lot because it’s not just a good basketball school, it’s also good in academics,” Brown said at AAU Nationals on Wednesday night. “My mom wants me to go to a strong academic school. They’re recruiting me. Not too hard, but it’s alright.”

Despite not having much direct contact with the Wolverines, Brown is already thinking about a visit to Ann Arbor.

“Oh yeah,” Brown responded when asked if Michigan is somewhere he might visit. “I think they said I would visit around September some time.”

Brown listed Iowa State, Providence, Texas Tech, Minnesota, Xavier, Miami, Wake Forest and Boston College as the other schools showing the most interest in his recruitment.

Michigan hasn’t been recruiting Brown for long, but he’s already very familiar with the Wolverine program.

“Pros,” Brown answered when asked what comes to mind when he thinks about Michigan. “Trey Burke was really good, Nik Stauskas is doing his thing now. (Coach Beilein) could make me into a pro and that’s what I want to become.”

Brown said that style of offense will he the most important thing to his college decision. He’s looking carefully at how different schools play the game, whether they move the ball and how he might fit into their systems.

Michigan’s affinity for the ball screen is something that stands out to Brown, who is known for his ability to attack off the dribble.

“I love playing ball screens, I love it,” Brown said. “Just coming off pick and rolls, reading the defense seeing what they’re doing, if the big is open passing it to him and shooting.”

John Beilein was also in Louisville on Wednesday evening, checking in on the King James Shooting Stars 16U team (Derek Funderburk) and All Ohio Red 17U although Jalen Coleman did not play due to illness.

The event is open for college coaches to observe on Friday only and several hundred coaches are expected to be in attendance.

Quotes special to UM Hoops from Alex Bozich of Inside the Hall.