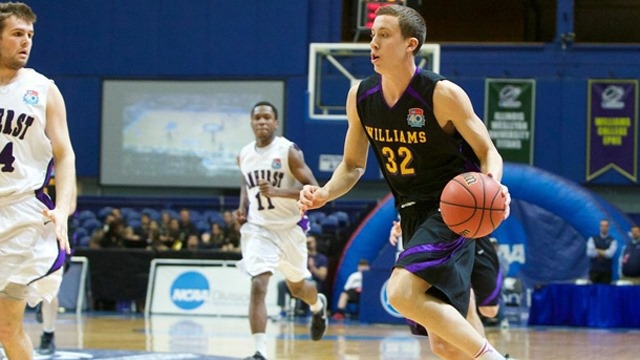 John Beilein kicked the tires throughout the July evaluation period in search of a shooter to add to Michigan’s 2015-16 roster. He might have finally found one  in the most unlikely of places: Williams College. Williams is the top liberal arts college in the United States according to US News and World Reports and has just 2,052 undergraduates.

Duncan Robinson was the NCAA Division III Freshman of the Year and a 4th Team All-American last season. He averaged 17 points and six rebounds per game and led Williams within a buzzer-beater of the Division III National Championship. Thanks to a strange sequence of events, his next college game might be played in front of 13,000 fans, not the 2,681 that watched his final game at Williams.

The dominoes started to fall when Robinson’s coach at Williams, Mike Maker, beat out Beilein’s son, Patrick, for the head coaching job at Marist on June 17th. Maker was Beilein’s assistant at West Virginia from 2005-07 and the two remain close. One of Maker’s first moves after being hired at Marist was to hire CJ Lee, Beilein’s former point guard and staffer. Maker and Beilein’s relationship also led to the discovery of Maker’s former star: Duncan Robinson.

“I really enjoyed Williams and when I found out my coach was leaving,” Robinson said. “I have a great relationship with (Maker), it was sad but at the same time I’m happy for him because he has to do what he has to do for his family. After that I was just kind of looking at my options and I got some positive feedback so I’m just kind of going with it right now.”

Robinson received interest from across the country, but two schools are standing out above the rest: a top liberal arts college and a top public university.

Beilein and Robinson have been in constant contact for the last month, touching base on the phone nearly every other day.

“I’ve just been talking to coach Beilein a lot, just about every other day for probably about a month now,” Robinson said. “So it’s been great to hear from him and kind of build a relationship with him. He’s been great throughout the whole process, also reaching out to my mom because it’s a big decision in my life and she wants to be on board with it. He’s been great (with both of us).”

It should come as no surprise that Robinson’s top skill on the basketball court is one of John Beilein’s favorites: shooting. Robinson shot the lights out at the Division III level and has been known as a shooter throughout his career. He shot 67% from two-point range, 45% from three-point range (67 eFG%) and 88% at the free throw line during his freshman season at Williams.

“I really like to shoot, that’s one thing,” Robinson said. “And I like to take pride in the fact that I’m not just one of those shooters that just kinds of jacks shots. I think I take good shots and I really feel like I work for the best shot and working within a system is when I play my best.”

Robinson has always been able to shoot it, but he’s perhaps the most intriguing element of his game going forward is the fact that he’s still growing.

A redshirt transfer season will provide every opportunity for the versatile wing player to develop both on the court and in the gym.

“I’m excited about (having to sit out a year), one thing I definitely take pride is in that I consider myself a hard worker. I’m really excited for this year,” Robinson said. “Obviously at a school like Michigan you have all the resources in the world so there are no more excuses for me if I do go there.

Transfers up from lower levels of Division I basketball are common, but transfers from Division III to high-major basketball are almost unheard of. Robinson realizes the opportunity in front of him and is prepared to embrace it.

“It’s kind of a dream come true that (Michigan) even reached out to me in the first place,” he said. “It’s an incredible school academically and obviously athletically as well. I’m not too familiar with the (specifics of the) school, I know as much as you can without actually seeing the campus, but I’m so excited to be there and really get a better feel for it and feel if I see myself there.”

If the fit is right, Robinson will have every opportunity to join the Maize and Blue.

“Michigan has another scholarship available,” Robinson said. “Coach Beilein said when I get on campus I’d have the opportunity to accept it if I wanted to.”