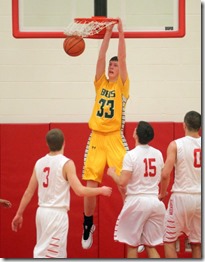 The summer live period ended on Sunday as the final of three July evaluation periods wrapped up across the country. College coaches will spend much of the next month recalibrating their recruiting boards and sending out additional offers and setting up visits. For Michigan, that process even involves a Division III transfer.

Prospects across the country will also retool their lists as they receive more and less interest from certain schools. After a long month of July, it’s clear that Michigan head coach John Beilein has prioritized 2016 big man Jon Teske.

Teske was offered a scholarship on June 15th and has camped at Michigan twice – for College Practice and Team Camp – and the Wolverines had a coach at almost every game he played this summer. Beilein has been sure to check in on him during every period, despite the fact that Teske hasn’t always played in the highest-profile tournaments or events each weekend.

There aren’t many serious big man targets on Michigan’s board and Teske appears to be near the top of Beilein’s list. The attention and scholarship offer from Michigan thus far has stood out to Teske.

“That was really exciting,” Teske said at AAU Nationals when asked about the Michigan offer. “It’s a big time school. I really like the coaches up there and I really enjoy it up there. “

Ohio State has also offered Teske a scholarship and it appears that the Buckeyes and Wolverines are out in front. Dayton and Miami (FL) have also offered scholarships while Indiana, Purdue and Wisconsin have all inquired. Teske plans to schedule some additional visits this fall, but hasn’t set any dates or locations.

USA Basketball announced its final roster of 12 players to travel to the U17 World Championships in Dubai and several Michigan targets made the cut including 2016 offer Tyus Battle and point guard target Devearl Ramsey. Derryck Thornton (injury) and TJ Leaf missed the final cut to 12. Battle discussed the opportunity to play with USA Basketball last week. Henry Ellenson, Caleb Swanigan and VJ King, three other prospects with some Michigan interest, also made the final team.

Derryck Thornton broke his hand during training camp and missed the final cut due to the injury, but had previously impressed according to Hoopniks

As mentioned in Thursday’s camp report, Malik Newman was nearly unguardable, event against the substantial competition present at training camp. On Friday, Thornton did an admirable job in containing Newman, which was impressive. Thornton also showed a high IQ floor game, solid defensive instincts, and a fairly deadly outside shot. The lithe general on the floor has good handles and vision, and delivered the ball where it needed to go. Simply put, Thornton put together a strong offensive-defensive performance on Friday.

Michigan and Kentucky continue to recruit the 2016 guard harder than the rest of the country.

Beilein was spotted watching The Family’s 16U team on Thursday, Saturday and Sunday. Winston has had a very productive summer with The Family while Bowen has emerged as a legitimate top-15 prospect in the class of 2017.

It’s no secret that Seth Towns is a Michigan priority. The Wolverines offered Towns on June 15th and have hosted him nearly ten campus visits.  Towns made it clear on Twitter that he’s still open to hearing from more schools despite his high mutual interest with Michigan.

“I am not committed to The University of Michigan,” Towns tweeted on Friday. “I like them, but I’m also looking forward to more recruitment. People have the wrong idea.”

Towns has offers from Iowa, Virginia Tech, Xavier, Toledo, Rice, Air Force and Dayton. UCLA has also been tracking the 6-foot-8 forward steadily. Future 150 was impressed with his performance in Louisville.

At 6’8”, Towns is a long, athletic wing who possesses one of the purest strokes on the AAU circuit. He can make you pay with even the slightest bit of space. Towns is lethal from beyond the arc, and he also showcased a smooth pull-up jumper. Towns was a big-time performer on Thursday night in front of Xavier head coach Chris Mack, Iowa assistant Kirk Speraw, Michigan assistant Bacari Alexander and others.

Moyer now has offers from Florida, Iowa, Wake Forest, Virginia Tech, Arizona State, Kansas State, Penn State, Northwestern, Vanderbilt and Tennessee. 247Sports moved him all the way up to No. 26 in its latest rankings. Moyer will visit Syracuse on August 6th, per Courtside Films.