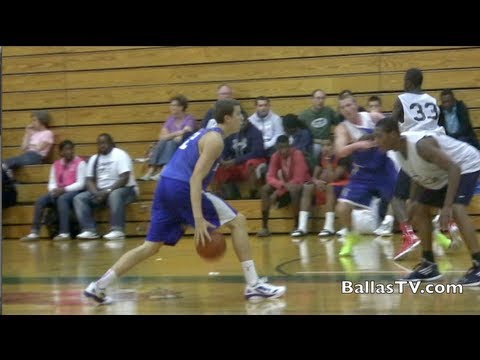 John Beilein might look to a transfer to help fill out his recruiting board. TheWolverine is reporting that Michigan will host 6-foot-7 wing Duncan Robinson for a visit this week.

Robinson averaged 17.1 points and 6.5 rebounds per game while shooting 45.3% from three-point range during his freshman year at Williams College in Williamstown, Mass. Robinson was named D3Hoops.com Rookie of the Year and was selected as a 4th team All-American. Williams lost in the Division III Naitonal Championship by 2 points. Duncan scored a combined 47 points in the D3 Final Four.

Robinson played for Mike Maker, who was hired by Marist this offseason, and who was a former assistant coach for John Beilein.

“We’re never done (recruiting), we’ll look at this last one that we might have and be very judicious with it,” Beilein said in May. “We’ll see where (recruiting) goes, because (the last scholarship) could be coming into ’15 right away, or ’16.”

The New England Recruiting Report raved about Robinson after his final year at Phillips Exeter Academy in New Hampshire.

“A year ago he was a relative unknown coming out of Governor’s Academy. One year, two inches, and 20 pounds of muscle later now he’s a NEPSAC finals MVP and a huge steal for Williams College,” NERR wrote. “While the masses are wondering how a sharp-shooting six-foot-seven forward could have slipped through the scholarship cracks, the reality is that he jumped through, spurning scholarship offers for the top ranked liberal arts school and one of the most storied Division III basketball programs in the country.”

Michigan also has offers outstanding to Jalen Coleman, Eric Davis and Jalen Brunson in the class of 2015. The Wolverines’ projected scholarship breakdown for future classes can be found here.