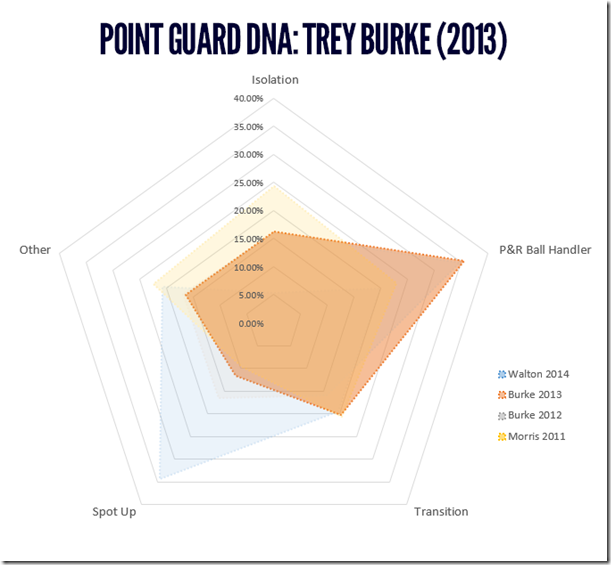 Derrick Walton had the unenviable task of stepping in and replacing the National Player of the Year, Trey Burke, as a true freshman. Walton was Michigan’s starting point guard from day one and handled the task with admirable stability. He did what he was asked, deferred to his more teammates and made critical plays in the clutch. But the truth is, Walton didn’t have to replace Trey Burke – Nik Stauskas, Caris LeVert and Glenn Robinson III did that.

Things will be different as a sophomore. Caris LeVert will carry much of the heavy lifting, but Walton is going to have to step up in the same way that LeVert, Stauskas and Robinson did last season. He’s going to have to develop into the alpha-dog point guard that has carried Michigan for three of the last four seasons. There’s (young) talent around him, but Walton is the No. 2 returning option this season.

To visualize just what could be expected of Walton as a sophomore, we compared his play type makeup – we’ll call it his point guard DNA – to the two point guards that preceded him at Michigan: Trey Burke and Darius Morris. The following radar charts display what percentage of a player’s offensive possessions were: isolation, pick and rolls, transition, spot up or other (putbacks, cuts, shots off screens, etc.). The results illustrate Walton’s complementary role as a freshman and outline his path for growth as a sophomore.

The first thing that becomes immediately obvious when looking at Walton’s graph is that he had significantly more spot up possessions than Trey Burke or Darius Morris. Walton was predominantly a jump shooting outlet in Michigan’s half court offense last season. 34.4% of his offensive possessions were of the spot up variety. That number is comparable to notable shooters under John Beilein, but not to many point guards.

While Walton wasn’t a traditional Michigan point guard last season, there’s plenty of reason to believe he could be. He’s already done a good job in transition and he was very effective when he did run ball screens, grading out in the 83rd percentile. His efficiency was already comparable to some of Michigan’s ball screen talents, his next step is maintaining efficiency with workload. He was also an above average isolation driver (85th percentile) and he had a 3 to 1 assist to turnover ratio in transition.

Darius Morris dominated the ball during his sophomore season. That was partly due to the way that he played the game and partly due to the talent around him. Zack Novak, Stu Douglass, and Tim Hardaway Jr. were primarily just spot up shooters that season, Jordan Morgan was just a finisher and Michigan didn’t have many other options. Morris’ sophomore season is widely regarded as the season where Michigan fell in love with the ball screen, but you can also see that he ran a significant amount of isolation sets as well.

Burke didn’t run as many isolation sets as Morris, but he made up for them with more ball screens. Nearly a third of his offensive sets were pick and roll, but he didn’t get out in transition as much as Walton, Morris or his next season.

Burke stuck to the same recipe in his sophomore season, he just managed to do almost everything more efficiently. Better teammates were a big help – Stauskas, Robinson and McGary were added into the mix – but Burke also simply refined his game. Unlike Nik Stauskas or Caris LeVert – who made massive improvements by diversifying their games as sophomores – Trey simply got better at what he already did best.

Derrick Walton isn’t going to transform into Burke or Morris overnight, but expect his play distribution to skew to the right of the graph (pick and rolls), rather than the left (spot up shooting) as a sophomore. Walton has the ability and now he’s going to have the opportunity.

With Walton, I’ve often pointed to the Yogi Ferrell model. Ferrell was a complementary option during his freshman season, but then exploded as Indiana’s focal point during his sophomore year. His freshman to sophomore charts show a similar progression to what we could expect from Walton as a sophomore (Walton’s freshman year below in blue).

It will require a big leap on the floor, but Walton has already proven that he can handle the ball, shoot the three reliably and make big plays. He didn’t show as many ball screens as many might have hoped, but he was effective when he ran them.