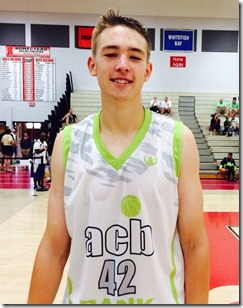 Seth Dugan was one of the fastest rising post players in the class of 2015 this summer, impressing scouts at the NY2LA Invitational in Milwaukee and AAU Nationals in Louisville. Dugan caught Michigan head coach John Beilein’s eye in Louisville and now is set to visit Ann Arbor for a pre-Europe practice.

Dugan averaged 16.1 points and 14.2 rebounds per game as a junior at Ostego, but he’s impressed national scouts with his diversified game. He has the size and length to finish around the basket, but more recently the 7-footer has added the jump shot to his arsenal.

“I can finish around the basket with both hands, hook shots with my right or left hand, I can step out to 15-foot and am working on the three-ball,” Dugan said. “I run the four I think pretty well and I change shots an block some shots on the defensive end.”

Dugan is up to 16 offers with the most recent coming from Rhode Island, Xavier and Davidson. He’s already planning to take an official visit to Northern Illinois, but Big Ten schools like Michigan, Wisconsin, Iowa, Purdue and Michigan State tracked him throughout July. Beilein was in contact with the 7-footer this week to discuss where he stands on Michigan’s radar.

“I talked to Coach Beilein yesterday and I’ve talked to him a few times on the phone now,” Dugan said.

“We just talked about how he came to Louisville and watched me a little bit and he gave me some feedback about that and then he wants to come up here in the next few weeks and then wants to get to know me a little better and watch me in September a little bit.”

Dugan will start to get to know Michigan a little better when he makes the trip to Ann Arbor to take in a practice before Michigan’s trip to Europe.

“Yeah, I’m going to go up for practice I think around August 15th or something in there,” Dugan said. “And then they want to come down and see me in September at my high school.”

Michigan’s big man recruiting is particularly tenuous because no players over 6-foot-6 that will be on the roster in 2015-16 have ever played a college game. Beilein will be getting one of his first chances to figure out what he has to work with in the front court during Michigan’s practices and trip to Europe this August.

Even if the Wolverines look to add Dugan to the class, a redshirt could still be possible as the 7-footer looks to add weight and develop his game.

“(Coach Beilein) said that if he offers me,” Dugan said. “He probably wants me to come in and redshirt and then work on my body and get my strength up a little bit and then come in and play after that.”

Dugan was on campus for Michigan’s College Practice Camp in June, but he hasn’t been on campus for an sort of unofficial visit. He still thinks highly of the Wolverines and is familiar with the growth of the program.

“It’s a great school and they’ve had a lot of success here in the past few years,” he said. “They’re a great academic school as well and one of the best in the country so it’s a great school.”

Dugan only has one of five official visits set in stone – a trip to Northern Illinois, who he said is recruiting him the hardest, on August 28th – he’ll look to start coming up with a list in the coming weeks. He hopes to make his college decision before the start of his senior season.

“I’m going to wait a little longer (to put together a list) because there might be a few more offers coming in here and there,” he said. “But I’d like to in the next few weeks.”