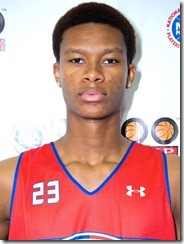 Class of 2015 guard PJ Dozier has Michigan in his top five and will take an official visit to Ann Arbor.

Dozier is ranked 31st nationally according to the 247Sports Crystal Ball and had a very productive summer after returning to action from injury. He will also visit Louisville, Georgetown, South Carolina and North Carolina.

Dozier has been on Michigan’s radar for over a year and Michigan head coach John Beilein watched him during July. The South Carolina native has yet to visit Ann Arbor, but he’s expected to be offered a scholarship on campus. Dozier confirmed his top five on Twitter.

The 6-foot-5 guard is known for his versatility and playmaking ability from both guard spots.

“A tall and skilled guard, Dozier looks to be pretty close to 100 percent with the rehab of his surgically repaired knee,” Rivals wrote after July. “He found great confidence in July as both a playmaker and scorer. Given the tools and skill he has to go with his size, he is currently under-ranked.”