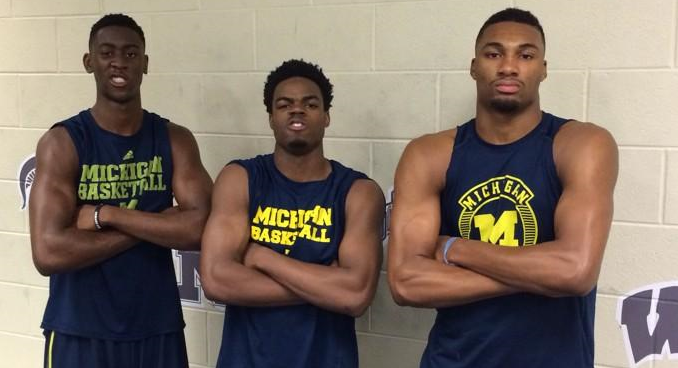 Derrick Walton and Zak Irvin last participated in Adidas Nations two summers ago. That was the August before Walton and Irvin’s senior high school seasons.  Irvin was preparing to move out of Gary Harris’s shadow and into the limelight while Walton was preparing to take a run at Mr. Basketball.

Two years is a long time by any measure, but Walton and Irvin’s growth on the basketball court feels exponential since then. They are older, bigger and stronger, and they are now the veterans of Michigan’s team.

Throughout the weekend at Adidas’ marquee summer camp event, Walton and Irvin are working out with a group of college counselors that includes like Terran Petteway, Frank Kaminsky, Stanley Johnson, Terry Rozier and EC Matthews. Adidas sponsored NBA players like Kyle Lowry and Arron Afflalo also showed up to join the action.

“It’s going pretty well,” Irvin said at Adidas Nations. “I was able to do this when I was back in high school and it’s fun come back and get back and work with other high school kids and compete with college players from around the country.”

Irvin and Walton were both thrown into the mix as freshmen on a very good team. Walton as the starting point guard and Irvin as the ‘designated shooter’ off the bench. Both players’ keyed runs or late-game plays which won the Wolverines critical conference games. Irvin says that he’s much more knowledgeable about the game of basketball than the last time he was in California.

“I know a lot more,” Irvin said. “Just about the game overall from the mental aspect coming back and working on things that I’ve been working on all summer.”

Irvin continued to do what he’s done best for Michigan at the event, knocking down jumpers on the wings. He was able to play on the same team as Derrick Walton and the two reportedly showed great chemistry throughout the event. For Walton, the event is a chance to meet up with old friends who attended the camp a second time around.

“It feels great. Seeing all the guys I was with in high school,” Walton said. “Some of the guys I was actually here as a player with (two years ago). We’re just enjoying the process and am glad to come back.”

While camps like Adidas Nations and the LeBron James Skills Academy are generally considered to be early NBA Draft showcases for college players, Walton has been focused on trying to learn during his time at camp.

“Just be more attentive,” Walton said. “Listen on the fly, pick up a lot of stuff that these guys have to say because you know it’s the right thing. Then just overall shotmaking ability, being in better shape, I’m looking to take that back to Michigan.”

The results are paying off. NBC Sports was impressed with Walton’s ability to lead his team on Friday night.

“On Friday Walton was very good with regards to distributing the basketball, making sound decisions in the pick-and-roll game and getting his teammates the ball where they were best positioned to enjoy success,” NBC Sports’ Raphielle Johnson wrote. “One of the beneficiaries was teammate Zak Irvin, who knocked down multiple jump shots on the tail end of those Walton passes. With an eye towards next season, this weekend will be good for the two Wolverines as they (along with Caris LeVert) are the ones best positioned for a breakout 2014-15.”