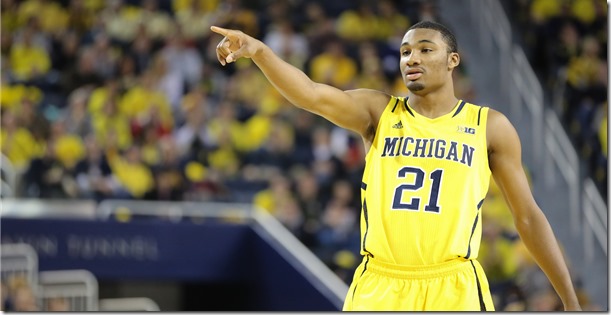 The phrase ‘Camp Sanderson’ has become ubiquitous with offseason improvement in Ann Arbor.

The skill work, drills and testing that originally made John Beilein’s offseason regimen famous are still present, but last year Caris LeVert and Nik Stauskas set a new benchmark. The duo stayed on campus all summer – enrolling in both summer semesters rather than the traditional single session – and dedicated themselves in the weight room with strength coach Jon Sanderson.

“There’s been a major push from guys who want to be here the whole summer,” Beilein said earlier this offseason. “I expect many of our guys will be there. But I don’t have all the numbers. We’re not saying we want people to come back for both summer sessions. We definitely want them for one. It’s going to be completely up to them for that first session. All I know is it really paid off for Caris and Nik. But it was their choice to do that, and that’s what’s important.”

The hard work paid dividends as both Stauskas and LeVert added strength and broke out as sophomore stars. Stauskas added 15 pounds, checking in at 205, and progressed from a complementary shooter to the Big Ten Player of the Year and a top-ten pick. LeVert also added 15 pounds of muscle, up to 185 pounds, and was Michigan’s second best player last season – something no one would have imagined last summer.

But now Stauskas, Robinson and McGary are gone and LeVert has been sidelined most of the summer after foot surgery. The summer baton has been passed to Michigan’s new sophomores, Zak Irvin and Derrick Walton. Both players stayed for Camp Sanderson and have already made strides in their physique.

Irvin’s offseason strength gain – he’s up 15 pounds to 215 — was obvious according to observers at the Adidas Nations camp in Garden Grove, California. Irvin reflected on his physical development after participating in a game with other college stars from across the country.

“I’m definitely getting stronger,” Irvin said at Adidas Nations. “I know that was a big thing (entering this season). That was the big jump I wanted to make between my freshman and my sophomore years and also become more of a complete player. Last year I shot a lot of threes, this year I’m trying to get to the basket.”

Irvin played mostly out of position at the four spot last season and was forced to learn just how difficult the game can be in the frontcourt. Standing at 6-foot-6, he’ll hope to move down the lineup, but should be more prepared to battle this season. Irvin learned exactly how physical basketball can be after his freshman year.

“Playing in the Big Ten, it’s a physical conference and I have to be able to use my body more to finish around the basket,” Irvin said.

Back at Adidas Nations after participating in the event as a high-schooler two years ago, Irvin is trying to turn his added muscle into results. Hoping to demonstrate how he’s diversified his game, Irvin reflected on his improvement.

“I’m trying to be more than just a spot up shooter like I was last year,” he reiterated. “Just get more into ball screens and I’ve definitely worked on my ball handling as well.”

While Irvin’s physical improvements were clear, the results on the court in California didn’t quite match up to the hard work in the weight room. Irvin still struggled to show off his complete game and his improved handle.

“I really wanted to see Irvin do more using dribble penetration,” NBC Sports’ Scott Phillips told UM Hoops. “He was still solid as a catch-and-shoot option — generally receiving looks from camp teammate Walton — and ran a bit hot and cold with his jumper but he was mostly steady in that capacity. But when he put the ball on the floor, Irvin had trouble creating and making his own shots and got stripped a couple of times in traffic. Irvin did do a nice job of moving without the ball and spotting up in prime shooting locations, obviously helped by his familiarity with having his own point guard there. Defensively, Irvin was so-so, as he did a decent job of tracking shooters off of down screens but he rarely made notable impact plays on that end of the floor that resulted in turnovers.”

Zak Irvin will have a prominent role in Michigan’s offense this season, even if he is just a bigger and stronger version of the player that he was last year. John Beilein’s offense needs shooters and cutters as much as it needs creators and both Caris LeVert and Derrick Walton appear poised to serve as Michigan’s creators. But if Irvin is going to take the next step, he’ll have to continue to diversify his game, showing off those dribble pull-ups and straight line drives that he was capable of at the prep level.