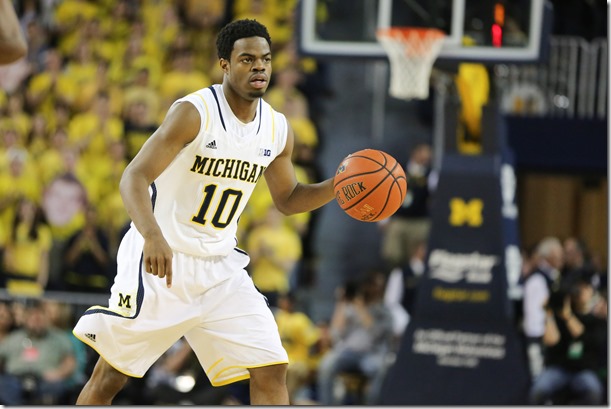 Derrick Walton averaged 26 points and seven assists per game in high school. On the AAU circuit, he led the Michigan Mustangs to a number of high profile AAU championships on the summer circuit. He’s no stranger to being a leader on the floor.

As a point guard, Walton has been the go-to guy on the court for as long as he can remember – until last season. After serving as the offensive focal point for his entire career, Walton was the No. 4 option in Michigan’s offense. The shift was drastic, but Walton handled it flawlessly. He was always ready to make plays when Michigan needed — making gamewinning plays on the road at Nebraska, Michigan State and Ohio State — but he only scratched the surface of his potential.

Back at Adidas Nations for the first time since the summer before his senior year of high school, Walton spoke like a player ready to take the next step.

“Me, Caris and Zak are kind of looked at as the focal point leaders this year, so we kind of think of ourselves as vets now,” Walton said. “Because the guys that left were sophomores as well. So we’re all taking that leadership role piece by piece and bringing the younger guys along.”

Sophomores are rarely expected to be leaders on the floor, but at Michigan that’s become a constant reality. Caris LeVert will provide leadership as an upperclassmen, but Walton has played more minutes than anyone other than LeVert on the roster. It might just be his first offseason, but it’s already time for him to take ownership of the program.

Walton reports that he’s in great shape and is ready to expand his game this season.

“(Staying on campus this summer) improved my body a lot,” Walton said. “It did a lot for my flexibility and my explosiveness. So this upcoming season you’ll see me do a lot of things that I couldn’t do last year.

“Of course you’re going to see me be more aggressive. My pace is going to be a lot better and I’m going to know exactly what I’m looking for out there after having a year under my belt.”

There were times last season that Walton was thinking – not playing. That’s to be expected from a freshman as John Beilein’s offense is known for its flexibility, endless vocabulary and steep learning curve. Eliminating that split second of thinking rather than reacting is often the most critical hurdle in a young player’s development.

The most important way for Walton to ‘just play’ rather than thinking the game through will be to reincorporate an element of his game that’s always been there, but was put on the backburner last season: the ball screen.

“I was working (the ball screen game) my entire career up until college,” Walton said. “(Last year where I didn’t get as many chances because we had Nik and Caris and Glenn so I kind of waited my turn but you’ll see me in (ball screens) a lot this year.”

Walton’s performance in Garden Grove provided plenty of reasons for optimism as he looked every bit like the mature point guard that Michigan will need this season.

“Although Walton struggled to consistently knock down shots, he did play sound overall floor games in each of the outings that I saw at adidas Nations this week,” NBC Sports’ Scott Phillips told UM Hoops. “Walton was an effective point guard — even in a camp setting — and ran a lot of high ball screens with his big men that helped him get in the paint and find shooters or cutters. As a scorer off of ball screens, Walton liked top-of-the-key jumpers off of high ball screens and he finished a couple of shots around the basket in traffic if he didn’t look to pass. Walton also rebounded well on the defensive end from the point and used those rebound opportunities to push tempo and try to get fast-break baskets. Defensively, Walton was sound in most cases and did a solid job recognizing ball screens and trying to fight through them. If he would have shot his perimeter jumper with consistency, he would have had one of the better weeks of the college counselors.”

Michigan has had the country’s best offense for the past two seasons thanks to its proficiency in the ball screen. The Wolverines have been able to make remarkably smooth shifts from Darius Morris to Trey Burke to Nik Stauskas and Walton’s ability to shoulder the load this season will be a key to Michigan’s success in 2014-15.