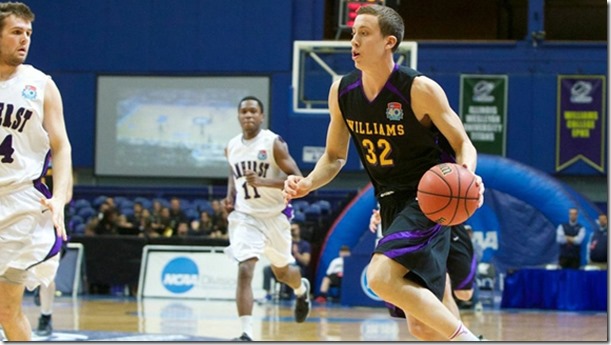 Duncan Robinson is headed to Michigan. The 6-foot-8 wing forward pledged to John Beilein today after his official visit to Michigan.

I am proud to announce that I'll be transferring to the University of Michigan. Proud to be a Wolverine! #GoBlue 〽️

Robinson will begin his rare, almost unheard of, transition from Division III to Division I basketball this fall as he enrolls at Michigan. The sharpshooting wing forward will have to sit out this season due to NCAA transfer regulations, but will have three years of eligibility remaining when he’s eligible in 2015-16.

“It’s kind of a dream come true that (Michigan) even reached out to me in the first place,” Robinson said last week. “It’s an incredible school academically and obviously athletically as well.”

Robinson averaged 17 points and seven rebounds per game last season at Williams, leading the Ephs to the National Championship game where they lost on an eventual buzzer beater. He chose Michigan on his visit to Ann Arbor and also took a visit to Davidson over the weekend.

More on Robinson including rankings, background story, scouting reports and video after the jump.

Robinson’s Division III statistics are impressive, but attempting to adjust them for Division I competition is difficult. He averaged 17.1 points and 6.5 rebounds per game while shooting 45% from three, 67% from two and 88% at the free throw line. In league play he was even more efficient, averaging 19 points per game while shooting 53% from three and a ridiculous 78% inside the arc.

Robinson didn’t have a Division I offer when he committed to Williams College before his fifth year at Phillips Exeter, a Class A NEPSAC prep school. He did have interest from Ivy and Patriot League schools and a Division II offer at Merrimack College. Had he waited to commit until after the season at Exeter, Division I offers might have been threre. Instead, he opted to make an early pledge to Williams, the top liberal arts college in the country..

One year later, Williams has interest and offers from Michigan, Davidson, Marist and a collection of ACC, Big 12, Big Ten, Pac-12, Atlantic 10, Ivy League, Patriot League and American East teams including Creighton.  While Michigan ended up as the best fit for Robinson, the Wolverines weren’t the only school willing to take a chance on his game.

Robinson’s emergence came from a perfect storm of events this summer. His coach at Williams, Mike Maker, was hired by Marist and that gave Robinson reason to look around. Marist lacked the academic chops for Robinson, but Maker (a former Beilein assistant coach at West Virginia) helped Robinson find some suitable landing spots. Michigan was an obvious fit given Maker’s relationship with Beilein and the fact that Williams ran a similar offense.

Maker’s endorsement to Beilein probably sounded something like what he told the media during the Division III tournament.

“I can’t imagine where (Robinson)’s going to be a year from now, or two years from now,” he said in March. “You’re not gonna recognize him.”

Robinson continued to grow during his time at Williams, and reported in a phone conversation last week that he’s now 6-foot-8, and was selected as the National Freshman of the Year and a Fourth Team All-American according to D3Hoops.com. He improved as the season wore on and was critical in leading Williams to the Division III National Championship, where the Ephs fell just short.

“I really like to shoot, that’s one thing,” Robinson told UM Hoops. “And I like to take pride in the fact that I’m not just one of those shooters that just kinds of jacks shots. I think I take good shots and I really feel like I work for the best shot and working within a system is when I play my best.”

Out of high school, New England Recruiting Report was already realizing that people might have missed out on Robinson’s ability.

A year ago he was a relative unknown coming out of Governor’s Academy.  One year, two inches, and 20 pounds of muscle later now he’s a NEPSAC finals MVP and a huge steal for Williams College.  While the masses are wondering how a sharp-shooting six-foot-seven forward could have slipped through the scholarship cracks, the reality is that he jumped through, spurning scholarship offers for the top ranked liberal arts school and one of the most storied Division III basketball programs in the country.

Nothing But NESCAC provided us with the sort of detailed scouting report on Robinson’s freshman year at Williams that you could only get from an outlet that covers the NESCAC relentlessly.

Robinson just submitted the greatest freshman year possibly ever in the NESCAC and definitely the best of the last 15 years. The NESCAC is also considered one of, if not the best Division 3 basketball conference in the country with a team more often than not reaching the Final Four of the NCAAs. Yet Robinson was clearly a great player from the moment he stepped on the floor. The one trait that undoubtedly made him special was his shooting ability. He consistently flashed NBA range and was comfortable in both catch and shoot situations or pulling up off of a pick and roll. On the season he hit 2.5 threes per game at a 45% rate. While he didn’t have the quickest release, Robinson was comfortable shooting with a hand in his face in large part because his size and length enabled him to shoot over many NESCAC defenders. The other offensive parts of his game are not as strong, but he was still incredibly efficient. Robinson did not go the hoop all that much and only shot 2.8 free throws per game. He does not have great explosiveness to leap up or past defenders, but relied on using angles and again his exceptional length to finish in congested areas. Because he wasn’t consistently driving his assist numbers don’t jump out at you.

The defensive and rebounding parts of his game are really where Robinson will need to work on if he wants to be a contributor at Michigan. He currently lacks both the lateral quickness and strength in order to consistently stay in front of quicker shorter defenders who could use their leverage against him. Rebounding he used his size to average 6.5 rebounds per game, but he wasn’t very active on the offensive glass or ever really dominated in the paint. His length (I know I’ve mentioned it a lot, but that’s because it was truly unique at the Division 3 level) enabled him to average more than a steal and block per game. Williams ran a mixture of man and zone throughout the season and Robinson was by no means a defensive stopper. He played well within the scheme, but didn’t change games with his defense.

Projecting him at a Division 1 level is very hard for us to do having only seen him at a Division 3 level. The obvious Michigan comparison is Nik Stauskas considering their similar body types, shooting ability, and even the fact that they played in the same high school league (where incidentally I played against both of them as well). Robinson and Stauskas actually graduated from high school the same year, but because Robinson took a post-graduate year at Phillips Exeter and will have to redshirt next year, he will enter 2015 as only a sophomore while Stauskas will be starting his second year in the NBA.

Has a Division III to Division I transfer happened before?

Not often, especially at this level. But there are two recent examples in Matt Hart and Varun Ram. Matt Hart led Hamilton in scoring before transferring to George Washington as a walk on and Varun Ram left Trinity to walk on at Maryland and earned a scholarship, the 5-9 point guard played in 16 games last season.

His skillset obviously fits at Michigan. He’s played a Beilein-style offense, he can shoot the ball from anywhere on the floor and he filled up the stat sheet last season. But jumping from Division III to Division I is not going to be easy. It took extenuating circumstances for Robinson to end up in Ann Arbor and it might take a similar occurrence for him to emerge as a go-to scorer.

Robinson’s ceiling will depend on his ability to improve his strength and athleticism over the next year. Jon Sanderson’s wizardry has been well documented and will be tested with Robinson’s development. He’s never going to be a high flyer or defensive stopper, but if Robinson can develop into an average Big Ten athlete, he clearly has the skill elements of his game to make an impact.

“I’m excited about (having to sit out a year), one thing I definitely take pride is in that I consider myself a hard worker. I’m really excited for this year,” Robinson said last week. “Obviously at a school like Michigan you have all the resources in the world so there are no more excuses for me if I do go there.”