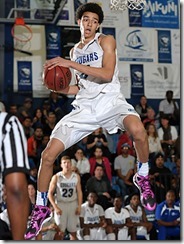 The University of Michigan announced that DJ Wilson will be out 4-6 weeks after undergoing surgery on his finger. The injury will rule him out of game action for Michigan’s Italy Trip, but he will still travel with the team.

“This is an unfortunate injury for D.J.,” said Beilein. “However, we have the best training and medical staff here at U-M, so we know he is in good hands. We anticipate a speedy recovery so D.J. will be back and at 100 percent when we start our September workouts.”