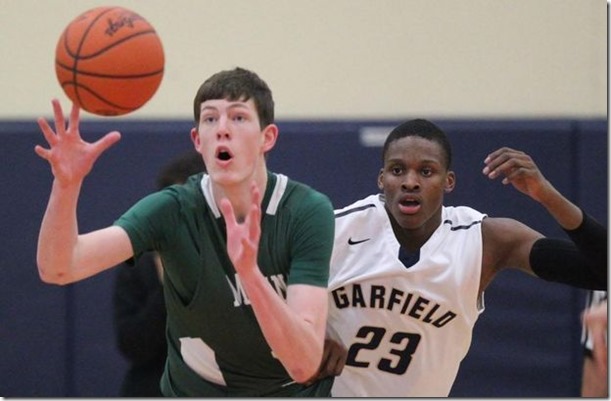 John Beilein knew what big man he wanted to sign in the class of 2016 and his early focus paid off. Michigan tracked Jon Teske religiously throughout the July evaluation period, sending at least one coach to every game the 7-footer played. The gamble paid off as Teske returned the favor with an early commitment.

“Michigan was at every AAU game I played (this summer),” Teske said during a phone interview on Thursday. “So that’s what really stood out to me. With that commitment to me, I just really wanted to commit to them.”

The Wolverines didn’t just prioritize Teske, they proved to be the natural place for him.

“Michigan is just a great fit for me,” the 7-footer explained. “I used to live in Michigan for 10 years and then moved to Ohio when I was in sixth grade. So we still have lots of family and friends still up there and we just had a great relationship with the coaching staff and I’m looking to major in accounting and their business school is one of the top ranked in the nation so that’s what really stood out to me too.”

Teske’s recruitment was already trending upward. Ohio State, Dayton and Miami had offered scholarships and other Big Ten schools like Indiana, Purdue and Wisconsin all showed interest during the summer. With another year of high school and AAU basketball, there certainly would have been additional scholarship offers on the table. Instead, Teske decided to end it early, becoming the first class of 2016 prospect in Ohio to make a commitment.

“I just wanted to get it over with,” Teske said. “Get the pressure off of me so that I can focus on Michigan and also my final two seasons of my high school career and helping my high school team win too.”

RELATED: Scouting, video and analysis of Teske’s commitment to Michigan

Teske had already been to Michigan for a basketball game last season and was on campus for Michigan’s Team and College Practice Camps this summer, but it was his visit last Sunday that set him over the edge.

“Definitely,” Teske responded when asked if the visit sealed the deal. “We were up there Sunday and we took an academic tour that time with my mom, who hadn’t seen it, so my family and I got to see that for the first time and it just really stood out to me and then on the way home my family and I just prayed about it and thought about it for the past couple of days and we just felt like this was the right place for me.”

Although he has roots in Michigan, it’s always difficult for someone living in Ohio to choose Michigan. Teske said the pressure wasn’t too bad, but his dad might need to purchase some new apparel.

“My dad has always been an Ohio State fan,” Teske explained. “But my mom and my dad are both fine with this decision and they are going to support me in any way they can. My dad is still a big Ohio State fan, but he’ll have to switch now.”

Already 7-foot tall entering his junior year of high school, Teske is a natural fit for the five position at Michigan. He moves extremely well, can finish around the basket and also block shots. The Michigan coaches see the raw pieces to be very effective in the high post and saw enough to push for the early commitment.

“They would just use me in the high post with pick-and-pop, pick-and-roll,” Teske said. “They really like my passing ability and then just how I play the game for being a young 7-footer and just me having a pretty good jumpshot from 15-feet and the elbow and my three point shot is coming along. But just working me in the high post and using me right there.”

Teske will add strength and quickness over the next two years, but when he arrives in Ann Arbor he should be ready to make an impact for the Wolverines at the five position.