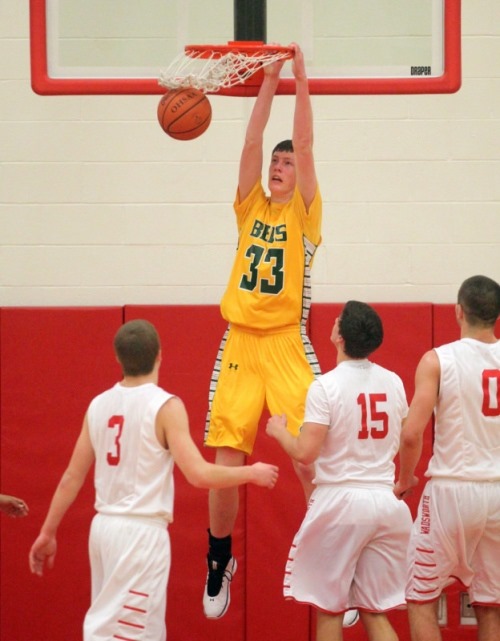 Michigan added its first commitment in the class of 2016 today as 7-foot big man Jon Teske pledged to John Beilein.

Teske chose Michigan over offers from Ohio State, Miami (FL) and Dayton along with interest from Wisconsin, Indiana and Purdue. The big man camped at Michigan twice this summer, attending Michigan’s College Practice Camp and Team Camp, and performed well enough to earn an offer.

John Beilein prioritized Teske throughout the July evaluation period, watching him at least once during all three live evaluation weekends despite Teske playing at smaller profile events. Today, the attention paid off with a commitment.

Officially committed to the University Of Michigan to play basketball!! #GoBlue

More on Teske including rankings, background story, scouting reports and video after the jump.

Teske is rated as a 3-star prospect and held offers from Michigan, Ohio State, Dayton and Miami. Indiana, Purdue and Wisconsin were all showing interest and trying to get him on campus for a visit. He is rated as the No. 1 2016 big man in Ohio according to Triple Double Prospects.

He’s not rated by many scouting services because he missed the majority of the spring circuit with an injury. He’s a prospect that should be expected to make a jump in the next update of rankings after the July evaluation period is factored in.

Teske reports his height and weight at 7-foot and 220 pounds. He averaged 12 points, nine rebounds and five blocks per game as a sophomore for Medina. He’s continue to grow and is pushing for 7-feet, but is still very skinny. He’s best known for his ability to block shots around the basket, but he also has the pieces to put together a fairly diverse offensive game by the time he arrives in Ann Arbor.

He missed most of the April and May AAU period with a broken finger, but was healthy enough to participate in Michigan’s College Practice Camp in early June. He played well at the camp, impressing John Beilein and his staff enough to earn an offer the next week. Ohio State also extended an early offer and the Buckeyes and Wolverines were thought to be the primary schools in contention. Teske continued his solid play on the summer AAU circuit, impressing scouts and drawing additional attention from many Big Ten schools.

With some additional weight, many feel Teske has the potential to be an inside-outside big man that can excel at the next level. His AAU coach, Dave Logan, broke down his game for ElevenWarriors:

“Once he puts on 25 or 30 pounds, that’s when we’ll really going to be able to tell. In two years, we’ll get a better idea of what his ceiling is,” Logan said. “He’s only going to be in 11th grade, and is far from a full-grown man. He’s going to continue to work on the offensive side of things. He’s got good post moves, so he can play inside when he needs to. He’s got a nice jump-hook, nice baseline jump shot and is a good free throw shooter.”

Teske’s potential on the offensive end remains untapped, but he is an impact player on the other end of the court.

“He’ll continue to expand that offensive portion of his game, but right now his biggest strength is defensively, where he can do so many things in the middle of the paint to alter and block shots,” Logan said. “He works really hard on the defensive end to make sure his teammates are taken care of and they trust him, know he’s back there.”

The first thing that stands out about Teske is his legitimate size, he’s a big kid and he moves fairly well. It’s always difficult for a big man to get involved in a camp situation, playing with a random assortment of teammates of various abilities, but Teske showed some signs of why Michigan likes him. He finishes at the rim, rolled hard to the basket, can stick a mid-range jumper and was also a game changer defensively with his length. It’s pretty easy to see how he could be a good fit for Michigan down low.

Earlier this spring, Triple Double Prospects hypothesized that July could be a breakout month for Teske:

Teske is a high profile prospect out of Ohio’s 2016 class, however, due to some injuries his name hasn’t been mentioned on this site very much this spring. That should change in July, however, as a now healthy 6’10 Teske should be back to full force. A very skilled post player with length who could very well reach seven-foot, Teske had an excellent sophomore season at Medina, teaming up with ’15 guard Craig Randall to lead the Bees to some impressive wins. Even through the injuries, Teske has continued to add new schools to his recruiting list, as his AAU coach mentioned calls from Ohio State, Michigan, Purdue, Indiana, Notre Dame, West Virginia and Butler are coming in on the regular. With very few scouts outside of the state knowing who Teske is at this point, this July could be a breakout month for him with Team Work 16u, as he will try and dominate the Adidas Invitational and AAU Nationals.

Michigan has three big men with freshmen eligibility on the roster this season in Mark Donnal, Ricky Doyle and DJ Wilson. Teske will arrive on campus during their junior seasons. That timing should provide an ideal transition period for Teske to add weight and learn the ropes under more experienced frontcourt players. It also starts to provide some class balance in Michigan’s front court after the Wolverines brought in such a large 2014 class.

Teske also has the potential to be Michigan’s best shot blocker in quite a while as he has legitimate size, can move well and has solid length and athleticism. In April, Beilein voiced concerns with Michigan’s lack of shot blocking ability considering the new block-charge rules that were implemented last season.

He’s Michigan’s first class of 2016 commitment and the Wolverines have two scholarships remaining between the 2015 and 2016 classes as things stand today after the addition of Teske and Duncan Robinson.