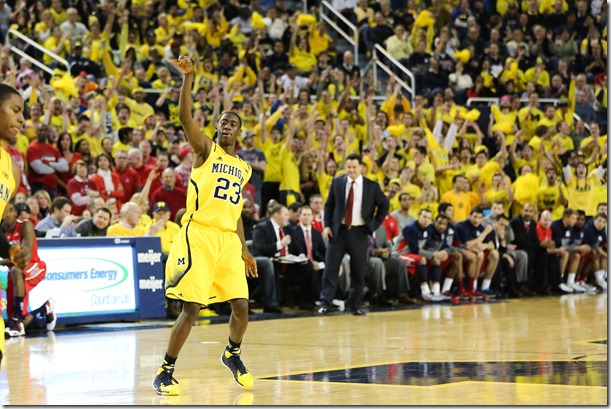 @jamalegbaria: If you had to pick the most NBA ready player at the end of this year from our team, who is it?

Caris LeVert. He’s the most proven, he’ll have more opportunity and he’s already projected as a first round draft pick. I think Chad Ford’s latest mock draft hit the nail on the head, slotting LeVert at No. 27:

LeVert was a revelation last year and scouts are still trying to get their arms around him as a prospect. If he can continue the improvement as a junior and shoot the ball as well as he did last year, he could end up going much higher than this. For the Celtics, another shooter could never hurt.

LeVert’s sophomore season was better than most realized at the time and it lost some of the shine because Nik Stauskas was playing next to him. If LeVert is able to repeat his performance from a year ago, it wouldn’t be surprising if he’s representing Michigan in the lottery once again next season.

@JStew14: Do you see Chatman locked in at the 4? Seems like him and Wilson only options there if Donnal being considered a pure 5?

I do think that Kameron Chatman will play predominantly at the four this season and right now I’d expect that he’s the starter there. Wilson is a guy that can probably play the four or the five, but might be kind of stuck in the middle this year. He’s not quite big enough to be a five and his ball skills aren’t quite good enough to be a regular four man in Michigan’s offense.

The other options are Aubrey Dawkins and Zak Irvin. Dawkins has a similar skillset to Glenn Robinson III while Irvin played the position in spots last year. Irvin will play major minutes, but it makes more sense to slide him to the three spot, especially if Dawkins proves a viable option at the four.

@dsobes: Walton over / under 7 assists per game?

Under. Look for Walton to make a big jump in his distribution, but also his scoring. Trey Burke didn’t even average over 7 assists per game during his sophomore season (he was at 6.7) and he was the best player in the country. Walton averaged three per game last year, I would set the over/under on assists per game at 5 for this year.

‏@dsobes: Donnal gets 2 quick fouls in a big game. First big off the bench?

Ricky Doyle – in fact this could even be the other way around with Doyle starting in front of Donnal. Donnal and Doyle will have everyone’s attention in Italy and their ability to provide quality minutes at the five could determine Michigan’s fate.

@CarlBleich: How much does DJ Wilson being injured and missing Europe hurt his development/chances to contribute? Could he redshirt now?

It definitely hurts, but it’s not a deal breaker. Wilson has already added 20 pounds since he arrived on campus and he has a very unique skill set for Michigan’s roster. With so much uncertainty in the front court it seems likely that Wilson could still be needed this season even if he starts slowly due to the injury.

wolverheel: With the expected advancement of Zak Irvin as a better all-around scorer and a starter, who do you see fulfilling that 6th man “microwave” role that he provided so well?

There are a few viable candidates, but I’m not sure if there’s anyone that’s wired to shoot quite like Zak Irvin. I’ll go with Muhammad Ali Abdur-Rahkman, but he’ll fill the role slightly differently. He’s a player that’s wired to create with the basketball in his hands. I don’t think you put him on the floor unless you are going to let him play his game – which is attack the basket and make things happen.

ajerome33: There has been quite a lot of talk recently about shortening the length of the shot clock in college basketball. How do you see that impacting Michigan’s offensive approach, ability to control tempo, etc. If changes are made to the shot clock, what kind of adjustments do you think the coaching staff will need to implement to still maintain high offensive efficiency?

We’ll get a taste in Europe, where I believe Michigan will play with FIBA rules (24 second shot clock) as it did when it went to Belgium four years ago. I remember that (and competition and inexperience) causing Michigan consternation in Belgium, but at this point I think Michigan would be just fine. John Beilein has proven himself as an offensive guru (the best offense in the country in back to back years) and he wouldn’t have much problem turning up the pace a bit.

‏@hooverstreet: What do you see as the most interesting / compelling non conference game on the slate this season?

Michigan could have two NCAA tournament rematches from its 2013 Final Four run with games against Syracuse and potentially VCU. A game against Villanova, a 2 seed last year, would be a lot of fun as it would pit two perimeter-oriented guard offenses against each other.

But I think the answer has to be the road trip to Arizona. While Villanova, VCU and Syracuse are all good, Arizona is a truly elite program. The Wildcats stole a game in Ann Arbor last season and it will be interesting to see if Michigan can return the favor this year. It should also be a cool opportunity for a lot of Michigan’s freshmen from the West coast to play closer to home.

@SeanChurchy: What have you seen from Irvin that makes you think he’ll make the token “soph. jump”? Just didnt show flashes like Stauskas did IMO

I’m not so sure that Irvin will make a dramatic jump like Nik Stauskas or Caris LeVert – but I don’t think he has to either. Reports from Adidas Nations were that Irvin has improved physically, but is still mostly just a shooter. A stronger and more athletic version of last year’s Zak Irvin playing starter’s minutes with more experience isn’t a bad thing. Something like Nik Stauskas’s freshman year on the wing seems like a reasonable expectation if LeVert and Walton are able to take over creator duties.

@ZGrubes: Which B1G team on the schedule will be a sleeper nuisance for M and which will be an over-inflated team that M should handle well? Also, are we sold on Wisconsin as the team to beat in the B10 this year?

Most people consider the Big Ten to be Wisconsin and everyone else. I’m not ready to say that Wisconsin is over-inflated because Bo Ryan is always tough to beat, even when everyone thinks his team is going to struggle before the season starts. I’m not sold on Frank Kaminsky as a National Player of the Year, but I think the Badgers are legit. Traevon Jackson is really underrated as a point guard and I suspect he’ll have a big year.

Nebraska probably isn’t a sleeper team, but I’m buying the hype despite their pedestrian efficiency margin, easy Big Ten schedule and early NCAA tournament exit last season. I think the core of Terran Petteway, Shavon Shields and Walter Pitchford can really do damage. The good news? Michigan doesn’t have to play at Nebraska where Tim Miles has built up a really impressive home court advantage.

It’s tough to cherry pick an over-inflated team because there aren’t many Big Ten teams that are inflated. Iowa is a team that returns almost everyone other than Roy Devyn Marble, but the Hawkeyes really struggled down the stretch last season. I think Fran McCaffery’s team could struggle to break the .500 mark in Big Ten play once again in Iowa City.