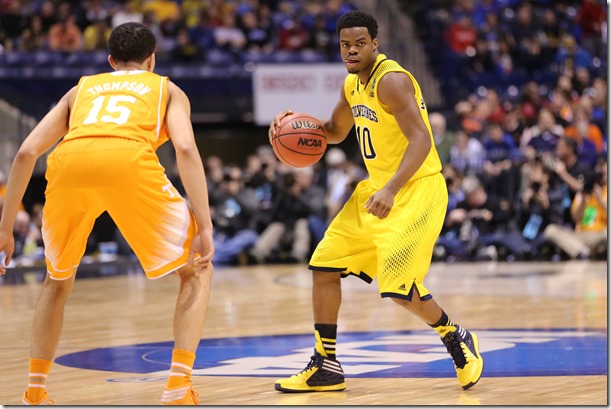 Michigan has had some great senior leaders in recent years, but it has also found itself relying on its youth to carry the team. The Wolverines could be looking to their younger ranks for leadership once again this season as Max Bielfeldt is the only senior on the roster.

“As far as vocal leadership, it has to fall on the oldest players and Spike and Caris and Max have to be a big part of that,” John Beilein said on Wednesday.  “Those guys know almost nothing but Elite Eight and Final Four appearances, but they know the intangibles it took to get to that point.”

The Wolverines know success, but they don’t have a lot of natural vocal leaders. LeVert is generally fairly reserved, Bielfeldt is still sitting out with an injury while Spike Albrecht comes off the bench. Players like Derrick Walton and Zak Irvin will have to take on leadership roles similar to how Nik Stauskas and Glenn Robinson III did last year.

“It’s the same speech I gave Nik last year,” Beilein said. “With Nik, Mitch, Glenn, Jon, Jordan all gone there are a lot more minutes and a lot more shots out there and there’s a lot more defense to be played. It’s all right there in front of them.”

We can all agree that Michigan has a point guard, off guard, and a center, but let’s throw out the traditional position names on the wings. There’s no three or four position, there’s no small forward or power forward. John Beilein now refers to his two wings as the left side wing and the right side wing positions.

The left wing is where Nik Stauskas played last season and Tim Hardaway Jr. played before him. Generally the left-sided wing is going to catch the ball and attack going to his right in the middle of the floor. This has generally been the primary attacking wing role in Michigan’s offense because most players are right-handed.

The right side wing is the position that Glenn Robinson III occupied last season and is perfectly suited for a left-handed player as they attack toward the middle of the floor to their left.

Michigan’s wing options right now are Zak Irvin, Kameron Chatman and Aubrey Dawkins and Beilein says they are already filling into their roles.

“Zak has been playing both sides of the floor, Kam has been playing one side of the floor,” Beilein said. “I like what we’ve seen from Aubrey Dawkins; he shoots the ball well and he’s athletic. There are some things like Hardaway and like Glenn in his game, but there’s a lot of refinement to do. He will play a lot over there (Italy); probably the left side more, where Nik (Stauskas) and Tim (Hardaway) have played before. It’s natural, with Kam being a lefty, for him to play on the right side.”

Irvin appears to have added significant weight and athleticism this season — he added 5 inches to his vertical leap — which could leave him better suited to slide to the right side in relief of Chatman. Dawkins has the athleticism, but it appears that the Michigan staff will focus on ramping him up on the left side of the floor.

3. Freshmen guards and wings can play

With seven freshmen on the roster, Michigan would be in trouble if its freshmen couldn’t play, but there are already some pleasant surprises among the incomers.

Aubrey Dawkins is probably the best athlete on the team. The alley-oop that he caught with his head near the rim was the highlight, but he had several other impressive finishes including a layup in traffic that required him to shift his body in mid-air. On one botched fast break attempt, John Beilein had to ask one of his guards why he didn’t throw the alley-oop to Dawkins, who he called the ‘best athlete in the gym.’ Athleticism finds ways to impact games and Dawkins’ bounce will be a nice boost after losing Glenn Robinson III.

Kameron Chatman fits in perfectly and makes plays whether it’s the right cut or the right pass, but what impressed me was how well he shot the ball on Wednesday. His shooting stroke looks much improved and that could be critical as he spaces the floor from the right corner.

“I’ve definitely (learned a lot about basketball), even on my shot. Coach told me about the split-step and I’ve been shooting way better than I was in high school,” Chatman said after practice. “So just from that the shooting in the first three weeks, my shot has gotten much better.”

Muhammad Ali Abdur-Rahkman looks suited to be an additional ball-handler with size off the bench. He looks like a natural fit to be Caris LeVert’s backup, and the only thing that will hold him back is his consistency with his jump shot.

The freshmen have talent, but they are still freshmen. There were a number of freshmen moments on the floor during a two hour practice session on Wednesday. Things like passes off of feet, giveaways when trying to split ball screens and incorrect cuts are commonplace in August, but it will take some time to iron out all of the kinks.

The good news is that most year’s they aren’t even being addressed until a couple weeks into practice. Michigan has a head start this year and, judging by the amount of learning that took place during one two hour summer practice, this team will be just fine by the time November rolls around.

Michigan’s big men are battling, but it might just be an appetizer for the battles they’ll face in conference play. Mark Donnal and Ricky Doyle are Michigan’s only options at the five position next week in Italy and they will both grow up a lot against live competition.

Donnal is probably the better shooter right now, but Doyle seems more comfortable playing down low with his back to the basket. Donnal did knock down a nice long jumper in five-on-five play, but at times he still feels a bit tentative in his movements.

Doyle has trimmed his body fat from 18% to around 12% this summer and he looked active and physical. Michigan assistant coach Bacari Alexander loves his passing ability on the low block, something he hasn’t had during his time at Michigan.