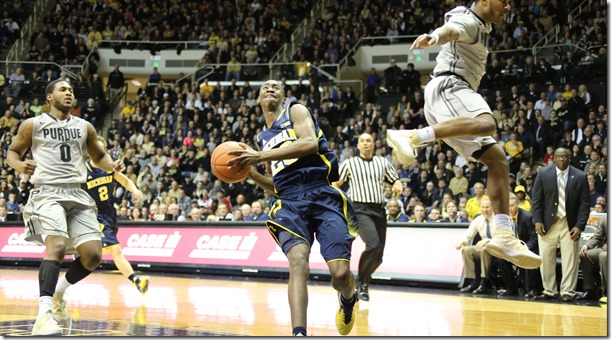 Michigan heads to Italy on Friday to play four games in ten days against an assortment of Italian club and All-Star teams. The Wolverines won’t only be at an experience disadvantage overseas, they’ll also be shorthanded when they make the trip overseas.

DJ Wilson and Max Bielfeldt will both make the trip to Italy, but won’t play in games as they recover from injuries. Bielfeldt is still sidelined from hip surgery this spring while Wilson is out 4-6 weeks with a broken pinky.

“The (injury) we probably planned on the least was D.J. Wilson. Right from the beginning, his injury to his right pinkie kept him from doing almost everything,” Beilein said when speaking to the media on Wednesday morning. “We’ve found that he can shuffle really well without anyone guarding him. That’s been difficult because we were trying to experiment with him at a couple of positions but we never could do it.

Bielfeldt’s hip surgery was originally supposed to keep him out for ‘most of the summer’, but there was an expectation he’d be ready to play in Italy. He participated in some drills during practice on Wednesday, but was a spectator in most live action.

“We were very hopeful that Max Bielfeldt could play when he’s over there (Italy), but he’s not going to be able to play,” Beilein said. “He’s still not moving in the way we want him to move. Austin Hatch is continuing to do rehab; he’s in some drills and he probably will play in some games over there, but he’s not as ready as we hope he will be later on.”

The injuries to Wilson and Bielfeldt leave Michigan with just two scholarship players over 6-foot-8, Ricky Doyle and Mark Donnal, neither of whom have ever played a collegiate game. The experience for Doyle and Donnal will be invaluable, but the injuries will also prevent Michigan from getting a sense of the rest of its pieces in the frontcourt.

LeVert back in action, played through injury in March

Caris LeVert was sidelined for almost the entire off-season after undergoing foot surgery, but he’s finally back on the floor.

“Caris started playing last week, but he’s not himself yet,” Beilein said. “As you can imagine, he was pretty much dormant for 16 weeks and so you’ll see some of those flashes today. It’s just a matter of him getting back in game shape.”

LeVert didn’t look completely himself during practice on Wednesday, but that’s to be expected given the amount of time that he’s been sidelined. He admitted that he’s still trying to find his conditioning and rhythm.

“I’ve been kind of shaking off the rust a little bit,” LeVert said. “But I’ve been trying to get into good shape right now so that’s where I’m at.  I started practicing last week so I should be back, I mean I’m back now, but I’m ready (for Italy).”

Beilein agreed with the assessment of LeVert’s recovery, but wasn’t worried about it long term.

“He just needs repetition right now. He was not able to do a lot of work during that time, so he needs to just get his legs back to an endurance area where he can go longer,” Beilein said. “We’re going to need a lot of minutes from him. Right now he needs to rep out shooting, shooting, scoring, shooting, defending, etc. All he needs is time right now, but this certainly helps. As you watch him out there right now, he’s trying to find his spots and he’s done very well in some practices, while at other times you can see the layoff.”

LeVert mentioned that the injury bothered him at the end of last season and that it definitely affected him in the NCAA tournament. LeVert averaged just 9.2 points per game over Michigan’s final five games last season after averaging 16.6 points per game over the previous nine and failing to reach double figures just once in Big Ten play after the calendar rolled into February.

“I’m not exactly sure (when the injury happened),” he explained. “But sometime during the NCAA tournament.

“I started feeling it (during the tournament), but I waited until after the season to check on it. The doctors think it was more of a wear and tear over time thing. We got the x-ray and it was a fracture.”

John Beilein wasn’t able to discuss recently signed transfer wing Duncan Robinson, but he did hint at his recruiting philosophy. Specifically, Beilein mentioned that he’s seen the need to utilize all of his scholarships on the roster due to the possibility of losing players to the NBA.

“In today’s age of transfers and guys going pro, you have to look at it differently,” Beilein said of the scholarship situation. “There was a time in my career where I would have 10 or 11 guys, then save a couple (of scholarships). Then you’d be down if guys were going pro, so we’re trying to use all our scholarships when we think it makes sense, so we’re looking forward to getting back in September and rolling with this team, continuing to recruit to our needs and the people who fit the Michigan program.”

Robinson filled Michigan’s final scholarship for the upcoming season although he’ll be ineligible due to NCAA transfer rules. The Wolverines currently have one scholarship remaining for the class of 2015 and PJ Dozier appears to be the primary target for that spot. Dozier will take an official visit to Michigan on September 26th. Michigan is reportedly no longer recruiting Jalen Coleman after signing Robinson.