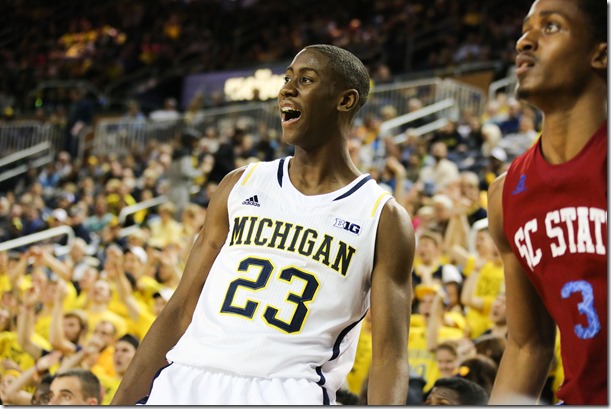 John Beilein couldn’t help but laugh when he was asked if he had any questions that he hoped to answer when Michigan heads to Italy for a ten day trip.

“I have a lot of questions and they’ll be answered over time,” he said with a grin.

Beilein’s roster is littered with questions, not because of a lack of talent or anything else, but because he’s barely had a chance to see so many of his players play. The Wolverines had ten practices in August, but a chance to travel to Italy and play four games will provide an invaluable experience for his team to grow up. Here are four questions that the Wolverines will hope to answer as they leave for Italy today.

The first stat I’ll look for on any box scores that make their way state side will be the rebound column. Is Michigan winning the rebounding battle – mainly on defense – and who is grabbing the rebounds? The U-M frontcourt doesn’t have much of any experience and is the first question on John Beilein’s mind.

“We have three or possibly four young men who’ll be playing in the post that have had very limited post opportunities, or post touches. How much can we throw it in to them? How much can we play off of them? We’re still working in all those areas,” Beilein admitted. “Our post defense — Jordan Morgan was so good at that — and now we have to replace all that, so that’s one of the bigger areas. We are experienced in areas all around the perimeter; we have no experience, except for Max a little bit, but no genuine game experience in any type of big man position.”

How many shots does Zak Irvin attempt?

Zak Irvin is the definition of shot ready. He can get shots up in a hurry and with increased playing time this season his field goal attempt numbers could be through the roof. Irvin shot 43% from three-point range in Big Ten games season and on a per-40 minute basis that equated to 4.2 makes and 9.8 attempts.

“I don’t know if Zak can shoot it any better than he did; he made a three for every nine minutes that he played last year (in league play),” Beilein said. “So we expect similar type of shot selection from him. He’s shooting the ball really well right now as well.”

At his core, Irvin will always be a shooter and a shot maker — we’ve detailed just how precise his role was last season – but he’s also made strides to round out his game. He added 15 pounds of muscle and five inches to his vertical and appears ready to handle both wing positions in Michigan’s offense.

“Zak is taking the ball to the basket better, he’s rebounding more — he did not rebound last year, and he’s becoming a defensive stopper,” Beilein said. “He has some ability to do that. I don’t think he’s proven that in games yet, but most freshmen don’t.”

It’s no secret that Michigan hasn’t been a great defensive team lately. The Wolverines have just been so good offensively that it hasn’t mattered.

Defensive improvement isn’t generally associated with getting younger, but the Wolverines probably aren’t going to have the luxury of having the best offense in the country and the best player in the Big Ten for the third year in a row. Michigan will be looking for stoppers on the defensive end and while Walton and Caris LeVert are obvious candidates, Muhammad Ali Abdur-Rahkman and Zak Irvin could be as well.

Which freshmen stand out?

With so many freshmen on the roster, it’s still difficult to guess where everyone fits. Kameron Chatman, Aubrey Dawkins and Muhammad Ali Abdur-Rahkman will all play in Italy, but keep a close eye on who plays the most minutes and who is the most effective.

Beilein will likely tinker with his lineup quite a bit, but he knows what he’s going to get from players like Derrick Walton and Caris LeVert, who both played major roles last season. He’ll be keeping a close eye on which freshmen he can count on when the season starts up this fall.

At the very least, four games and ten practices will give John Beilein plenty of film to review this fall.