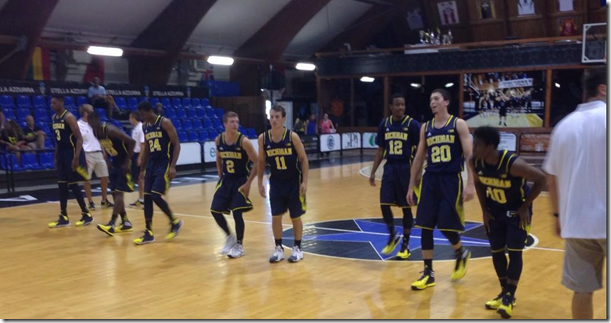 Michigan opened its Italian tour in style with a 99-60 victory over the Perugia Select All-Stars in Rome on Sunday.

The Wolverines jumped out to a 13-3 lead and never looked back, extending their lead to 26 points by the end of the first quarter and 36 points at the half.

“Offensively, that first quarter was not what I was expecting. With us playing so well offensively that led to us playing so well defensively,” John Beilein said after the win. “You don’t know what to expect in games like these. The first quarter was probably a little above what I thought we would do. The last three quarters were a little more predictable for a team on a trip like we are on.”

Derrick Walton, Caris LeVert, Zak Irvin, Kameron Chatman and Mark Donnal got the start for the Wolverines. Muhammad Ali Abdur-Rahkman and Ricky Doyle were the first two players off the bench, according to Michigan Basketball’s twitter account, while Aubrey Dawkins checked into the game shortly after.

“I really shot the ball well today; however, I have to give my teammates credit because they were looking for me and getting me the ball,” Irvin said after the win. “The big thing for me was getting to the hole and I was able to do that. I was able to score inside and outside. It was a great start for us, a great game and hopefully we can keep this going.”

The Wolverines were able to go deep in their bench in the first half as Sean Lonergan and Andrew Dakich both checked in before halftime. Michigan went to the locker room with a 64-28 lead at the half which allowed Beilein to experiment in the second half.

Austin Hatch also saw action in the second half, checking into the game for the first time in a Michigan uniform. Hatch is still recovering from injuries sustained in a tragic plane crash in 2011. He called it a dream come true to play for Michigan when speaking with the media on Wednesday.

“As you can imagine it has been a heck of a journey to get here,” Hatch said after the game. “Playing basketball at the University of Michigan has been my goal since I was a little kid. It was unreal to be here and to have actually played a game. I really feel like I have that game under my belt now and I really feel like a Michigan basketball player.”

Austin Hatch checks in for the first time (via @umichball)

Hatch led the Wolverines in ‘The Victors’ after the win.

“It was unreal,” Hatch said about leading the team in The Victors. “To lead the team in the fight song after the game is a big tradition. I learned that early on in the recruiting process and watched U-M sing it a lot on my visits. I always thought to myself, ‘I hope someday I am in position to be able to do that.’ Just like everything else that happened today, it was just unreal to be able to do that.”

The Perugia Select All-Stars team was sponsored by Basket Academy and was comprised primarily of professional players in the fourth and fifth divisions of Italian basketball.

The Wolverines will be in action next on Tuesday when they face the Vicenza All-Stars in Vicenza, Italy at 2:30 p.m. (eastern).

“We will have 48 hours before our next game,” Beilein said. “This film will be invaluable. There will be plenty of it that will coach the coaches on what we have to teach better. The second part is we will have a chance to sit down with players on the train tomorrow when we go to Verona. It will be just a great teaching tool.”

Find more notes and facts about Michigan’s Italian tour in our Italy 2014 Primer, including a breakdown of the competition that the Wolverines will face overseas.