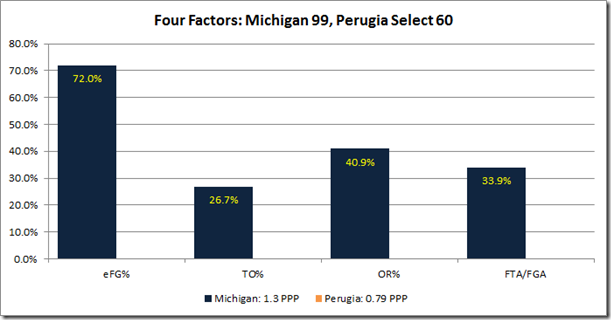 Michigan beat the Perugia Select All-Stars in a blowout win on Sunday in Rome. A full box score was not available, but Michigan’s media relations team put together a box score with stats for Michigan players.

Since the game wasn’t streamed and we don’t have a lot more to work with, here are some statistical observations and notes from the box score including our traditional Four Factors graph.

The game was made up of four 10 minute quarters and played by FIBA rules with a 24 second shot clock. The result was a 76 possession game that saw Michigan score 99 points – 1.30 points per possession — and Perugia manage just 60 points (.79 points per trip).

Michigan shot the ball extremely well – 68% on twos and 52.4% on threes for a 72 eFG% – with 36% of its field goal attempts coming from beyond the arc. Michigan’s shooting was especially impressive as the FIBA three-point line is 22.1 feet, over a foot longer than the NCAA’s 20 feet, nine inch line.

John Beilein was surprised at how effective Michigan’s offense was early on in the first quarter (39 points in 10 minutes) and Michigan’s offensive statistics for the game were very impressive, but they are also likely a sign that the competition level wasn’t quite good enough to give the Wolverines a real challenge. Michigan subbed walk-ons into the game as early as the second quarter and had plenty of time to tinker with lineups.

RELATED: Quotes, photos and clips from Michigan’s win over Perugia

The Wolverines managed to rebound nine of 22 missed shots (41% offensive rebounding rate) and were led by Mark Donnal, who grabbed three offensive boards. Michigan gave the ball away on 27% of its offensive possessions and five different Wolverines had at least two turnovers. Caris LeVert, Muhammad Ali Abdur-Rahkman and Kameron Chatman had three giveaways a piece.

It’s impossible to thoroughly judge defense without an opponent box score, but Michigan recorded 14 steals in 76 possessions which means that the Wolverines stole the ball on 18% of Perugia’s possessions.