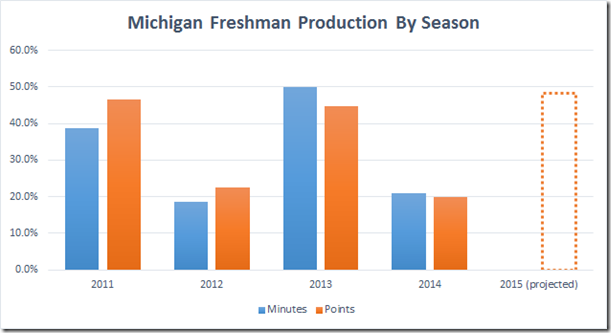 Freshmen scored 48 of Michigan’s 99 points in its exhibition opening win over the Perugia All-Stars in Rome, Italy on Sunday. The game was never close, but the freshmen contributions served as a reminder of just how necessary first-year players will be to Michigan’s success this season.

Michigan’s starting front court was made up of freshman forward Kameron Chatman and redshirt freshman big man Mark Donnal. The first players off the bench were also freshmen, Muhammad Ali Abdur-Rahkman and Ricky Doyle, and yet another freshmen, Aubrey Dawkins, wasn’t far behind.

Michigan’s seven freshmen won’t be the main attraction this year – that label is saved for Caris LeVert, Zak Irvin and Derrick Walton – but they will be responsible for just about everything else. The Wolverines stand to be as dependent on freshmen as they’ve been in any of their last four seasons — and that’s saying a lot given that Michigan has only ranked better than 300th in experience once since 2011.

Michigan’s freshmen might not score 48% of its points in every game — this was a blowout exhibition after all —  but they are obviously going to play a significant role and  Michigan’s only option is to get them ready as fast as possible. Sunday’s exhibition win was the first step, but there’s plenty more ahead. Michigan still has three more games overseas with practices in between.

Youth has become a new normal for John Beilein in Ann Arbor and the trip to Italy comes at the perfect time.

“We made this trip four years ago and I would imagine if we did a poll, we would have been picked to finish 11th out of 11 teams the last time we did this trip,”John Beilein explained last week. “We came back, after getting it handed to us a little bit, a better team and that team went on to make the NCAA tournament.

“I don’t know where this team measures to that team. There are some similarities, with how many young kids are playing. On and off the court, there are so many things going on that are important to us.”

Watching two hours of Beilein’s practice on Wednesday made one thing clear: Michigan’s incoming freshmen have learned more vocabulary during ten summer practices than they did in summer school.

Every switch, cut, rotation and ball screen has a unique term and this is just the offseason. Considering this was just one limited session of an ‘extra’ offseason practice, learning the ‘plays’ takes on a different meaning. Nik Stauskas joked this summer that learning a NBA offense would be no problem after what he went through in college.

“If you know coach Beilein at Michigan there’s no one that has more offense or terminology than him,” Stauskas said.

Beilein is throwing his freshmen head first into the mix and seeing how they come back on the other side.

“What we’re trying to do right now is just throw things at them,” Beilein said. “We talked about switching patterns and some different double-teams that we might be forced into doing because of their age. We’re throwing the whole game at them, so when we come back in September they’ll have a whole different understanding.”

Several freshmen have already stood out.

Kameron Chatman is the highest rated incoming prospect, ranked 27th nationally by 247Sports Composite, and he looked the part of contributor during practice in Ann Arbor.

“His basketball IQ has been outstanding,” Beilein explained. “He’s picked up some of our concepts and some of our actions as quick as anybody we’ve ever had. He’s been very productive as far as his talk and his knowledge of the game. We’re still trying to find out the sweet spots of his game and (teach him) when it’s time to make a play and be a player.”

Chatman’s strong play in practice led to him getting the start on Sunday. He scored 12 points, grabbed three rebounds and three assists in an efficient outing. It would be a surprise to see him knocked him out of the starting lineup any time soon.

Freshman big man Ricky Doyle might have to make the most dramatic transition. Doyle will go from being one of the biggest players in his high school league to trying to fight experienced post players in the Big Ten. He says the toughest transition has been the speed of the college game.

“College is played at a really fast pace,” Ricky Doyle said last week. “But with film and everything the coaches really can slow everything down and make you see mistakes and really open up your game and understand the game a lot more.”

Doyle didn’t have any trouble keeping up with the pace on Sunday, tallying 12 points off the bench and earning the start in the second half.

“It was a lot of fun,” Doyle said after Michigan’s opening victory. “Finally getting out there with all these guys was a great experience. There is a lot more to come. It’s going to be a great year.”

The third standout freshmen of Michigan’s opening exhibition win was Muhammad Ali Abdur-Rahkman. The 6-foot-3 guard’s versatility has stood out early on as Beilein has been able to use him at the two-guard spot, but also the point guard position for short bursts. Abdur-Rahkman had 11 points, seven rebounds and three assists in the exhibition win.

Michigan’s freshmen are still learning the ropes, but they are also learning each other. Some have only been committed since June, while others have been committed for over a year. Still, they’ve only been on campus together for a couple of months and are trying to mesh into a team.

“We are a growing team,” Zak Irvin said after the win. “There were a lot of things that went well today, but there is plenty we still have to work on. We can do better communicating and on the defensive end. We came out to Italy and had a great game, but we also just have to enjoy and really take in everything on this trip.”