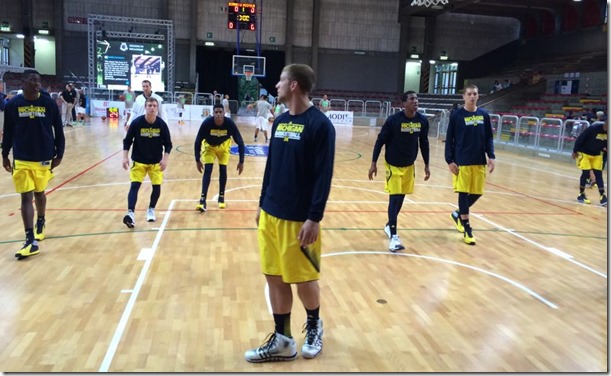 Michigan advanced to 2-0 during its Italian summer tour with a 93-53 victory over the Vicenza All-Stars on Tuesday.

The Wolverines gradually pulled away over the course of the four quarter FIBA rules game. Michigan led by 11 points after one quarter, 21 points at the half and 31 points after the third quarter before sealing the 40 point victory in the fourth.

“It was just good to see them play together because we did make some steps in the last game and we also discovered some things we have to work on a lot,” John Beilein said after the victory. “There are so many opportunities for us to get better, including turnovers and missed foul shots. What I’m proud of is that fourth quarter; we held them to eight points.”

Freshman big man Ricky Doyle had his best game of the tour, scoring 15 points and grabbing 14 rebounds in the victory. Doyle reached double figures for the second consecutive game.

“There were two things that Ricky really did well: rebound in traffic and finish in traffic. Those are big things for us,” Beilein explained. “He’s only 6-9, but he plays even bigger than that on some occasions and today was one of them.”

Doyle was pleased with how he was able to make adjustments from game one to game two.

“Game one, we were shooting really well. Zak was 5-for-5 from the field. In this game we weren’t making as many shots, but I transitioned from the first game to the second game,” Doyle explained. “I watched a lot of film, and watched what I could do to get those 50/50 rebounds that I should have gotten. Coach BA really helped me take an easier approach to getting those rebounds, giving me simple steps and it worked. Being more aggressive and timing my jumps are some of the things I paid attention to and tried to bring it back out on the court.”

Freshman starter Kameron Chatman also reached double figures, finishing with 17 points and six rebounds while shooting 8-of-15 from the floor.

“Muhammad has really gone out there and used his speed, where he has been able to get to the foul line again,” Beilein said. “That’s two games in a row. Right now I think what we are valuing is his ability to see the floor when he’s going his quickest.”

Abdur-Rahkman was pleased with his play, but reiterated that he’s just glad to get to play before the fall semester even starts.

“It’s been a great experience (so far),” Abdur-Rahkman said after the win. “Not many people get the chance to play as a freshman before the season starts. It gives you a good chance to get in a rhythm with the team and work on good chemistry. I think I’ve played decent; the team is playing better so it doesn’t really matter how I’m playing as long as the team is winning and I can contribute.”

Michigan freshman Austin Hatch earned playing time for the second second consecutive game, but missed his only jumpshot attempt of the game. Hatch has shown remarkable progress in recovering from his tragic 2011 plane crash.

Michigan’s final two games of its Italian tour should be increasingly difficult. The Wolverines will play Serie C squad Petrarca Padova on Wednesday. Padova plays in a lower division of Italian basketball, but is the first complete professional team (rather than All-Star showcase team) that Michigan will face on tour. Michigan’s Wednesday game will also be in Vicenza, where John Beilein was imprssed with the atmosphere.

“It was really good to have a crowd like this in this nice arena,” Beilein said. “Michigan travels very well; the brand travels very well and I think we saw how excited people were to see us over on this continent and in Italy in particular.”

Michigan will wrap up the tour on Friday against the Mantova Stings. The Stings were just promoted to the second division of Italian basketball and should provide the best competition of the week.