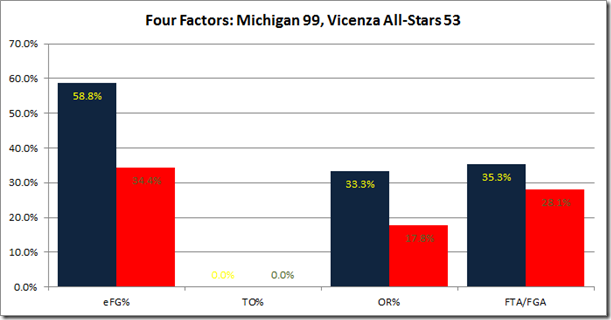 Michigan picked up another comfortable win over the Vicenza All-Stars on Tuesday and Michigan released a box score with everything but steals, turnovers and blocks. Since the game wasn’t streamed, here are some statistical observations and notes from the box score including our traditional  Three Factors graph.

Michigan still managed a 58.8 eFG%, but the Wolverines were just 6-of-21 from three-point range. Zak Irvin was 4-of-5 which means his teammates were just 2-of-16 (12.5%) from distance. Despite struggling outside the arc, Michigan was impressive inside the arc, converting 66% of its two-point field goals. Michigan got to the free throw line at a fairly high clip, but was just 13-of-24 (54%) from the charity stripe. Derrick Walton (0-3), Muhammad Ali Abdur-Rahkman (7-11) and Ricky Doyle (3-6) all missed at least three free throws.

Michigan’s rotation was fairly balance as nine Wolverines played between 18 and 25 minutes. Part of that may have been due to excessive foul trouble as eight different Wolverines were whistled for at least three fouls.

Michigan’s defensive numbers are impressive across the board – although turnover statistics are absent – as the Wolverines controlled the defensive glass and held Vicenza to just 37% shooting inside the arc and 21% outside the arc.

RELATED: Quotes, photos and clips from Michigan’s win over Vicenza