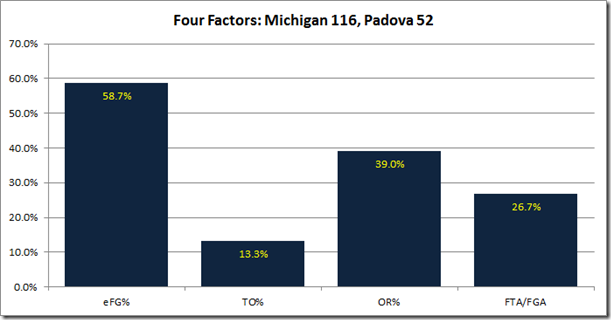 Michigan finally broke the century mark in its 116-52 win over Petrarca Padova on Wednesday. U-M released a box score (compiled by hand) and since the game wasn’t streamed, here are some statistical observations and notes from the box score including our traditional Four Factors graph.

It’s not much of a surprise that Michigan dominated all four factors offensively as it scored 116 points in 89 possessions and more than doubled up Padova. Padova was able to hang around for part of the first quarter, but Michigan stifled them in the second half – holding them to just 16 points total.

Michigan’s offense did everything you would expect against below-average competition. The Wolverines shot 59% on twos and 39% on threes for a 59% effective field goal percentage. The turnover woes from the first game were mostly eradicated as Michigan gave the ball away on just 13% of its offensive trips and also grabbed 39% of its missed shots.  Michigan didn’t get to the free throw line often, but that was of little concern as it scored 1.30 points per trip.

John Beilein mentioned that regardless of the competition, it’s good to play against someone that doesn’t know the plays and see how things work on film.

“In games like this, we just want to get video on it so we can teach players why things work and why things don’t work. That’s what’s real for us,” Beilein said. “We practice against ourselves and while we get better doing that, when you practice against others and you don’t know their schemes and you have to guard their themes, that’s very helpful to our progress.”

RELATED: Quotes, photos and clips from Michigan’s win over Padova