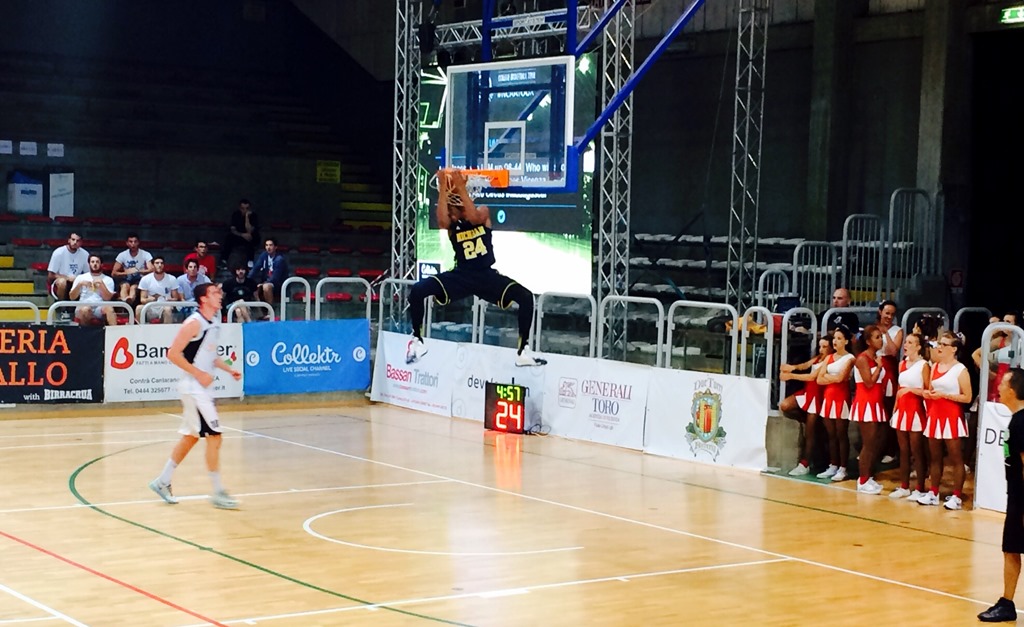 Michigan knocked off Petrarca Padova, 116-52, for its third straight exhibition victory in Italy.

Michigan knocked off Petrarca Padova, 116-52, for its third straight exhibition victory in Italy.

The Wolverines led 30-21 after the first quarter and managed to extend their lead to 63-36 by halftime before coasting to their easiest victory of the foreign tour. The Wolverines held Padova to just 18 points in the second half.

Zak Irvin poured in 18 points in the first half and finished with a team high 22 points for the game. Irvin was 9-of-16 from the floor and knocked down two triples and is averaging 22.3 points per game while shooting 69% from three-point range through three games.

“We’ve had three great games,” Irvin said after the win. “Each game we’re getting better. You can see it when we watch film, defensively we’re getting better. Our goal was to hold teams under 60 points and we were able to do that again tonight; then scoring 100 points is something special.”

“It would be too much to think about getting 20 and 20 from them, but if we needed to get double-figures, that’s a heck of a big man.”

Mark Donnal finished with a 20 point, 11 rebound double-double, bouncing back from a lackluster game in Michigan’s second outing. Donnal was 8-of-10 from the floor.

“We continue to show Mark and Ricky (Doyle) film so that they can get better,” Beilein said after the win. “I really don’t care what each one does; I care what they do collectively. Tonight was 29 points and almost 20 rebounds between the two of them. It would be too much to think about getting 20 and 20 from them, but if we needed to get double-figures, that’s a heck of a big man.”

Donnal admitted some relief after bouncing back Tuesday’s game.

“It was definitely a good game for me coming off of yesterday’s game,” he said. “Yesterday I was in foul trouble, so this got my confidence up a little bit and I was pretty happy with my performance. My teammates found me open and I got some easy buckets.”

“You never want to get lazy on the court.”

Dawkins stressed the importance of staying focused despite a lopsided scoreline.

“You never want to get lazy on the court, because that’s practicing bad habits,” Dawkins said. “You want to keep playing the way you should play, no matter what the score is. Whether it’s high or low, keep playing the same game so when there are close games there’s no difference and you’re always ready to go.”

Michigan was able to play its entire bench once again as Andrew Dakich, Austin Hatch and Sean Lonergan all earned playing time.

Before the game, the Wolverines spent the day visiting the U.S. Army Garrison and the 173rd Airborne.

“These young men have seen some special things on this trip, and they all really enjoyed today. To be with the troops, feed them and sit with them and then go see some of their weapons and trucks, tanks and humvees; the team loved that,” Beilein said. “We were on our feet a lot today. It has been about six straight days spent on our feet and they responded, so I’m happy about their whole attitude. They’re enjoying it and embracing the culture that we’re exposing them to. At the same time, they’re coming to play.”

Michigan will wrap up its foreign tour on Friday when it faces the Mantova Stings in Poggio Rusco. The Stings were recently promoted to Italian A2 Gold, the second division of Italian basketball, and should provide Michigan’s toughest test overseas.

This story will be updated when quotes are made available by the University of Michigan.