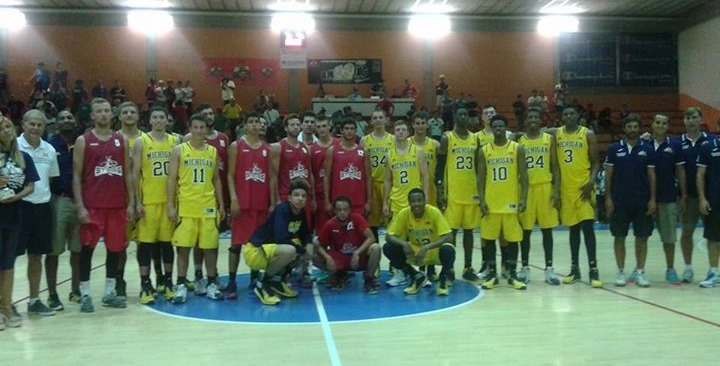 Michigan faced a better team on Friday, but still pulled away with another exhibition victory. The Wolverines knocked off the Mantova Stings, 96-76, and will leave Italy with a perfect record.

Mantova was able to hang around throughout much of the first half and the Wolverines led just 48-43 at the half. The Stings even managed to take the lead, 49-48, early in the third quarter.

“Every game has helped us in different ways,” John Beilein said after the game. “These games are not about the score, but experiencing playing basketball with a team like we have right now. As we went through the games, we saw new things that we have to learn. Today we played a very experienced team; they had a plan. They haven’t been practicing a lot, but the things that they ran are a part of European basketball everywhere. They picked us apart at times, however we scored some points, too.”

The Wolverines had outscored their first three Italian opponents by an average of 43 points per game, but the Stings, recently promoted to the second division of Italian basketball, were the best team that Michigan faced in Italy. The Wolverines outlasted Mantova down the stretch with a 32-12 run and outscored their Italian opposition 23-10 in the final quarter of the game.

“They were up in the second half, so we had to turn up the defensive intensity,” Caris LeVert said. “We knocked down some shots in the third and fourth quarters, so that was big for us. Off the bench, Muhammad really played well when I was in foul trouble, so that was huge for us.”

Michigan had seven players reach double figures and was led by Zak Irvin with 16 points.

Zak Irvin and Caris LeVert were Michigan’s only two players to reach double-figures in all four of Michigan’s overseas games. Irvin finished with 16 points and 10 rebounds while LeVert finished with 15 points, five assists, four rebounds and three steals.

This was the final game in Michigan’s exhibition tour and the Wolverines are set to return home on Sunday. Players will have some time to return home to their families before the semester begins in Ann Arbor.

“Mostly it built confidence,” Derrick Walton said. “For the freshmen, being able to come out and play with us to get a couple of games under their belt gives us team chemistry.”

John Beilein was also pleased with the tour.

“Without question,” Beilein responded when asked if the tour was a success. “The number one thing is that we got extra days of practice and we also got to play these four games. Close to that in importance is the relationship-building we were able to do on this trip. From player-to-player, player-to-coach and coach-to-player, that was really tremendous. Now let’s all get home safely, and this will have been a tremendous trip.”