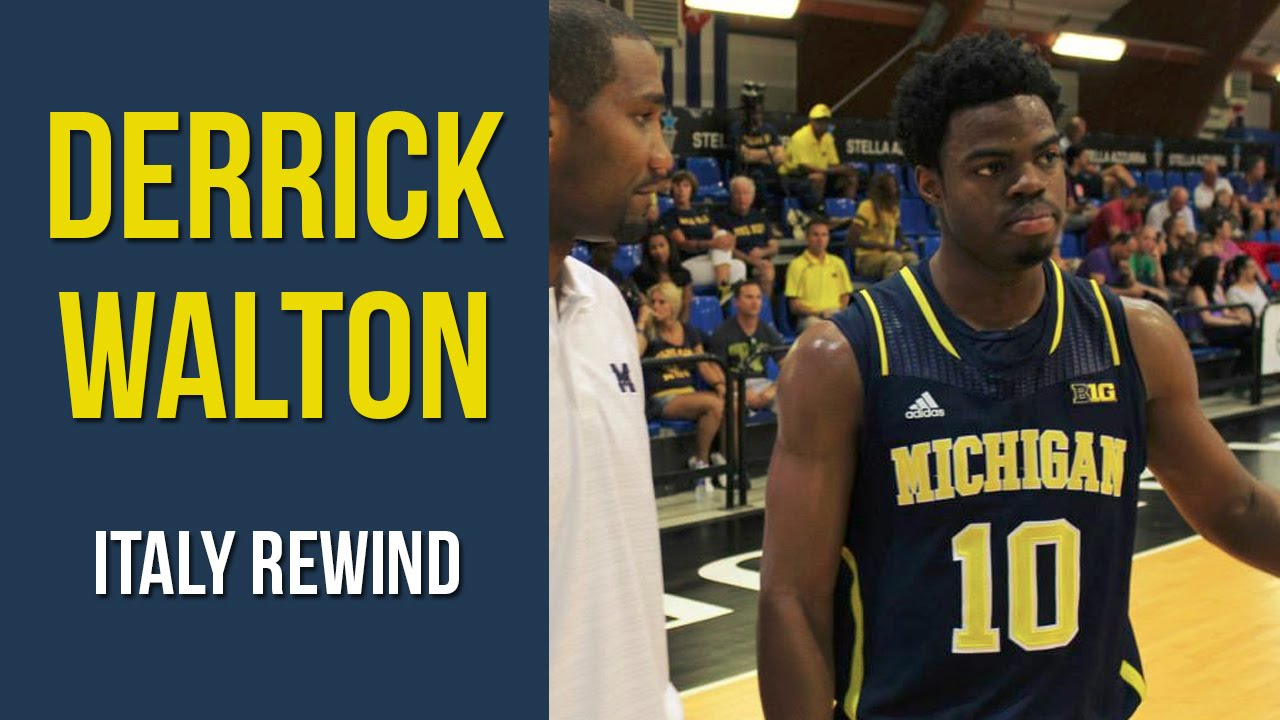 Derrick Walton was Michigan’s fourth option offensively last season, but expectations are high for the 6-foot point guard from Detroit. Walton was a complementary star last season and while he made huge plays on the road at Michigan State, Nebraska and Ohio State he was always just out of the limelight.

With Nik Stauskas, Glenn Robinson III, Mitch McGary and Jordan Morgan gone, all eyes will be on Walton to make a sophomore leap. He was efficient when he picked his spots last year and this blog has even hypothesized that he could make a Yogi Ferrell-like jump during his sophomore year.

Walton was solid in Italy – averaging nine points, five rebounds and three assists per game – but once again it was his teammates that were grabbing the boisterous stat lines, attention and headlines.  It’s tough to read too much from a trip to Italy, but for whatever reason Walton never had to take control of the game.

So what can we read into Walton’s numbers from overseas? Right now they are inconclusive.

Walton ranked 4th in shot attempts, second in assists, but just eighth in points per game. Spike Albrecht was the only Michigan rotation player to average fewer minutes per game than Walton, last year’s No. 4 scorer.

The easy explanation is that Walton was content to let everyone else get their shot attempts while he kept the offense moving. Playing with new teammates and a 24 second clock, it’s feasible that Walton just didn’t get the ball back before shot attempts went up. A good point guard doesn’t need to take a lot of shots in a blowout win and Walton has never been one to force his offense over others. The other tendency noticeable on film was that Michigan scored an inordinate amount of transition baskets where Walton or another wing simply pushed the ball up the floor to someone else for an easy layup

On the other hand, Walton didn’t shoot the ball well — 56% on twos, 27% on threes for a 50 eFG% and just 50% at the free throw line – and he only reached double-figures twice (in the first and last game of the week) despite Michigan averaging just over 100 points per game.

“The key for me was just being aggressive and knowing that the team needed me tonight,” Walton said after finishing the tour with a 14 point performance. “I came out and hit shots I’d be expected to hit during the season, so the early start was important.”

Walton shot the ball very well last season, so it’s premature to worry about his shooting numbers after a preseason tour in Italy. However, it’s worth noting that Irvin, LeVert and Chatman all attempted significantly more shots than Walton overseas.

Walton’s takeaway from the 10 days in Europe had to do with learning about his teammates, many of whom he’s met for the first time in the last several months.

“Mostly it built confidence,” he said. “For the freshmen, being able to come out and play with us to get a couple of games under their belt gives us team chemistry.

“It’s brought the team a lot closer together. We have a lot of young guys that we’ve only seen for a couple months, so being able to room with them, talk with them and learn about their personal lives, it brings us closer together on the court. It makes for better continuity out on the floor.”

Walton still had plenty of highlights overseas including a couple devastating Euro-step moves in transition, impressive finishes at the basket and one of his patented and-one jump shots. It’s still far too early to worry about Walton’s performance in Italy, but it’s time to start thinking about how and where he fits into Michigan’s offense this season. The fear going into the season was that Walton might need to be Michigan’s No. 2 scoring threat, but the good news is that he’ll have plenty of help running an offense featuring Caris LeVert, Zak Irvin and Kameron Chatman.