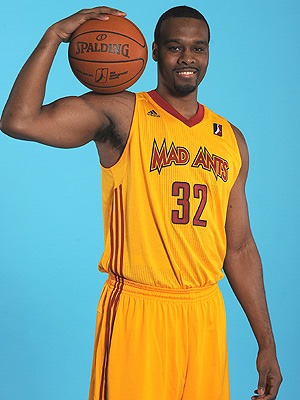 Former Michigan center Chris Hunter was announced as Michigan’s Director of Player Personnel this afternoon. Hunter played at Michigan from 2002 through 2006 before playing professionally for the last seven years, most recently with the Fort Wayne Mad Ants. Here’s the complete University of Michigan release on Hunter’s hiring.

“It is always great to have a Michigan alum on staff and we are looking forward to Chris Hunter’s return to Michigan Basketball in this new role,” said Beilein. “With Chris’s experience as a former student-athlete, his degree from the Stephen M. Ross School of Business, as well as his professional playing experience, we know he will bring great talent and expertise to our program. We are excited to have Chris and his family back in Ann Arbor.”

“I look forward to assisting the student athletes in having a valuable and productive academic experience,” said Hunter. “I am thrilled and honored to have the opportunity to advance the Michigan Basketball program everyday through hard work and diligence.

Hunter, who earned a Business Administration degree from the Stephen M. Ross School of Business, was a key member of U-M’s 2004 NIT Championship team and the 2006 NIT runner-up team. A team captain during the 2005-06 season, he played in 105 career games with 27 starts while averaging 7.0 points, 3.5 rebounds and 18.0 minutes per game.

Following his four seasons in Ann Arbor, Hunter began his professional career overseas with Herens Basket of Switzerland, AZS Koszalin of Poland and Spotter Lueven of Belgium from 2006-08. He returned to the United States to play with the NBA Developmental League’s Fort Wayne Mad Ants in 2008. Overall he had three stints with the Mad Ants in 47 total games, in which he scored double digits in 44. He was named to the 2009 NBADL All Star team and also served as team captain.

Hunter participated in two training camps and off season activities with the New York Knicks in 2009 — including preseason games — under the direction of head coach Mike D’Antoni and lead assistant coach Mike Woodson. During the 2009-10 season, he played in 60 games, starting nine, with the NBA’s Golden State Warriors under Don Nelson. He highlighted the season scoring 22 points on eight field goals against the defending champion L.A. Lakers.

A native of Gary, Ind., Hunter prepped at West Side High School where he was an All-State first team performer. He and his wife, Quanda Brown, have two children — Christopher Jayden (CJ) and Cameron Jorden (Cam).