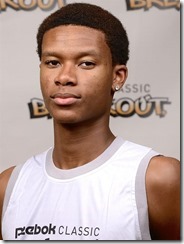 Michigan’s class of 2015 recruiting has focused primarily on one target for much of the last month: South Carolina guard PJ Dozier.

Dozier has Michigan in his final five and is scheduled to take his first official visit to Ann Arbor on September 26th. He’ll also visit Louisville (Oct. 3), Georgetown (Oct. 17), North Carolina (Oct. 24) and South Carolina (Oct. 31).  Dozier doesn’t have a formal scholarship offer from the Wolverines because he hasn’t visited campus, but is expected to receive an offer on his trip.

Dozier, the 247Sports Composite No. 26 player in the class, has the ability to play both guard spots at the next level and has emphasized the importance of playing on the ball in college. He’s coming off an impressive summer where he demonstrated that he was fully healthy after missing his junior season due to knee surgery.