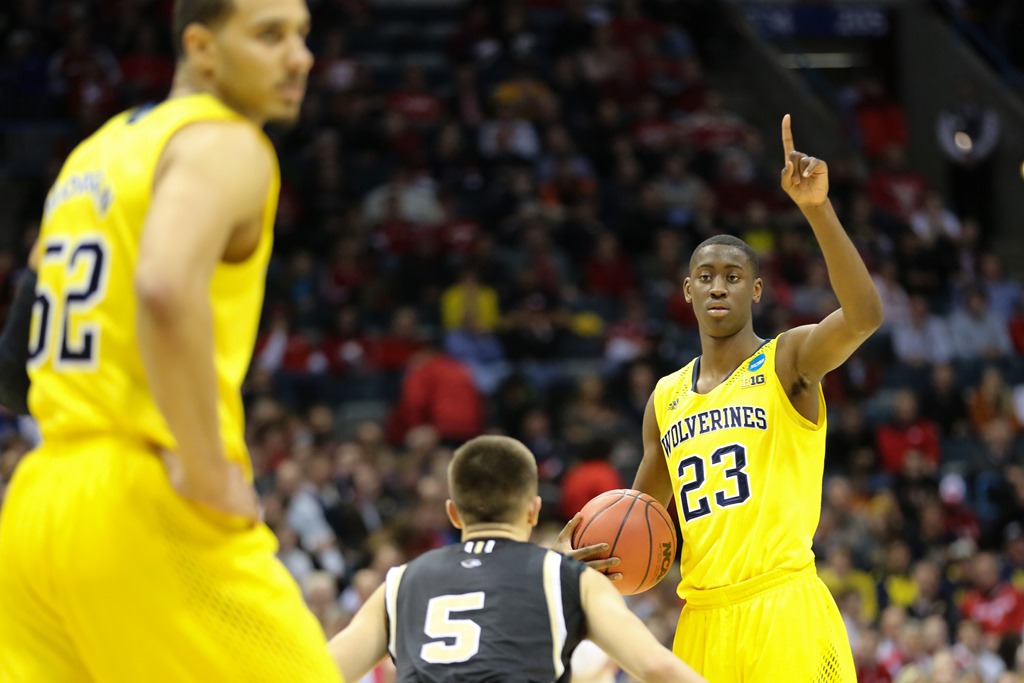 With the official start of practice three weeks from today, UM Hoops and Inside the Hall have again partnered to bring you a preseason breakdown of the top 25 players in the Big Ten for the 2014-2015 season. Our selection process involved much deliberation to arrive at a list we hope will provide plenty of reaction and debate. The series will be broken into five parts and our final installment of players 5-1 is available below: (Previously: 25-21,20-16, 15-11, 10-6)

As a sophomore, Ferrell made a leap from bring primarily a distributor to one of the league’s top scorers. The Hoosiers put the ball in the Indianapolis native’s hands often and he accounted for half of the team’s made 3-pointers on the season with 88. He was also reasonably efficient from distance as he managed to knock down 40 percent of his attempts from behind the arc. Ferrell ranked seventh in the conference in assist rate (25.6 percent) and while his turnover rate (18 percent) was improved, it was still too high as Indiana finished as the Big Ten’s worst turnover team. Going into his junior season, Ferrell’s workload may decrease a bit as the Hoosiers have added several key backcourt pieces, including James Blackmon Jr., which should allow him to score more efficiently and also distribute the ball more.

Dekker entered his sophomore season with high expectations and while his efficiency dipped a bit from his freshman season, he was a big reason why the Badgers went to their first Final Four under Bo Ryan. Listed at 6-foot-7 during his first two seasons in Madison, Dekker has now reportedly sprouted up a few inches to 6-foot-9 and has the perfect skillset to play the four. He made 55 percent of his 2s, stepped out and hit the 3-pointer when it was available and also was Wisconsin’s second best defensive rebounder behind Frank Kaminsky. He also very rarely turned it over (10.2 turnover percent), which is fourth best among returning players in the league. Two key areas for of improvement Dekker as a junior are his free throw shooting (68.6 percent) and 3-point shooting percentage (32.6), which, if he improves upon both, could catapult him higher up this list by season’s end.

The Big Ten’s leading returning scorer averaged 18.1 points per game for Nebraska last season and was the primary reason why Tim Miles’ group was able to overachieve and earn an NCAA tournament berth. Petteway used 31.7 percent of Nebraska’s offensive possessions, more than any Big Ten player since Tim Frazier in 2012. He wasn’t the most efficient player in the conference by any means, but that’s to be expected with such a high usage rate. Nebraska had the 10th best offense in Big Ten games and if the Huskers are going to improve this season, a more balanced attack might be needed. Petteway is the best ball screen player in the Big Ten by a wide margin and 39 percent of his offensive possessions came off of the pick-and-roll. We worry a bit about his regression due to his reliance on long threes and jumpers off the dribble, but Petteway shot just 33 percent from long distance last season and was still very productive.

Much was made of Nik Stauskas’s breakout season last year, but Caris LeVert was arguably the most-improved player in the conference last season. LeVert nearly redshirted his freshman season and played sparingly before emerging as one of the league’s best playmakers in 2014. LeVert was instrumental in Michigan’s late season run to the Big Ten Championship – averaging 16.5 points per game over the final 10 conference games. He shot an impressive 44 percent from three-point range in Big Ten play and will have an increased role as a junior. LeVert will have to learn how to serve as Michigan’s primary option in 2014-15 and will also have to improve his distribution, an area where Stauskas excelled on the wing.

Kaminsky earns the top spot on our list thanks to his offensive versatility. He also holds the distinction of being the best returning player on the consensus best team in the conference.  The Badgers return their entire rotation minus Ben Brust this season and Kaminsky should be poised to build on his impressive junior season. The 6-foot-11 senior shot 58 percent on 2s, 38 percent on 3s and was also one of the league’s better rebounders and shot blockers. He’s not only one of the best low-post scorers in the league – he scored 1.167 points per post up – he’s also capable of scoring by other means. Only 25 percent of his offensive possessions were post-ups, with the rest made up of pick-and-pop jumpers and face-up possessions. Despite his successful season, it was the NCAA tournament that left a lasting impression. Kaminsky averaged 16.4 points and six rebounds per game while leading the Badgers to the Final Four and earning NCAA tournament West Regional Most Outstanding Player honors.