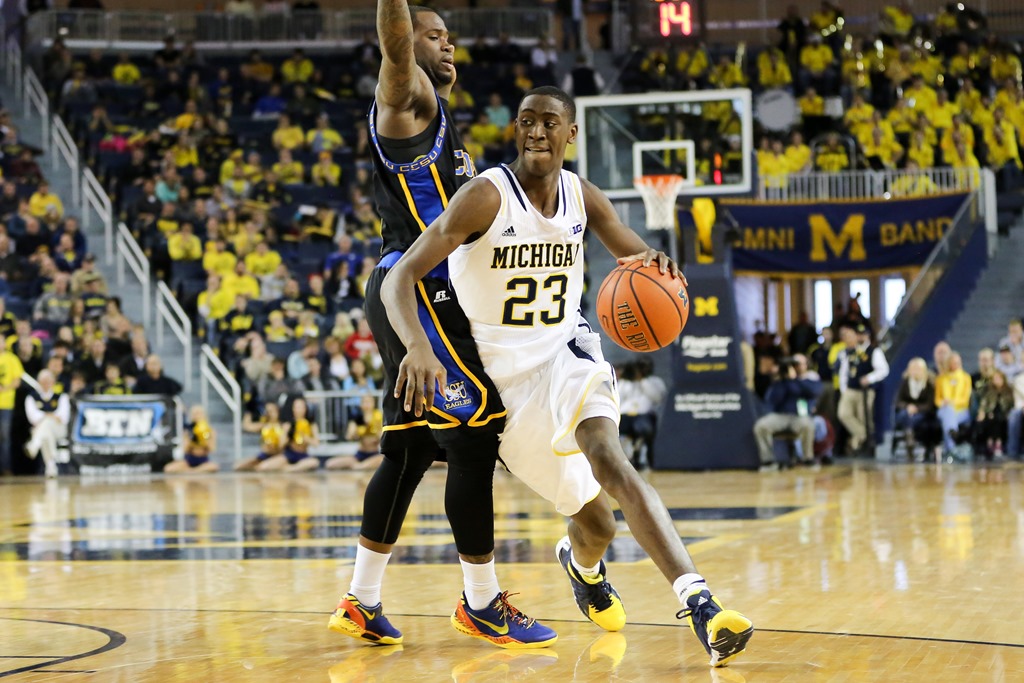 Everybody hates the mid-range jumper.

Iowa State has nearly eliminated it from its offense. Daryl Morey has tried to do something similar in the NBA D-League with Rio Grande Valley.

John Gasaway recently tweeted that “’developing a mid-range game’ is like hitting well from the rough. Need to do it sometimes, but the best solution is don’t go there.”

But while everyone wants to exterminate the mid-range jumper, I’m here to tell you that it might be the most important area for Caris LeVert to improve his game this season.

Being the focal point of John Beilein’s offense comes with plenty of responsibility, but it has also been a fast-track to the NBA. Over the last four seasons, Michigan’s No. 1 and No. 2 offensive options – Trey Burke, Nik Stauskas, Tim Hardaway Jr. and Glenn Robinson III — have all heard their names on draft night before their eligibility expired. LeVert appears to have next up.

For all of LeVert’s achievement as a sophomore, he still has a few holes in his game. He needs to continue to add weight, distribute in the half-court and will have an increased rebounding burden in 2015, but the mid-range is his biggest weak spot. 111 of LeVert’s 369 field goal attempts last season were outside of five feet, but inside the three-point line and he made just 29.7% of those attempts.

Step back to three-point range and LeVert made 41% of 147 attempts. Move closer to the basket LeVert made an impressive 62% of his 113 attempts.  He was terrific inside despite his slender frame and very effective outside – especially down the stretch – but for whatever reason he couldn’t find consistency in the mid-range.

The theory behind eliminating the mid-range shot makes plenty of sense – Why shoot 35% from 18 feet when you can shoot 35% from 22 feet and earn an extra point? – but a successful mid-range attack is still critical to a balanced offense. At least some scoring production needs to come from the middle of the floor to keep opposing defenses honest.

Sure it would be ideal if half of LeVert’s shot attempts were at the rim and the other half were open threes. But as the presumed focal point of Michigan’s offense, LeVert is going to be under pressure to make plays in less than ideal situations. He’s going to have to knock in mid-range jumpers because somebody on Michigan’s roster is going to have to.

As a team, Michigan shot 37.4% on mid-range jumpers last season and the Wolverines lost two players that excelled in the mid-range to the NBA Draft. Glenn Robinson III was Michigan’s mid-range specialist, making 41.1% of a team-high 124 attempts, and it’s no secret that Nik Stauskas (39% on 80 attempts) was a pretty good shooter from any spot on the floor. LeVert actually had more mid-range attempts than Stauskas, but his effectiveness lagged behind.

Last year the threat of Robinson knocking down pin-down jumpers from the elbow, or Stauskas pulling up from 16-feet off of a ball screen, helped open up space for players like LeVert, Zak Irvin and Derrick Walton. This year, the onus will be on LeVert to be Michigan’s primary creator in 2014-15. The majority of mid-range jumpers are created shots off the dribble, unlike many three-pointers which are of the catch-and-shoot variety.

LeVert is the best creator on Michigan’s roster and the Wolverines don’t have a lot of proven mid-range threats. The Wolverines’ three returning rotation players — Walton, Irvin and Spike Albrecht – were just 24 of 79 (30%) from the mid-range last season. Irvin is another natural candidate to improve his mid-range production and incoming freshman, and likely starter, Kameron Chatman is another player with a prototypical size and skillset to impress in the mid-range.

LeVert has a full collection of hesitation moves, crossover dribbles and a silky smooth outside shot. He can get wherever he wants on the floor, but the next step is to finish from all areas.. If he’s able to increase his productivity in the middle of the court, he could very well be on the same fast track as Michigan’s previous offensive leaders.