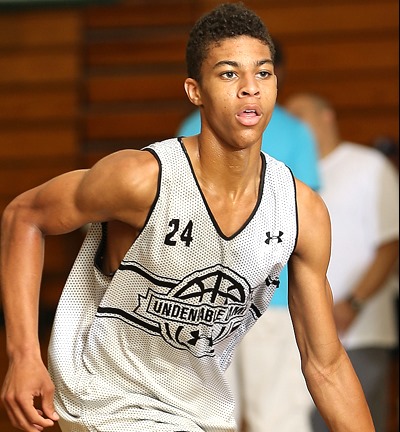 Michigan’s coaching staff has been on the road for the last week, checking in on various class of 2015, 2016 and 2017 targets across the country. Michigan’s 2015 recruiting board has narrowed significantly, but the 2016 board remains full with seven outstanding scholarship offers and a commitment in hand. Here’s the latest on where things stand with Michigan’s recruiting.

The commitment of Duncan Robinson changed Michigan’s recruiting focus in the class of 2015. Robinson is a transfer, but he’ll gain eligibility next season and his commitment caused the Wolverines to cool on 2015 guard Jalen Coleman, who is now down to a final three of Notre Dame, UNLV and Illinois. Other former offers, Jalen Brunson and Eric Davis, made recent commitments to Villanova and Texas respectively, which leaves one primary option in the class of 2015: PJ Dozier.

John Beilein will have an in-home visit with Dozier today, following up on LaVall Jordan’s in-home visit last week. Michigan will then host Dozier on his first official visit on September 26th for home football weekend against Minnesota. Dozier also has trips planned to North Carolina, South Carolina and Georgetown.

Michigan also remains in contact with five-star big man Caleb Swanigan. Michigan State is the presumed leader in Swanigan’s recruitment, but the Wolverines hosted Swanigan for camp last year and continue to work in his recruitment. Kentucky and Purdue are two other schools that have been linked to Swanigan as Matt Painter had an in-home visit on Monday.

Michigan’s lone commitment in the class of 2016 continues to show improvement on film. We posted fresh highlights of Teske earlier this week and the Wolverines were already in to check on their future post player during the evaluation period.

John Beilein was in to check on Derryck Thornton and the Wolverines continue to do everything right in his recruitment. Thornton is now a top ten recruit nationally, ranked No. 7 in the 247 Sports Composite and as the No. 1 point guard in the country by Scout.com. The Wolverines continue to have plenty of competition and Kentucky appears to have made the biggest impact. Fall visits to Kentucky for Big Blue Madness and Michigan for a football game have been discussed as the next step in Thronton’s recruitment.

John Beilein also stopped in to see TJ Leaf when he was on the West coast. Arizona’s Sean Miller, Florida coach Billy Donovan and UCLA have also stopped by to see the versatile combo forward. Leaf has discussed a February visit to Michigan and there’s been speculation that he could aim to make a college decision this spring. Michigan has hosted Leaf on two unofficial visits and there’s heavy mutual interest. Leaf’s top ten includes Arizona, Duke, Florida, Indiana, Iowa, SDSU, Texas, UCLA and Xavier along with Michigan.

John Beilein, Jeff Meyer and LaVall Jordan were all in-home with Tyus Battle and his family on Monday. The Wolverine staff made an impression on Battle’s father with their thorough approach.

“They did a great job of laying out for Tyus what it would be like at Michigan for him and how they would develop him to reach his goals, and the campus life and stuff like that,” Gary Battle told ZagsBlog. “They did a PowerPoint on the iPad and they were pretty thorough. They were really good. Really good.”

John Beilein and Tom Izzo were in to watch Cassius Winston last week and Fred Hoiberg (with two assistants) and Thad Matta have also been in to watch the talented point guard. Winston visited both in-state schools for football games during over Labor Day, but Ohio State and Iowa State have been very involved in Winston’s recruitment for a long time. Winston is up to No. 36 in the 247 Sports Composite rankings and should be poised for a big season at U of D.

John Beilein, Jeff Meyer and LaVall Jordan were also in to check up on Michigan’s most recent offer, Josh Langford, on Tuesday. Langford and his family have kept things close to the vest, but expect Michigan to be very involved in this recruitment once the Langfords begin to move the process along. Florida Atlantic, Tennessee, Florida, Michigan State, California, Stanford, Mississippi State, Alabama, Auburn and Memphis are other schools expected to check up on Langford.

Jamal Murray doesn’t hold a Michigan offer yet, but the Wolverines have made their interest in the Canadian combo guard clear. John Beilein made the trip to Canada to watch the 6-foot-5 guard last week. Murray is also hearing from Michigan State, Syracuse, Illinois among others and there remains a chance that he could reclassify to the 2015 class. Murray will play on a loaded squad this season at Athlete Institute as Thon and Matur Maker both opted to transfer to the Canadian powerhouse.

Michigan continues to track the 6-foot-7 Northland scoring forward and he continues to improve. Wolverine assistant coach Bacari Alexander was in to check in with Seth Towns last week and Towns continues to speak favorably about Michigan.

“You know, it’s a great system, great school,” Towns told Zach Fleer.  “[Alexander] was talking about how I fit just right into their program, I mean, I can’t argue with him, so I’m just looking forward to seeing how things work out.”

Ohio State, UCLA Wisconsin, Iowa and Harvard were also in to check in on Towns recently.

Quentin Goodin visited Florida over the weekend and added an offer from the Gators. Alabama, Marquette, Tennessee and Xavier are a few schools that have been or are planning to be in to check in on Goodin during the fall evaluation period thus far, according to reports.

At one point mutual interest between Miles Bridges and Michigan appeared to be very cool, but it’s picked up a bit in recent months. John Beilein and Bacari Alexander have been in contact with Bridges and his family and the Wolverines were in to watch the do-it-all forward last week.

Michigan was in to check on Tyler Cook last week along with Kansas, Missouri and St. Louis. Cook visited Ann Arbor in August and the No. 58 Composite forward is another front court player to track this season.

Class of 2017 Targets to Watch

John Beilein watched 2017 Canadian wing guard Christian Davis during the evaluation period and Saginaw Arthur Hill super-sophomore Brian Bowen has already visited Ann Arbor for a football game. It’s still very early for class of 2017 recruiting, but these are two targets that are high on Michigan’s recruiting board in the early stages.