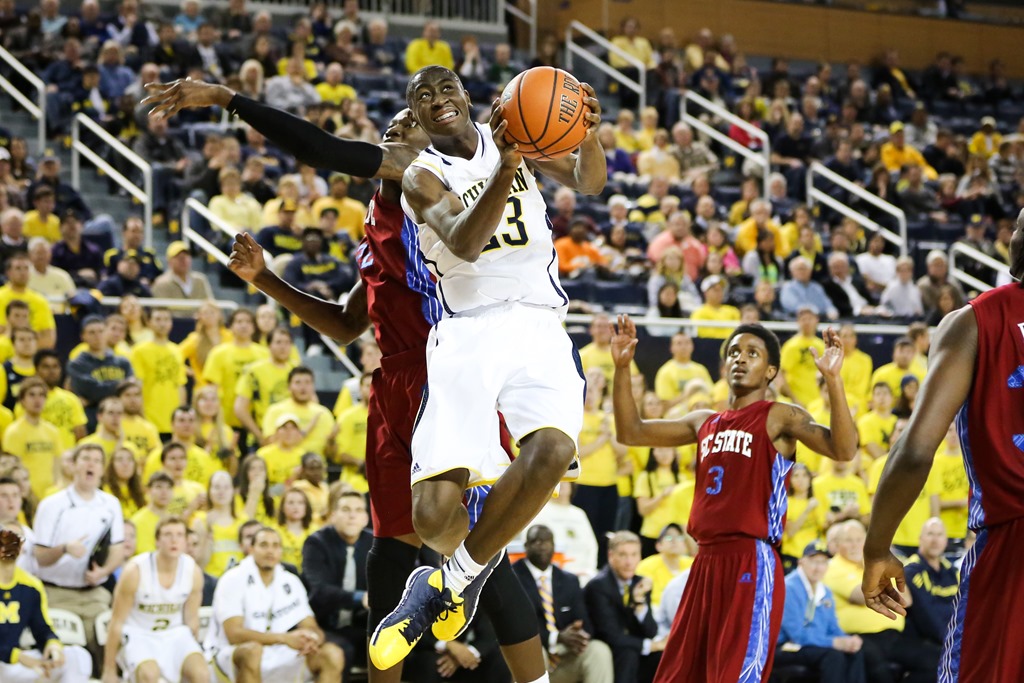 @charlesmalu5: Will Kameron Chatman be a straight up 4, or will he play some 3? How does he compare to GR3?

Expect Kameron Chatman to play the majority of, if not all, of his time at the four position. For all intents and purposes, the three and the four are the same position in Michigan’s offense – they are just on opposite sides of the floor. John Beilein started referring to the three and four positions as the right and left side forwards and Chatman is an ideal fit as a right side forward to replace Glenn Robinson III.

Michigan’s rotation in Italy started with Irvin and Chatman at the three and four respectively and when Aubrey Dawkins would check in to replace either player – the starter still on the floor would move to the four. This allows Chatman and Dawkins to only learn one position while Irvin (who played backup minutes at the four last season) can play both.

Chatman is a natural lefty, which means he’ll be comfortable initiating the offense from the right wing (driving into the middle of the floor). While he’s a natural fit for the position, he’s a very different player than the man that he’ll replace. Robinson was known for his athleticism and finishing ability at the four, two traits that aren’t necessarily Chatman’s bread and butter.

Instead, Chatman will give Michigan a more mature offensive player without quite as much athleticism. Measuring in at 6-foot-7, Chatman has the height to play the position and he also has impressive ball-handling and passing ability to go along with a smooth mid-range jumper and a great basketball IQ.

@xGoblue37x: How big of a role do you think the freshman DJ Wilson will have this season?

Wilson missed Michigan’s summer trip to Italy (and the practices leading up to it) with a broken pinkie finger. Those were valuable reps and minutes that he missed, so he’s a bit behind the curve compared to Michigan’s other freshmen. Kameron Chatman, Ricky Doyle and Mark Donnal have all gotten in-game reps in the front court. But Wilson still brings an element that Michigan doesn’t have: he’s longer and more athletic than any of Michigan’s other options in the front court. He needs to add muscle but he could give the Wolverines that finishing and shot blocking option that they lack around the basket. For those reasons, I expect we’ll see Michigan give Wilson a chance, even if he’s playing catch up to open the season.

@ChrisUlvinen: What do you think the offensive identity will be when it comes down to crunch time?

I have a hard time seeing the ball in anyone other than Caris LeVert’s hands in crunch time. There are obviously some other options (Derrick Walton made a handful of huge, clutch plays on the road last season and Zak Irvin could lead Michigan in scoring), but LeVert is the most complete player with the ball in his hands. He can run ball screens or isolation sets, he can shoot the ball or get to the rim, or even find a teammate. You want the ball in the hands of your best creator, not necessarily your best scorer late in games. LeVert can create his own offense, but he’ll also be able to find Irvin and Walton for potential big shots.

A great example of this was Nik Stauskas passing to Jordan Morgan late in Michigan’s Big Ten Tournament win over Illinois. Morgan was never the primary option, but Michigan had an offensive weapon that wasn’t afraid to distribute the ball late in the clock. Last year was an interesting case study for ‘crunch time’ production overall because Michigan gave the ball to so many different people, unlike the two years before where the ball was almost always in Trey Burke’s hands. We saw Nik Stauskas, Glenn Robinson III, Caris LeVert and Derrick Walton all have their number called at one point or another late in games in 2013-14.

‏@Brian_Groesser: What is a reasonable expectation of collective production out of the 5 spot this season?

It’s not so much what Michigan gets from Mark Donnal, Ricky Doyle and potentially DJ Wilson on the stat sheet that will worry John Beilein most. The keys will be whether Michigan can: a) defend opposing five men successfully and b) clean up the defensive glass.

Jordan Morgan was critical to Michigan’s success throughout most of his career, but his statistical production was never all too important. Morgan only reached double-figures five times during the regular season last year before exploding in the NCAA tournament and averaging close to a double-double. What he did well was anchor the defense, keep Michigan respectable on the defensive glass and finish around the basket with ruthless efficiency.

In an ideal world Michigan would probably hope for about a double-double combined from all of its options at the five position, but it can live without that. Pay closer attention to Michigan’s defensive rebounding rate and see whether it can hover around 70% and whether it can hold up against bigger opponents.

@xDQ44: Most likely breakout star not named LeVert or Irvin? Someone like Chatman, Donnal, Doyle, etc.

Well it’s tough to breakout as a freshman, because there’s not really a benchmark to compare. But LeVert, Irvin, Walton and Albrecht are Michigan’s only returning rotation players so there aren’t too many candidates. I still think Derrick Walton is poised for a big season, despite his pedestrian numbers during Michigan’s Italian tour. Walton was very good as a freshman, but is capable of taking on a much bigger role in the offense. We’ve discussed his breakout potential earlier this summer and at this point it’s tough to bet against Beilein and Lavall Jordan’s ability to develop point guards.