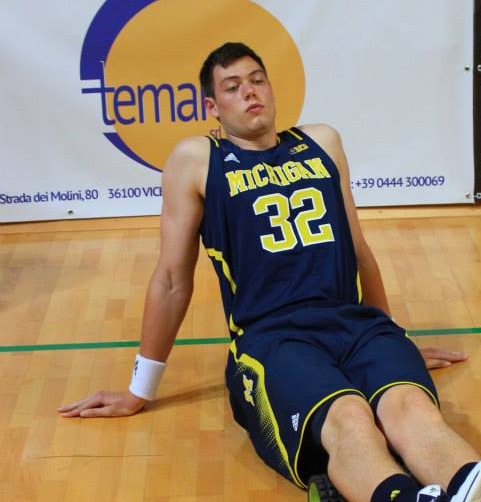 Jordan Morgan was the constant during Michigan’s last four seasons of unprecedented success.

The things that Morgan contributed were often overlooked. He made 70% of his layups, but his offensive game was limited elsewhere. He held the defense together with his rebounding and leadership, but those contributions rarely showed up on the stat sheet. The many NBA talents that he shared the court with usually grabbed all of the headlines, but Morgan was undoubtedly the glue that held things together in Ann Arbor.

Now for the first time since 2009-10, when Morgan watched from the bench while the Wolverines went 15-17 during his redshirt season, Michigan will have to learn to play without Jordan Morgan.

Left to fill the void is a group of players that, like Morgan during his freshman season, have barely played at this level. Max Bielfeldt is entering his senior year, but he’s played less than 200 minutes in his career. The three freshman – redshirt Mark Donnal and true freshmen Ricky Doyle and DJ Wilson – have all yet to play a collegiate game. Ready or not, these four are going to have to hold down the center position for the Wolverines.

Bielfeldt and Wilson sat out Michigan’s Italian tour with injuries, but both Donnal and Doyle had their moments overseas. Despite both players averaging double-figures, John Beilein admitted that there are still questions facing his frontcourt.

“Both Ricky and Mark have had interesting games, where, one time Ricky didn’t get a rebound (in Italy) and Mark had a double-double all of the sudden,” Beilein explained. “Both of them are making really good progress, and we’d like to see more of that. I like what I’ve seen, but as I mentioned with DJ, after 20 hours of practice and another 20 hours I’ll be able to answer that better. Both of them are going to play a lot at this juncture. Max is going to be competing, too. We haven’t seen enough of him and obviously we have DJ as an extra option.”

Michigan tipped off its first fall practice on Saturday and the coaches eyes were undoubtedly on their big men to see what they can bring to the table. Beilein made it clear that they starting five position was still wide open and he wasn’t ready to name a leader.

“I need to watch both of them more,” Beilein said of Donnal and Doyle. “But at the end of the preseason here, when we get into November, one will probably have the upper hand on the other, but I can’t make that call yet.”

Beilein isn’t ready to name a starter and he’s not ready to pigeonhole either player into their stereotypical roles.

“We may get situational some times,” he admitted. “But I wouldn’t discount Mark’s inside game or Ricky’s outside game. The perception would be that one is one thing and the other is the other thing, but I think both have the ability to play the other’s game and that’s what we’re working on, so they can be really versatile.”

Out of high school, Donnal was generally praised for his shooting ability. The 6-foot-9 big man knocked down the three-point shot with reliability at Anthony Wayne, but Beilein was quick to emphasize that he’s not yet on the level of some of his great shooting big men. In Italy, Donnal missed three triples in his first two games before bouncing back with a 20 point performance — all from inside the arc.

“He’s tested very well in that, and now we have to do it on the court,” Beilein said. “I remember back to our exhibition game when he hit a three the first time he touched the ball. He’s not in the (Kevin) Pittsnoggle mold, where he’s a three-point shooter, or even DeShawn Sims, who shot it very well from there. He can shoot from outside, though.”

Conversely, Doyle was known more for his ‘old-school’ approach to the game among college scouts. He’s regarded as a more physical player that likes to play with his back to the basket and eat up space. He’s also a capable finisher around the rim despite not being regarded for his athleticism.

“Ricky Doyle is a great big who is playing really well right now,” Michigan sophomore Zak Irvin said. “He’s able to finish with his right hand or his left hand and is also a big guy down low. Coming up here early and spending the summer her has also helped his game a lot, being with Coach Sanderson.”

While Doyle and Donnal were forced to man the middle by themselves in Italy, they’ll have some help this winter.

Max Bielfeldt has returned to action after missing most of the summer due to hip surgery. Bielfeldt has played limited minutes during his first three years in Ann Arbor, but he holds the distinction of actually playing in a Division I game.

D.J Wilson is an even more intriguing option. Wilson missed significant time with a broken pinkie finger, but the versatile 6-foot-9 forward was fully cleared this week. Wilson projects to the forward spot in Michigan’s offense later in his career, but Beilein admitted he could factor into the equation at the five this season.

“I think there is a chance that he can play any position,” Beilein said of Wilson. “We are a long way from determining that, but his length, his shot-blocking ability, his skill level mean that he could be (a center). His down-the-road position is a forward. It’s like Zak Irvin last year; he wasn’t a swingman, but he did okay and now he’s migrated that way.”

It wouldn’t be the first time that Michigan has played a more traditional stretch four man at the five position. DeShawn Sims played significant minutes at the five position throughout his career, despite standing just 6-foot-8, 235 pounds. Evan Smotrycz also backed up the five position during his two years in Ann Arbor despite being renowned more for his shooting ability.

“(Wilson) was cleared right at the beginning (of the week), and I’ve liked what I’ve seen,” Beilein said. “He’s another guy who can multi-position at any of the three front-line spots. He has gained significant weight, good weight. We have been working on Sundays and Fridays and there’s a big gap in-between, so I look forward to getting some more consistency with what he’s doing, but he’s picked things up quickly as well.”

Wilson is listed at 6-foot-9, 220 pounds on Michigan’s roster and is the best athlete that Michigan has on its front line. His athleticism, combined with a 7-foot-3 wingspan, provides an element of versatility on both ends of the floor that Michigan’s other frontcourt players lack.

Michigan has options down low, but it also has questions. Four years ago, all of the same questions were being asked of Morgan. He answered the bell with the best statistical season of his career, but now the Wolverines will be hoping that the four-man combination of Donnal, Doyle, Bielfeldt and Wilson can do the same.