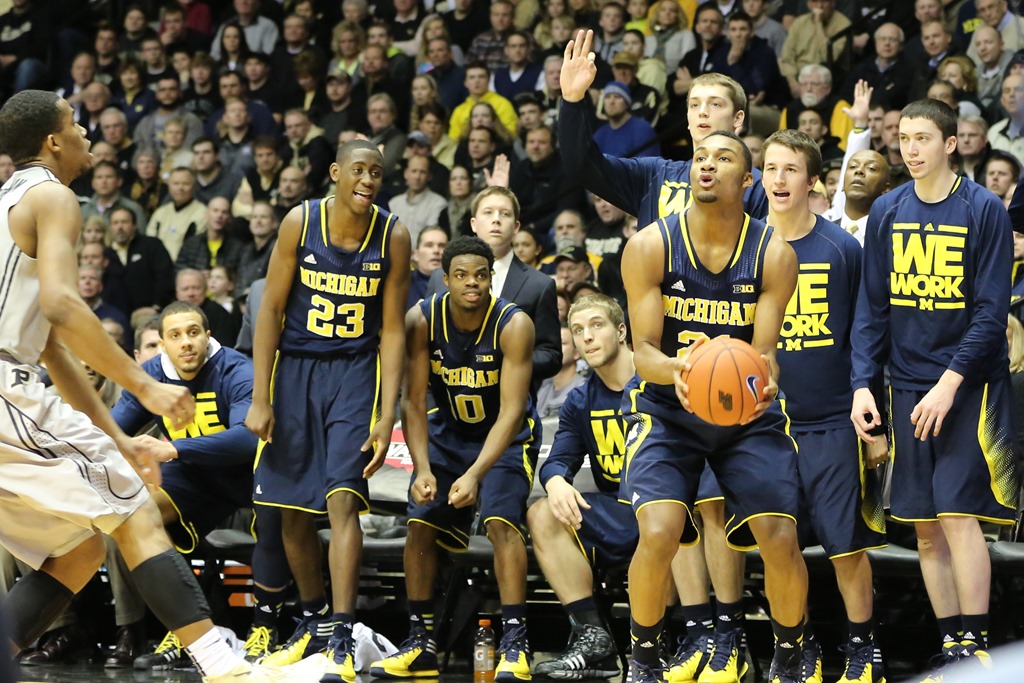 The name is Camp Sanderson, and the results are unquestionable.

Spend a summer with Michigan strength and conditioning coach Jon Sanderson, and you’ll reap the benefits throughout the upcoming season.

Nik Stauskas and Caris LeVert did it last summer. Trey Burke made the leap before his sophomore season.

Spend a summer in Camp Sanderson, and you’ll improve your vertical jump, or your sprint speed. You’ll certainly enter fall practices a much stronger player.

Since choosing to spend the summer months training with Sanderson in Ann Arbor, Irvin has added 15 pounds of muscle and five inches to his vertical leap, putting him in line for a breakout year.

“We all had the choice and opportunity to stay here, and I thought it would be best for me in terms of my development as a basketball player, whether that be agility drills or being in the weight room,” Irvin said Tuesday. “When we’re in the weight room, there are no days off and no slacking. We’re giving it 110% every time we are in there.

“I don’t want to be one-dimensional like I was last year, being just a shooter. I want to be able to shoot the ball from the outside and score easy baskets as well.”

Not that Irvin was a liability last season. He shot 42.5% on 3-pointers, averaging 6.7 points while coming off the bench in all 37 of the Wolverines’ games. He didn’t drive to the basket frequently, but then again, Michigan didn’t need him to. Stauskas, LeVert and Derrick Walton took care of that.

From a shooting aspect alone, Irvin should see some improvement from his already-stellar freshman campaign. Last season, the combination of his vertical and unconventional release made his shots difficult to defend. Add a few inches to Irvin’s release point, and he should have no issues finding looks.

But much like Stauskas expanded beyond his role as a spot-up, outside shooter in 2012-13, Michigan coach John Beilein expects Irvin to use his increased strength to diversify his offensive arsenal.

“He made big baskets for us as a freshman; so did Caris,” Beilein said. “Now, what’s the next progression? Getting in the lane, finding people and playing off the dribble.”

And early indications suggest he may do just that.

Irvin should move into a starter’s role at the three (left-side wing) while sometimes filling in at the four, positions he manned during the team’s 10-day trip to Italy over the summer.

Though the Wolverines faced severely overmatched competition overseas, the first look at Irvin post-Sanderson was incredibly promising. He averaged nearly 21 points while grabbing 7.8 rebounds per game, making 67% of his threes from beyond FIBA’s line that’s 16 inches longer than the college one.

Irvin didn’t need to drive to the basket, but he did that well on limited opportunities. And in addition to his newfound rebounding prowess, he improved as a defender, too. Perhaps the only area in which Irvin didn’t impress was in distributing the ball — he averaged just 1.3 assists on the trip.

As we heard ad nauseam last year, LeVert and Stauskas bulked up under Sanderson and improved across the board in 2013-14. While that has created lofty expectations for Irvin, Beilein isn’t downplaying them.

“He’s making a lot of the same strides that we saw Caris make from his freshman to his sophomore year,” Beilein said.

The prospect of a knock-down shooter who can rebound and attack the basket should excite any Michigan fan. Play Irvin alongside Walton and LeVert, and the Wolverines could have a trio of veteran slashing options who are also deadly behind the arc.

That’s the high standard LeVert, Stauskas, Burke and Hardaway have set recently. But Irvin believes he’s ready to become the next alumnus of Camp Sanderson to meet that bar.

“I was so one-dimensional last year, just being able to shoot the three,” Irvin said. “Versus this year, not only shooting the three, but actually getting to the basket, rebounding, helping the team in other areas on the court.

“One year under my belt, I have more experience, know more about the physicality I’m going to have to go against this year. I think I’m definitely going to be prepared after staying up here for the spring and summer.”