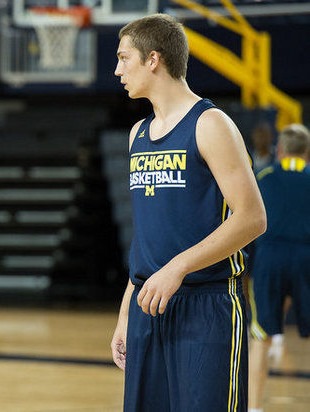 When Michigan’s coaches spoke to the team’s centers about expectations for the upcoming season, one of them wasn’t particularly impressed.

“Ricky Doyle, being a true freshman, said ‘Coach, that seems like a low expectation,’ ” assistant Bacari Alexander recalled on WTKA-AM (1050) on Wednesday morning.

Alexander had told the trio of Doyle, redshirt freshman Mark Donnal, and senior Max Bielfeldt that he hoped they’d combine for 15 points and 15 rebounds per game this year.

“There’s an ability to have an inside-out approach that allows them the ability to really be a threat from 15-17 feet,” Alexander said. “Because they’re young, we can grow that range over time to make those guys remind us of some of Beilein’s previous teams, when he had really deadly big men who could shoot.”

Much of that production will likely come the duo Alexander called “thunder and lightning”: Doyle and Donnal. And in contrast to Jordan Morgan’s dependance on the pick-and-roll, the Wolverines will have more versatility at the position this year.

Alexander seemed most excited about Doyle, the thunder, who took a “Rocky Balboa approach to his development” this summer. The freshman implemented strength and conditioning coach Jon Sanderson’s program back at home and then arrived on campus months earlier than required. Now, Doyle is a “contact-seeking bruiser” who has the ability to finish with both hands over traffic.

“The other thing that Ricky Doyle brings to the table different from Mark is a true, back-to-the-basket threat,” Alexander said. “He can operate in small spaces, really welcome contact and relish it.”

Meanwhile, Donnal improved physically throughout his redshirt season, showing flashes of his potential — both in the post and with his slick jump shot — to fans at an open practice before Michigan’s Sweet Sixteen matchup in March.

This summer and fall, Donnal has impressed Alexander with his ability to distribute the ball out of the post.

“What we’re trying to do now is continue that momentum this year and develop consistency,” Alexander said.

But on Thursday, Beilein warned not to dismiss either player’s perceived weakness.

“I wouldn’t discount Mark’s inside game or Ricky’s outside game,” Beilein said. “The perception would be that one is one thing and the other is the other thing, but I think both have the ability to play the other’s game and that’s what we’re working on.”

Alexander hopes Donnal and Doyle, plus Bielfeldt, develop into big men who fit Beilein’s offense the best, something Michigan didn’t have in Morgan or Horford: someone who is solid under the rim but can also hit a mid-range jumper.

“If you can develop those guys to a level where they keep defenses honest with the ability to do that, which all three of the players have shown early on, it give us a different dimension,” Alexander said. “It gives us an opportunity to explore some different things.”

If you think Caris LeVert looked like a completely different player last year, you’re not alone.

LaVall Jordan is stunned the now-junior is the same person who stepped on the court as a freshman.

“Guys that understand and learn how to hesitate and evaluate. That’s where Caris’ pace from freshman year to now — I told him this during the summer, I said, ‘I can’t believe I’m watching the same guy,’ ” Jordan said.

After adding muscle before 2013-14, LeVert became one of Michigan’s biggest offensive threats, mixing his abilities from beyond the arc with an increased knack for driving to the hoop.

This year, coaches look to the soft-spoken guard as one of Michigan’s leaders. But LeVert has continued to make strides on the court, too. Outside of improving his mid-range game, LeVert’s biggest area of focus is in improving his decision-making while attacking the basket.

“One of the things he’s been studying is how to make easier decisions once he does get two feet in the paint,” Alexander said.

One of Kameron Chatman’s biggest assets could come from an inherent trait: He’s a lefty. And that will allow coaches to open up Michigan’s offense even more than in previous years.

“We have an opportunity to expand the court,” assistant Jeff Meyer said. “We played a lot of left-to-right with Nik, with Trey, with Derrick, now with Caris. That’ll give us a chance to play a little right-to-left with Kam, which should open up the court for us even more — if you can imagine that — offensively.

“Kam is a playmaker. His vision on the court is very good.”

In Italy, Chatman struggled to a 47.5 eFG% as a starter at the four, but he otherwise looked comfortable in the Wolverines’ offense.

Meyer explained that Chatman needs to become a more physical player, but “he plays the game the right way.”

The forward is invested on becoming a better shooter, and in Italy, Michigan “caught a glimpse of what he can bring to the table.”