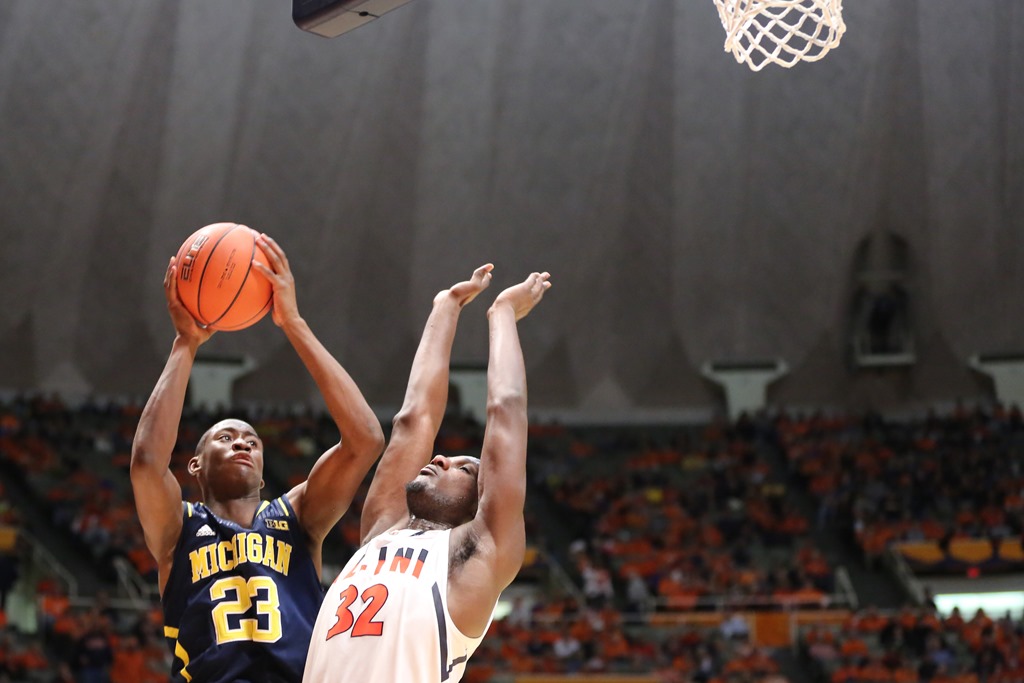 Three years ago, Michigan won the Big Ten with a starting lineup that measured 6-1, 6-3, 6-5, 6-4 and 6-8. The Wolverines were one of the smallest teams in the country and while they certainly rebounded like it, they also found a way to win.

Since then, John Beilein has been forced to overhaul his roster almost every season. The only players from that roster still playing college basketball are doing so at other schools. In its place is perhaps Beilein’s best combination of length and versatility yet. The Wolverines can now lean on a starting lineup that measures: 6-1, 6-7, 6-6, 6-8 and 6-9.

For all of the questions about Michigan’s youth and inexperience this season, there’s a lot to like about the roster that John Beilein has constructed. It’s tough to say how they’ll all fit together, but it’s clear that there’s a very flexible group for Beilein to develop.

“We have guards, we have forwards and we have a guy that plays in the middle. Sometimes we will have four guys out there at one time that are guards,” Beilein said. “Because of Kam’s ball-handling ability, I think he can play a lot of positions. This may be one of our more versatile teams.”

Caris LeVert is still Michigan’s most versatile player. LeVert grew to 6-foot-7, 200 pounds this offseason, according to Michigan’s official roster, and should be able to moonlight at any position in the backcourt or on the wings. His home will be the two-guard spot and he’s one of the top pro prospects in the league due to his ability to create off the bounce and knock down the three-point shot.

LeVert will be flanked by another wing guard with size, Zak Irvin, but beyond its returning players, Michigan’s younger players will add a lot to the table. The Wolverines might not have the most size with respect to interior girth and athleticism, but junior guard Spike Albrecht is impressed with the group.

“I think people will have a lot to like with our freshmen, and the versatility they bring,” Albrecht said. “We have a lot of length and athleticism this year and it’s exciting to be a part of.”

Albrecht has played alongside Trey Burke, Nik Stauskas, Mitch McGary, Glenn Robinson III and Tim Hardaway Jr. during his two years in Ann Arbor, so it’s safe to say he knows a little something about length and athleticism.

Kameron Chatman headlines the incoming class and is the sort of five-tool player that John Beilein used to only dream about early in his tenure in Ann Arbor. He’s an ideal fit because his left-handedness allows Michigan to initiate more offense from the right side of the floor. Given his ability to shoot, pass and rebound, you’d be hard pressed to find a better fit for the four position in Beilein’s offense than Chatman and he has the potential to be much more.

“He’s going to play both forward positions, and if we ever got stuck he could play in the backcourt,” Beilein said. “He has done some really good things and all of the freshmen are okay. What happens when we string two or three weeks together? This summer, even though we did get to practice, it was at like seven o’clock at night after a day of classes and study hall. When we can put practices back-to-back it’s going to be really exciting to see his development.”

While he might be drawing the most praise, Chatman isn’t Michigan’s only versatile option. Beilein has different choices with different skillsets at the five position. Ricky Doyle can bang around the basket while Mark Donnal can step out and knock down the 16-footer. DJ Wilson measured in at 6-foot-9 with a 7-foot-3 wingspan, he has the ability to play the four or the five down the road and might be Michigan’s top long-term prospect.

The Wolverines have steady and experienced options at the point guard in Derrick Walton and Spike Albrecht, but Beilein has interesting wing guard options in reserve. Freshman Aubrey Dawkins is one of Michigan’s best athletes while Muhammad-Ali Abdur-Rahkman is one of its best off-the-dribble creators.

Entering last season, there were very few, if any Michigan players that didn’t know their roles. The Wolverines sophomores had played key roles in a Final Four run and the freshmen that would be thrown into the mix were asked to do the one thing they had done for their entire lives (run the point guard position or shoot threes). This year, there might be a few too many moving pieces to avoid some early growing pains. But, given Beilein’s track record, it’s tough to imagine that he can’t find the right mix for his young roster to excel by year’s end.