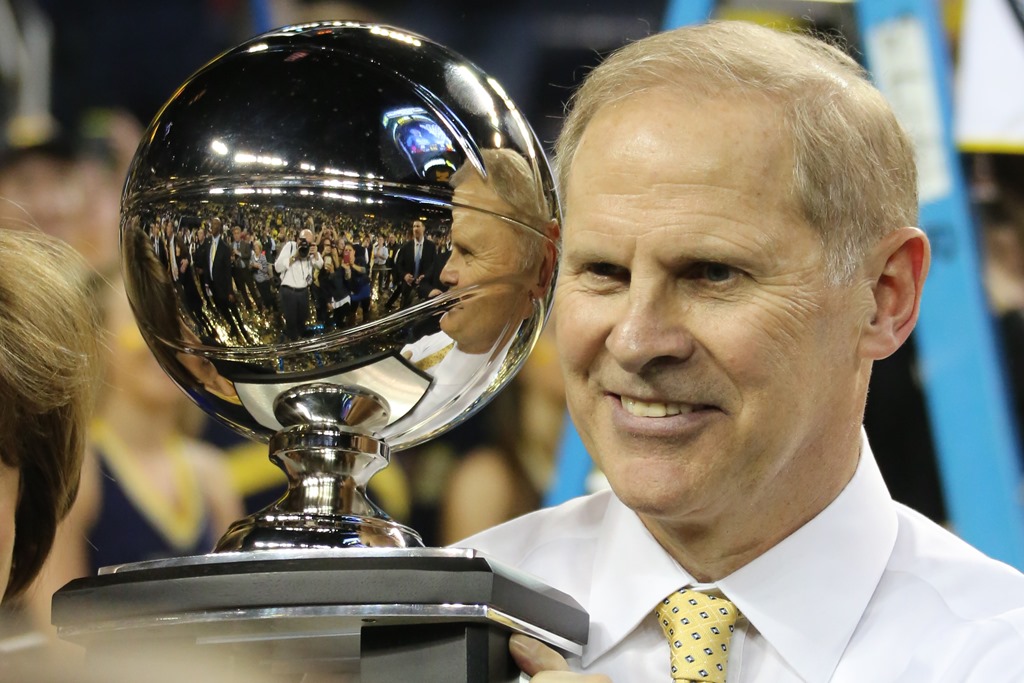 John Beilein was on the podium this morning in Chicago to preview Michigan’s upcoming season at the annual Big Ten Media Day. Beilein spoke about Caris LeVert, expectations, the desire to get back to the Final Four and Michigan’s Italy trip. (Photo: Dustin Johnston)

JOHN BEILEIN:  Well, it is good to be here and get the season going again.  We’ve been practicing for a little bit, but October 15th, yesterday, was the first day we really opened up camp and said we’re in it now.  This is the time of the year to get the media and all our obligations out of the way so we can really concentrate over these next four weeks to get ready for our first game.

Q.  Caris LeVert named first‑team, how do you think he’ll handle the spotlight this season?
JOHN BEILEIN:  Well, you never know.  He was in it a bit last year.  I mean, there were several games where we just went to him because people were doing things with Nick or with Glenn, Jordan Morgan, Mitch, so we just went with him.  He’s sort of used to it.  I love his personality because he doesn’t let things bother him very much, so I don’t think he gets too excited or he gets too worried about either situation.

Q.  John, what are some of the challenges a coach faces trying to get back to the Final Four a second consecutive year?  You know what that was like last year, obstacles, expectations?
JOHN BEILEIN:  Well, yeah, it is.  It’s obviously difficult to get there.  At the same time, once you’ve been there one time, and I assume you’re talking about Wisconsin, I’m as hungry or probably hungrier than ever to get back there.  So I think it’s great motivation for everybody because they’ve experienced that run.  It’s maybe not getting there, it’s the way you get there and how you get there and those moments in between, the journey.  It makes it so valuable.
So yes, it’s hard.  You’d like to stay injury‑free, and you also have to‑‑ you’re going to have‑‑ I don’t care who you are, it’s very normal to have times during that year where you’re not going to play well.  You won’t look like a Final Four team, and that’s exactly what you may need in February or late January or even in March.

Q.  I wondered during your career if you’ve had teams where you’ve had a lot of seniors and a lot of freshmen and not a lot in between, and how do you coach‑‑ what are the dynamics of that kind of team and how do you try to coach it?
JOHN BEILEIN:  Just a few times.  Unfortunately, the seniors‑‑ we haven’t had many seniors.  We’ve had one or two each year.  But I do remember one year we had a team with five seniors on it that had a great year with young players, but they were tremendous leaders, and they wanted to‑‑ they just wanted to win.  They’d given up a lot of personal goals to just win.  That was a lot of fun to coach them.  It was at Richmond, my first year at Richmond, and I believe the same thing in my fourth year at West Virginia, we had five seniors then, as well, and they had experienced a little success and they wanted more of it.  They had a tremendous year.  But I think, once again, going back to the last question, they’d been part of a journey there, and they really wanted to finish it the best they could.

Q.  You have a lot of freshmen on this roster.  With the Italy trip in the preseason, how much did that help kind of get this group together heading into‑‑ you said yesterday really getting started with camp?
JOHN BEILEIN:  To have these foreign trips is such a great experience for these young men, not just basketball‑wise, but the things that they can learn unrelated to basketball are incredible.  So I think we grew as a team just with this, a whole new sense of appreciation of the world, and the different cultures that are out there that we don’t even think about.  So as a result, that was really valuable.  That’s a great time that our team bonded, but it also gives a little snapshot of who could do what in short prep.  Going into it, you’ve got to be careful not to hurry ourselves because we had that experience, but at the same time we can move a little faster than we have in the past.

Q.  I was wondering if you could talk about Spike and how you’ve seen him develop since he got on campus, particularly from last season to this season?
JOHN BEILEIN:  It’s amazing the confidence he has shown since the day he walked in the door.  I mean, even when he came for his visit where he was what some people thought was an unlikely recruit, he was laughing about how unlikely people thought this was.  And then every time he walks on the floor, he just‑‑ he’s got incredible confidence that “I can play at this level,” and he’s shown that so well.  He’s a pleasure to coach.  He’s become a really excellent team leader right now.  I’m really leaning on him to be the pulse of the team.

Q.  With these foreign trips, how do you handle those, and also when you start to get your team ready for the season, how much does the fact that they had that experience, they put some games into their legs in August or whenever they made the trip, how does that factor into the way you approach your preseason?
JOHN BEILEIN:  Well, the ten days of practice are great for just working at the fundamentals, but you can’t put in the type of work that you do in a normal year.  You give them more concepts rather than‑‑ you talk about the fundamentals.  You wouldn’t be able to train it as well because you don’t know what you’re going to see, and now you come out of that and you can really sort of look at the big picture.  You have a better evaluation of your team, and now your preseason practices should be more on point than they normally would be because we have information that we would have no idea or wouldn’t have known until two or three weeks into the season.