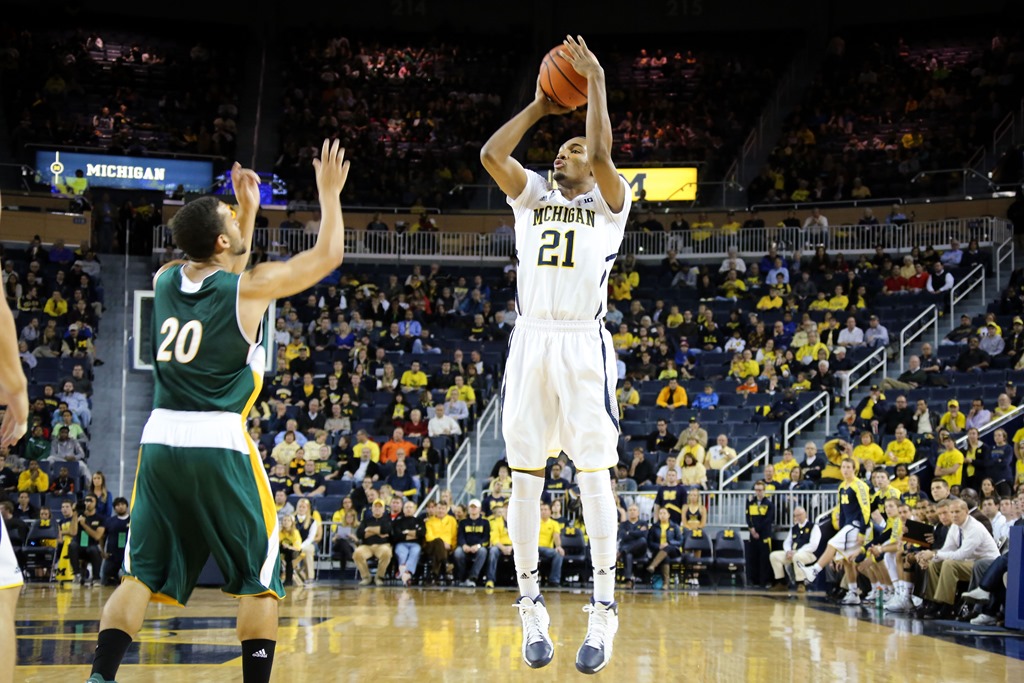 Zak Irvin was Michigan’s sixth man last season, but he never had trouble making himself noticed on the floor.

When Irvin checked into the game he was ready to do one thing: shoot, and then shoot some more. Irvin shot the ball on 25.9% of Michigan’s offensive possessions while he was on the court. That’s more than Nik Stauskas, Caris LeVert or Glenn Robinson III, the focal points of last year’s offense.

If there’s anyone that should be comfortable with a dramatic increase in offensive opportunities it’s the 6-foot-6 scorer from Fishers, Indiana.

Irvin played just 15.4 minutes per game last season and is very likely to double that this year. If he does double his playing time and produce at a similar level, his scoring average would project to 14 points per game and he could realistically push toward 300 three-point field goal attempts after averaging over 10 3-point attempts per-40 minutes last season. While that’s nowhere near the Division I record of 395 it would crush the Michigan record of 222 3-point attempts set by Robbie Reid in 1999.

Efficiency doesn’t follow a linear relationship with usage and Irvin’s 42.5% three-point shooting could certainly regress with double the chances, but he still seems like a safe bet to lead Michigan in three-point field goals and attempts. Dan Hanner and Luke Winn ranked Irvin No. 3 among the country’s most likely breakout candidates for just that reason.

Caris LeVert, Michigan’s assumed leader this season, is confident that Irvin is capable of sliding into the No. 2 scorer role in the offense.

“You don’t have to talk to Zak about (an increased role),” LeVert said. “Zak’s the kind of guy that’s ready for those situations. He’s a very aggressive guy, really good player. I think he’ll show this year parts of his game that people haven’t seen.”

It’s those parts of his game that we haven’t seen that are the real question. Irvin is capable of a great season via his shooting and scoring ability, but the bigger question facing him is whether he can do more. While Irvin is likely to be one of Michigan’s go-to scorers, he has a long way to go in other areas of his game.

As a freshman, Irvin only attempted 50 two-point field goals, connecting on just 46% of those attempts. Of those 50 attempts inside the three-point line, just 14 were inside of 5-feet from the basket.

Irvin was also Michigan’s worst defensive rebounder, grabbing just 7.7% of opponents’ missed shots while he was on the floor. That’s worse than both of the Wolverines’ 6-foot point guards Derrick Walton and Spike Albrecht.

He’s really worked on his explosion and his body,” Michigan assistant Jeff Meyer said during a radio interview last week. “Because of the strength development and explosion, he averaged seven-plus rebounds per game (in Italy). He is going to get the basketball with both hands on the glass, offensively and defensively. He did not do that a year ago. It was not a thought.”

Irvin spent the summer at Camp Sanderson, working on his strength and conditioning and the results appear to have paid dividends. He’s added five inches to his vertical leap and 15 pounds, pushing his listed measurements to 6-foot-6, 215 pounds. That increased size and athleticism could also manifest itself on the defensive end.

Despite being praised by John Beilein throughout last season for his defensive potential, Irvin was rarely a game changer in that department. He struggled at the four against bigger players and never showed the consistent quickness to guard faster wings.

Improving his offensive versatility could be just as important. For all of the positives that Irvin provided, he was very much ‘just-a-shooter’. Irvin didn’t do much other than shoot the ball when he was on the floor. His assist rate of 4.7% and his free throw rate (FTA/FGA) were also lowest on the team last season.

“He’s making a lot of the same strides that we saw Caris (LeVert) make from his freshman to his sophomore year,” Michigan coach John Beilein said last week.

Irvin played his role perfectly as a freshman, but he’ll have to do much more as a sophomore. He also has the unenviable task in following in the footsteps of someone who did just that, Nik Stauskas. Expecting Irvin to be Stauskas is unfair, but there’s also a comfortable middle ground where Irvin could settle into a terrific sophomore season.

Bottom Line: Predicting Zak Irvin to breakout is almost too simple. His efficiency numbers were very good last season and the only reason that he didn’t play more minutes was because he was sitting behind Nik Stauskas, Caris LeVert and Glenn Robinson III — three players that are or will be playing for paychecks. Sharing the wing with Caris LeVert (and to a lesser-extent Kameron Chatman), should provide Irvin with enough freedom to focus on doing what he does best rather than trying to be something he’s not. Considering he made twice as many (33) shots as he missed (15) in Italy, it’s safe to say that Zak Irvin is headed in the right direction.